A Tale of Two Tombstones – Alexander Hossack and Isobel Holm

text by Dr Jim Mackay; photography as annotated under each image

The date on an old gravestone can be very misleading. We have on display a broken slab to the south east of Kirkmichael which reads: 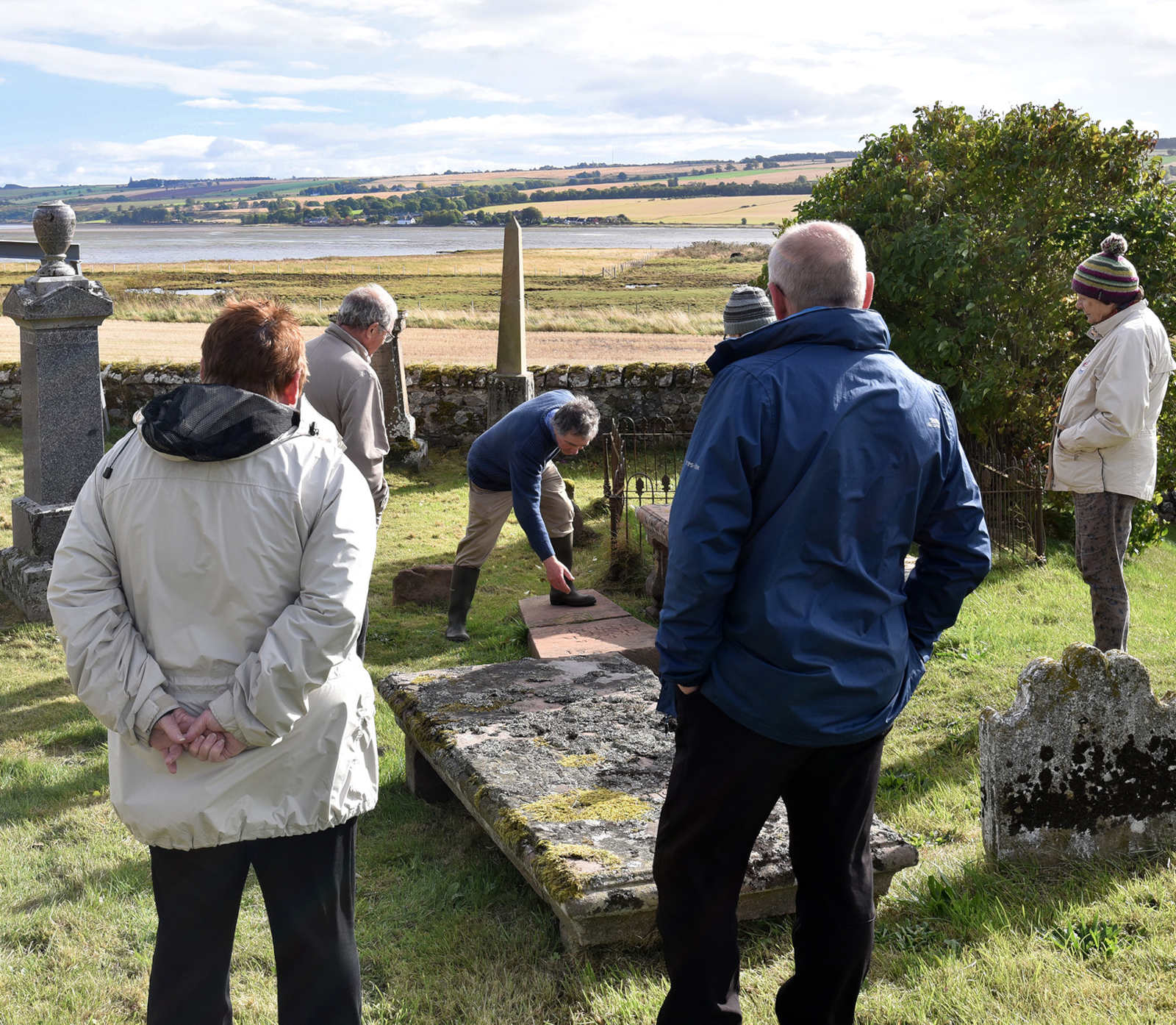 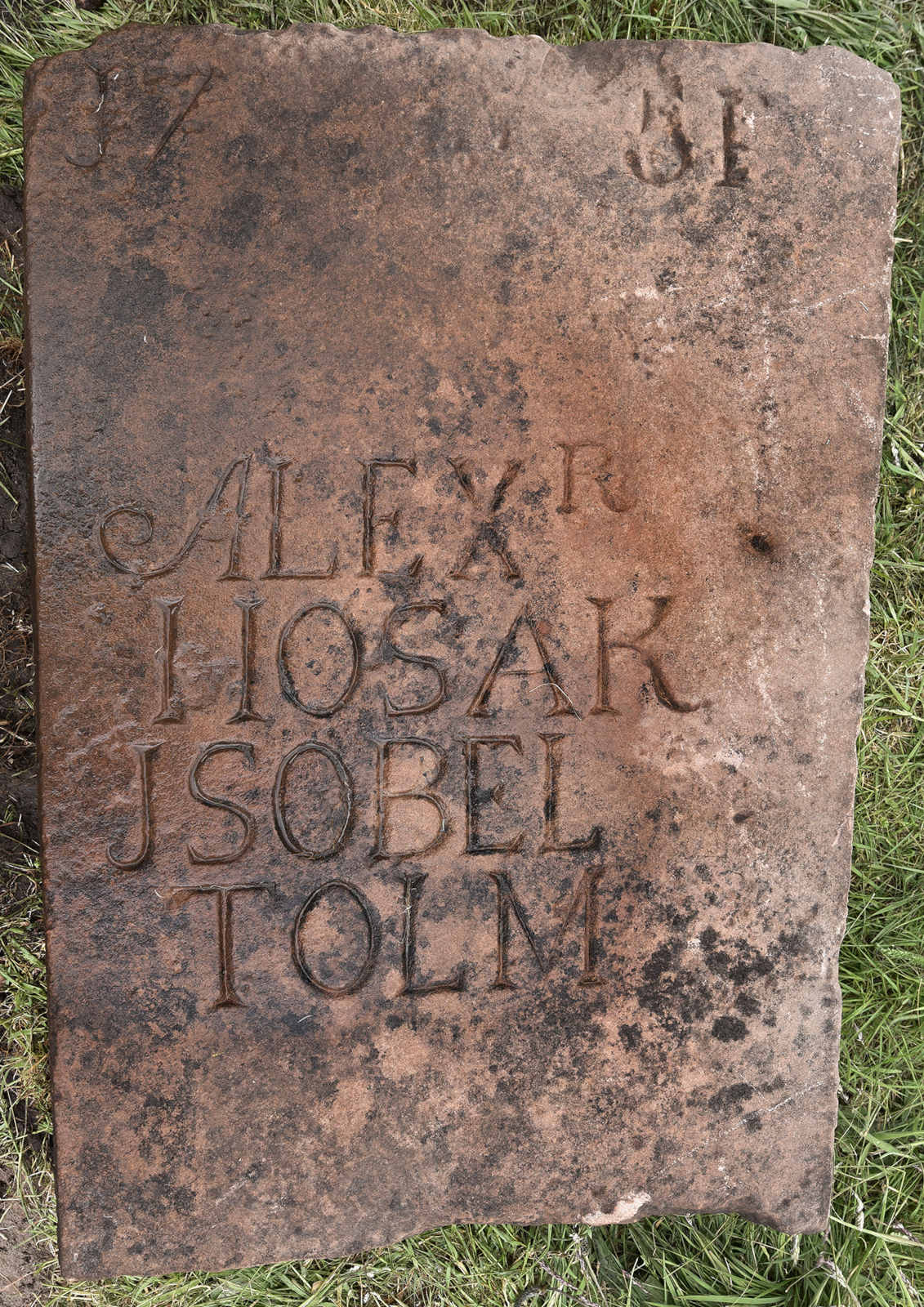 Discovery of the Stone

We were surprised to find this slab. We had been dismantling a blank tablestone that was in a dangerous condition. It was leaning over and threatening to collapse. We had used the Kirkmichael Gantry to lift the tablestone top, rotate it and slide it well out of the way. 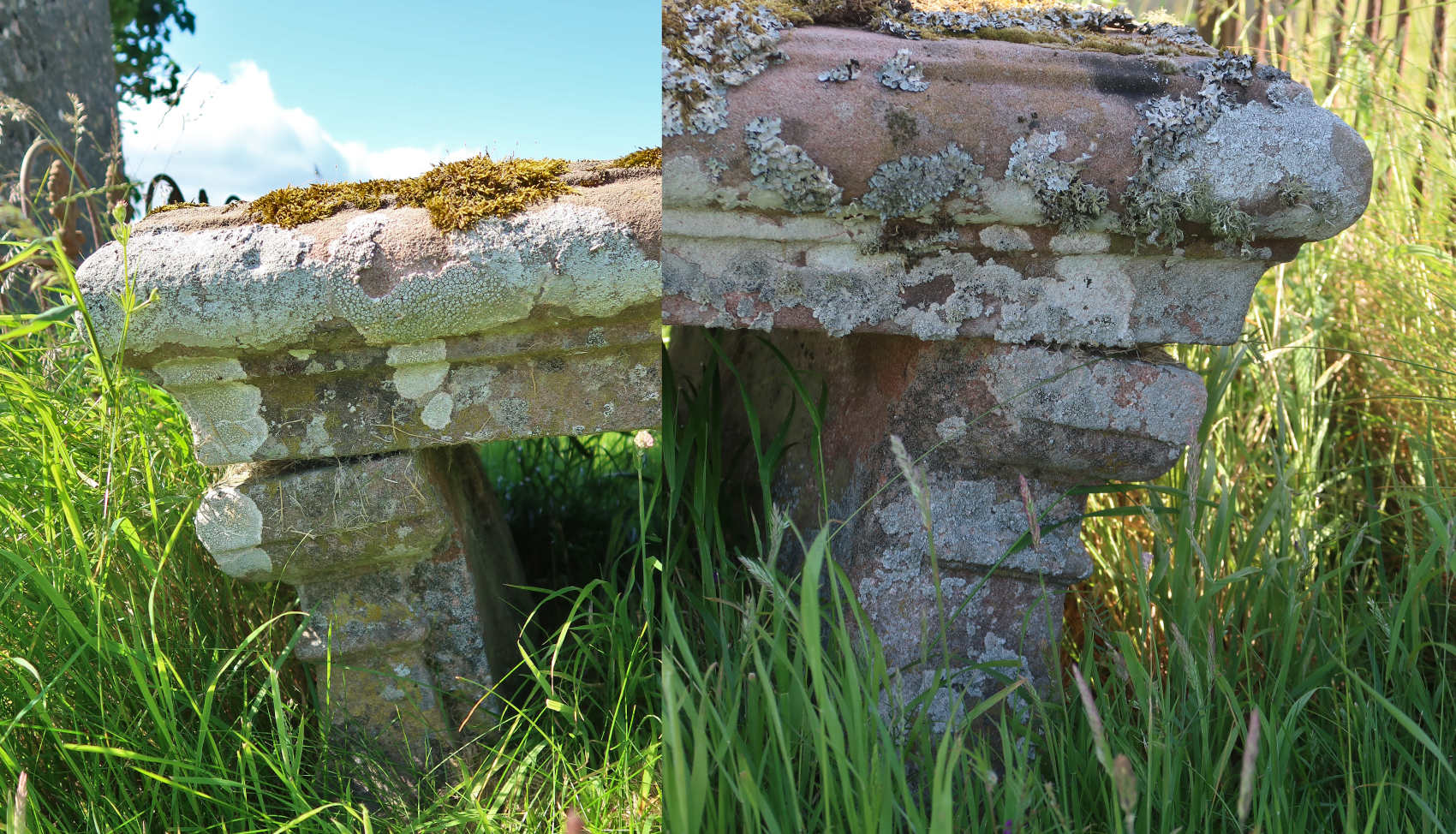 the problem of unstable tablestone legs; photos by Andrew Dowsett 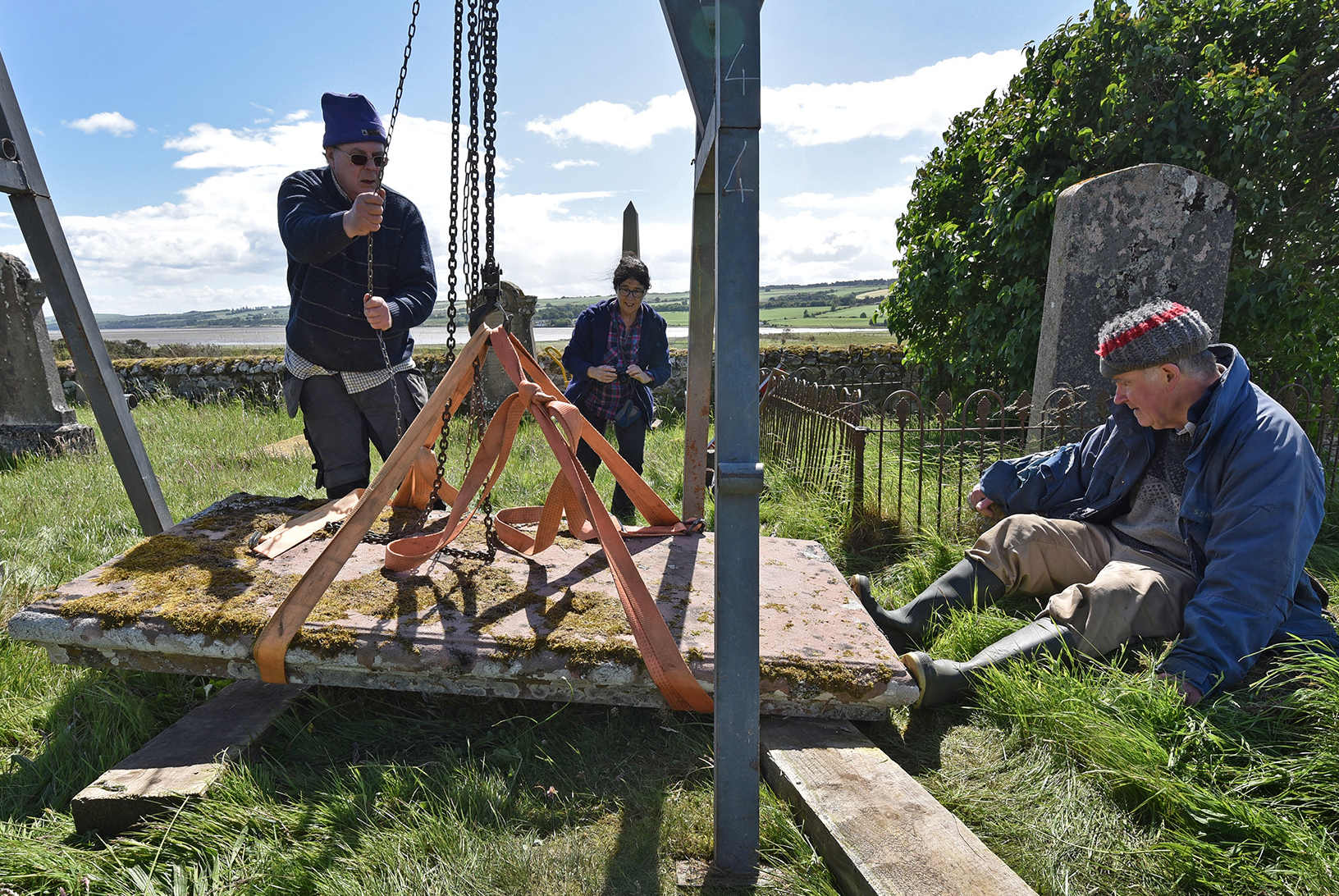 moving the tablestone slab out of the way; photo by Davine Sutherlandt

We had lifted out the two supporting legs and put them to one side. And then we had excavated the foundation slabs from under the legs. These are usually either purpose-made sandstone slabs or cast-offs. 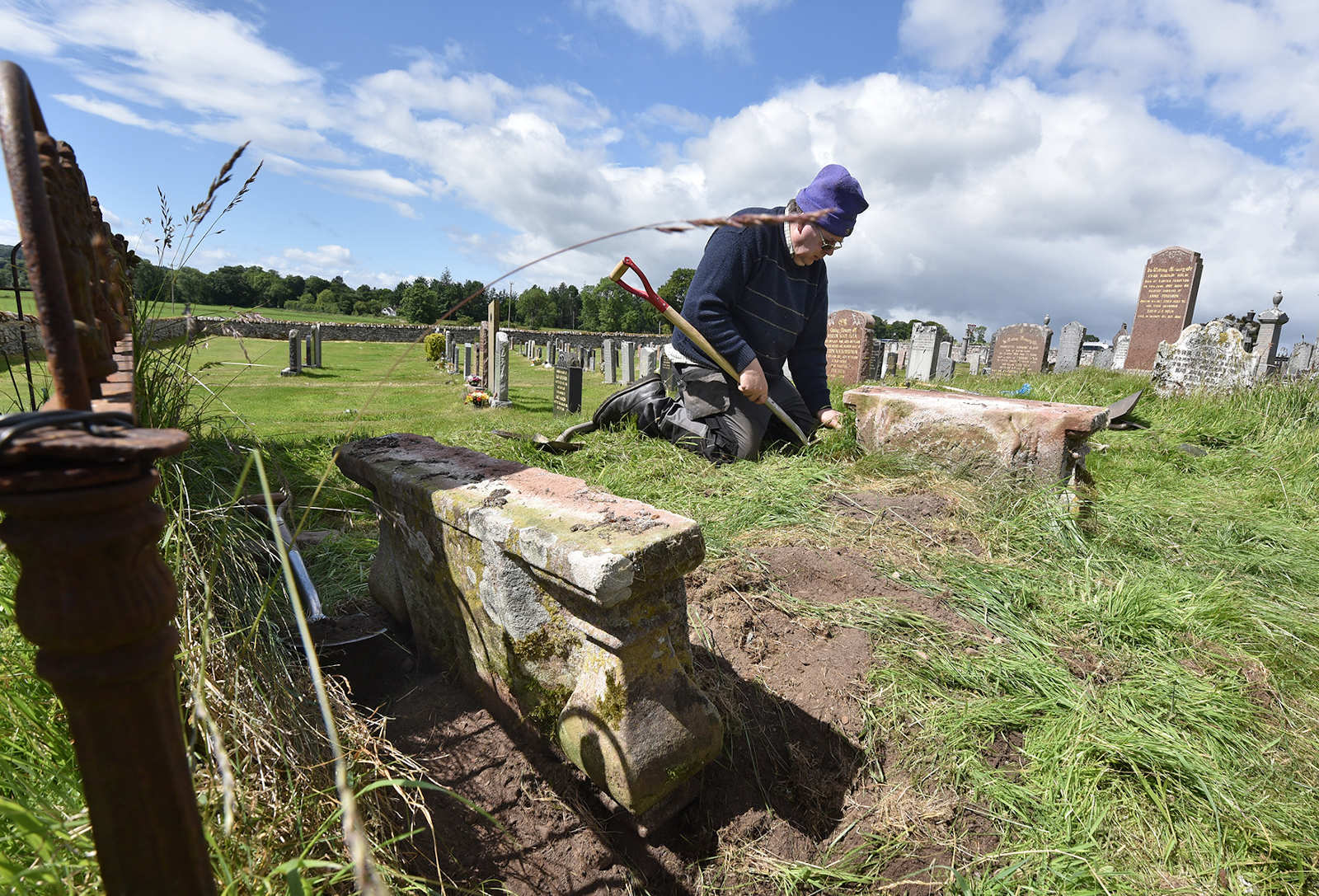 we start to remove the legs of the tablestone: photo by Andrew Dowsett 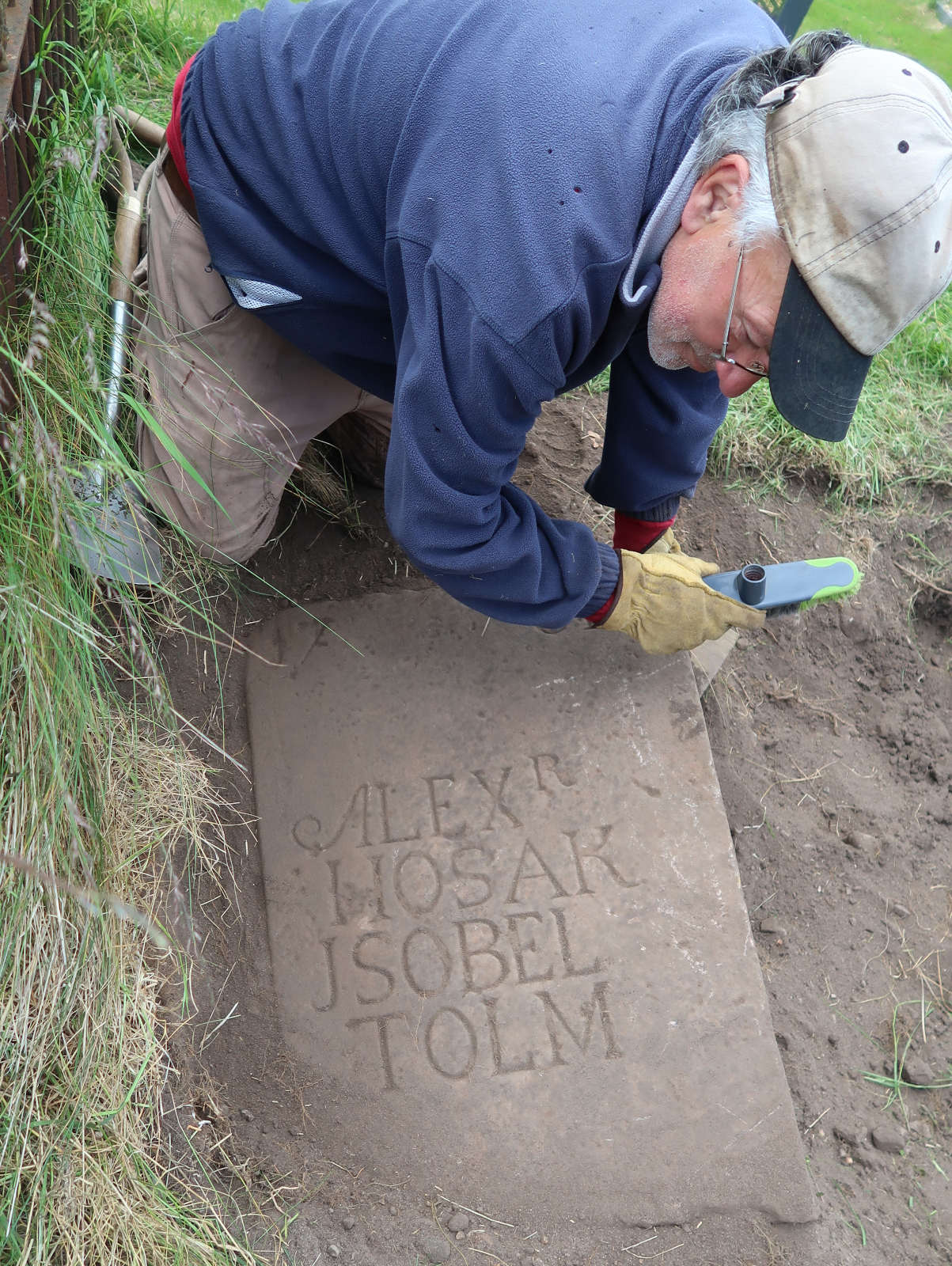 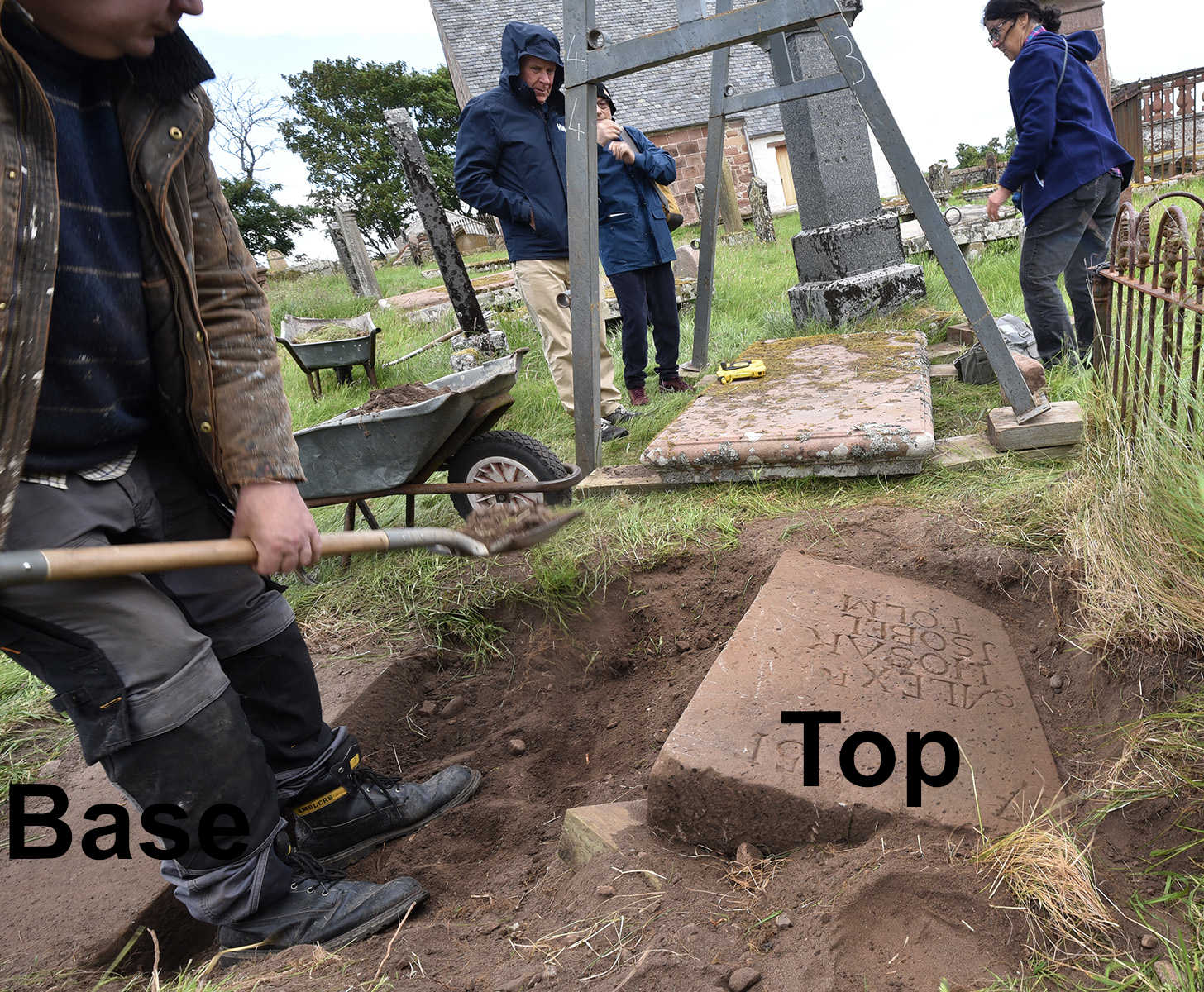 the two halves of the slab acting as foundation stones; photo by Andrew Dowsett

The old slab had been broken with considerable force. The two points where the chisels had been driven in can still be seen clearly. 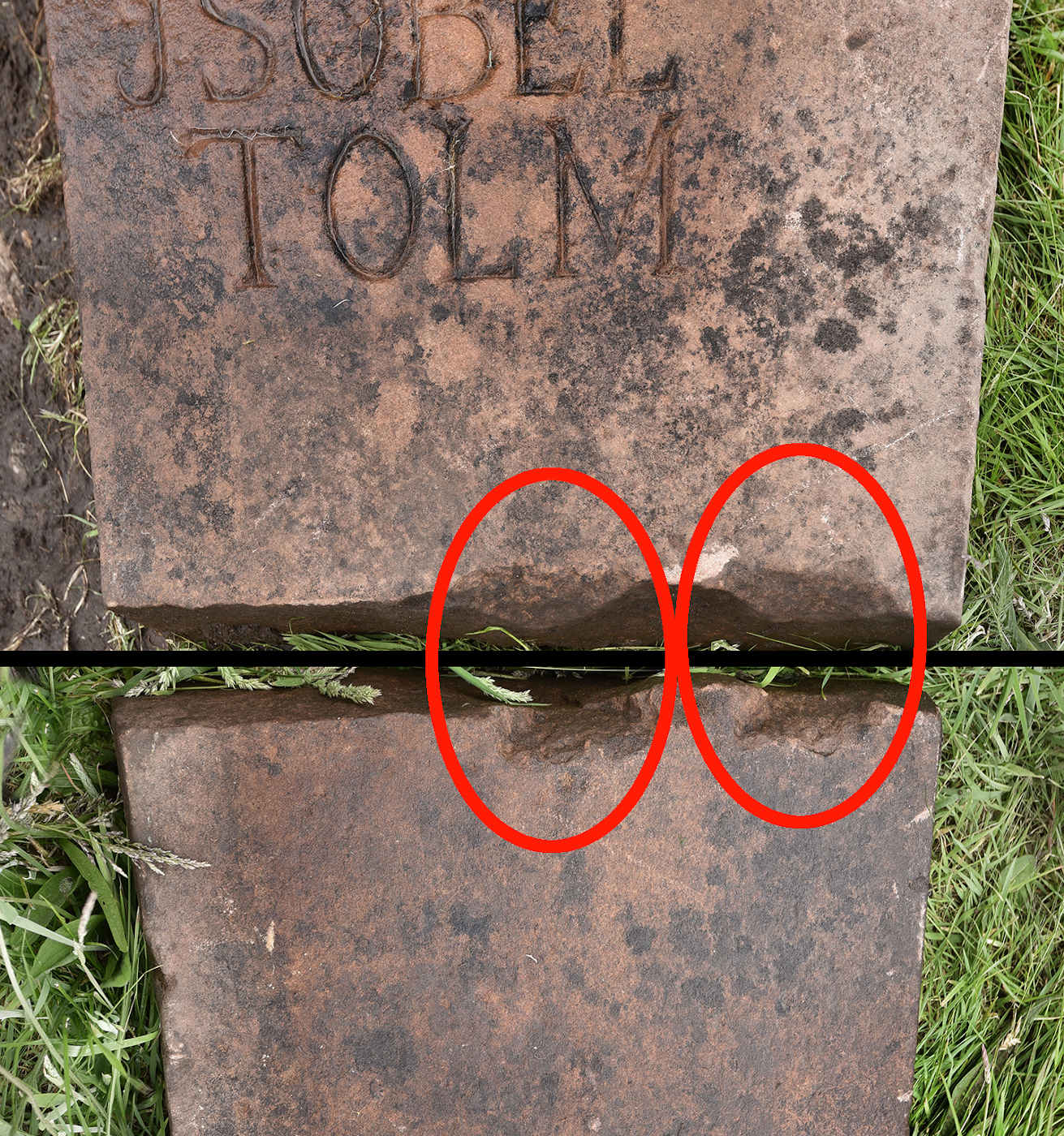 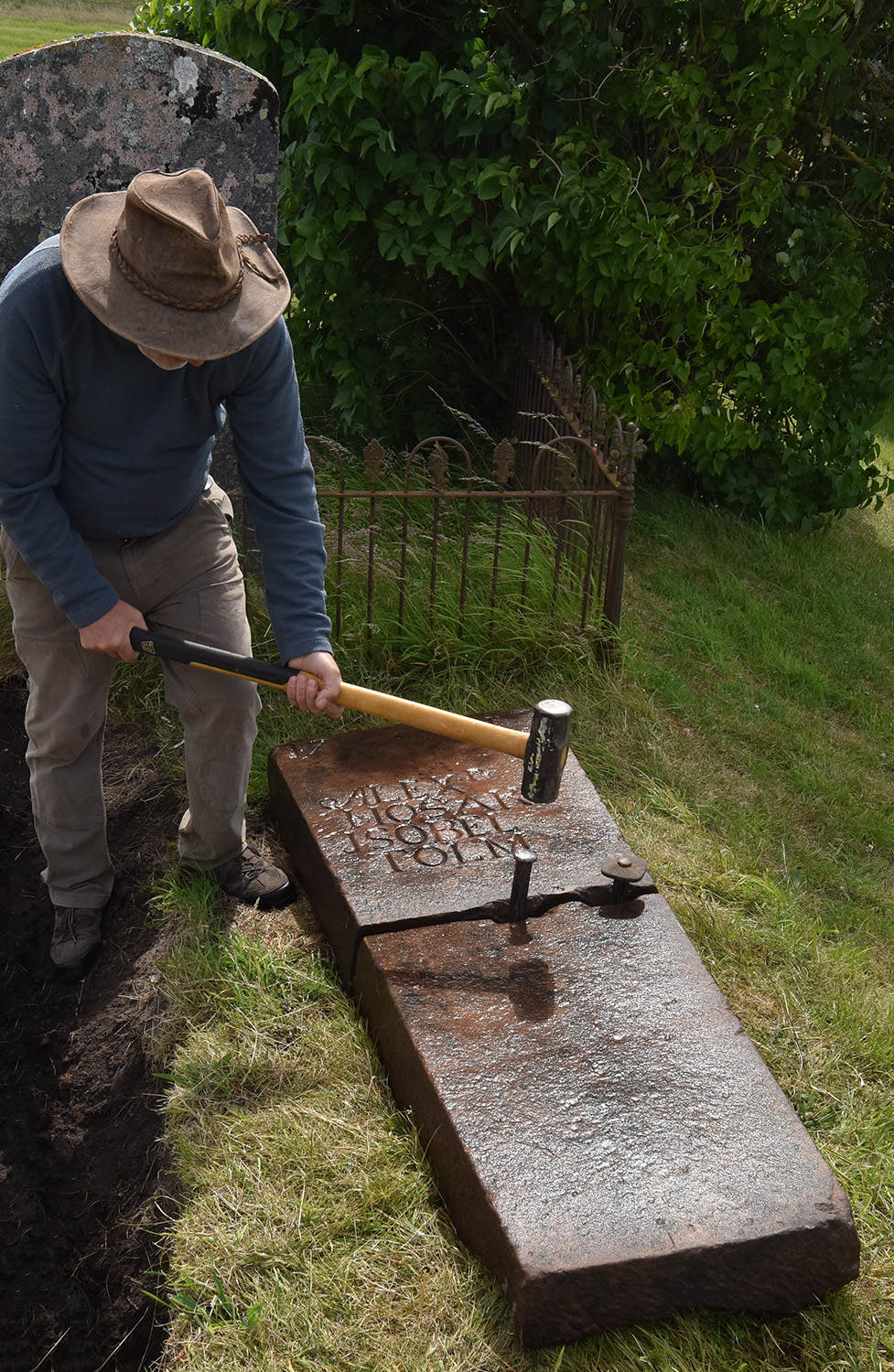 Andrew demonstrating how the slab was broken; photo by Jim Mackay (but set up by Andrew)

Having recovered the two halves of the slab, we then debated what to do with it. The obvious thing was to replace them as foundation slabs for the tablestone, but as they had failed to work satifactorily before and as it was a shame to bury them again, we decided to put in a brand-new concrete foundation running the entire length of the tablestone to ensure the legs did not threaten to collapse once more. But what to do with the two halves? Anyway, we shifted them out of the way before re-erecting the tablestone to clear the space. 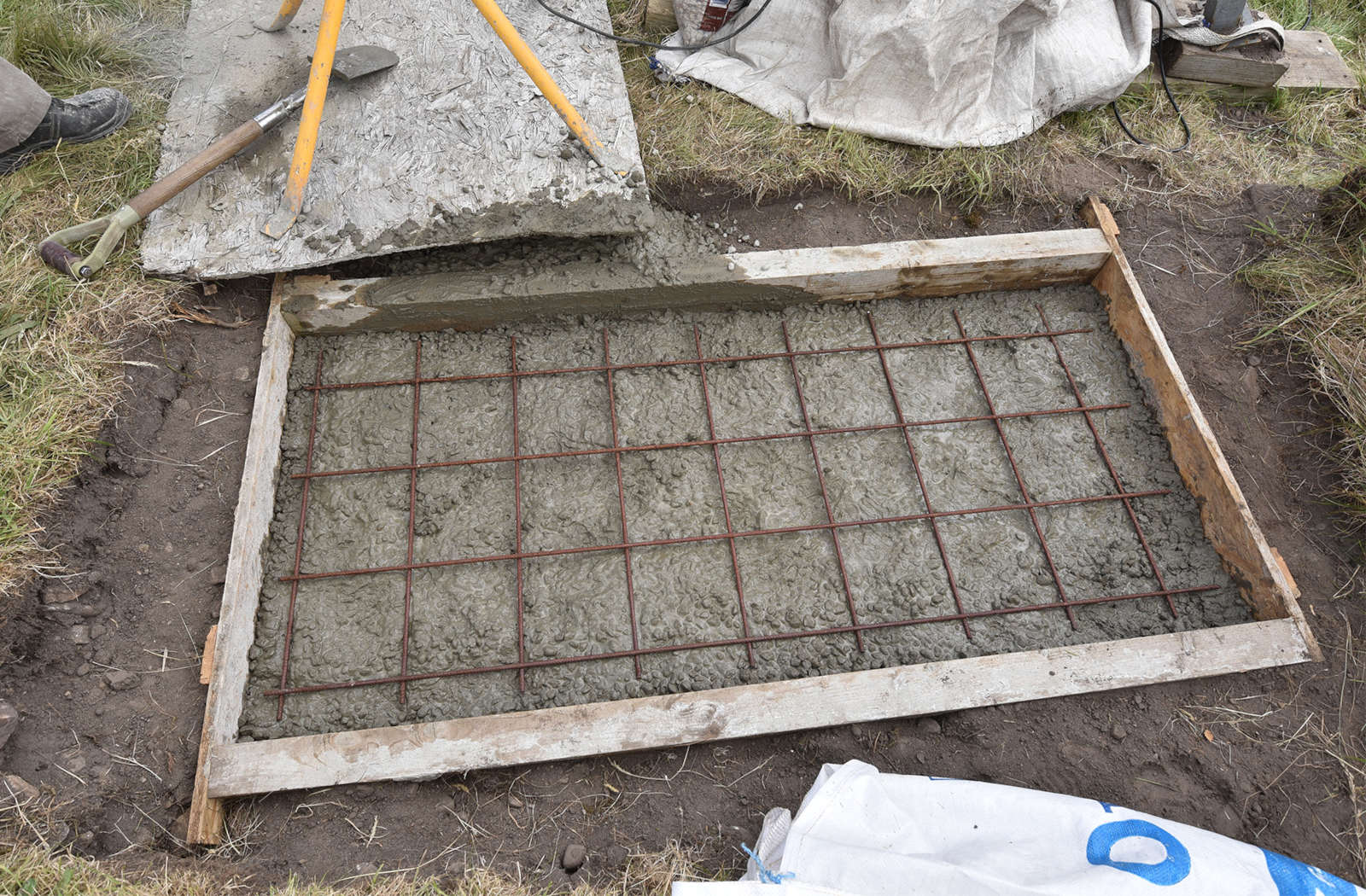 a new foundation, complete with rebar goes in; photo by Andrew Dowsett 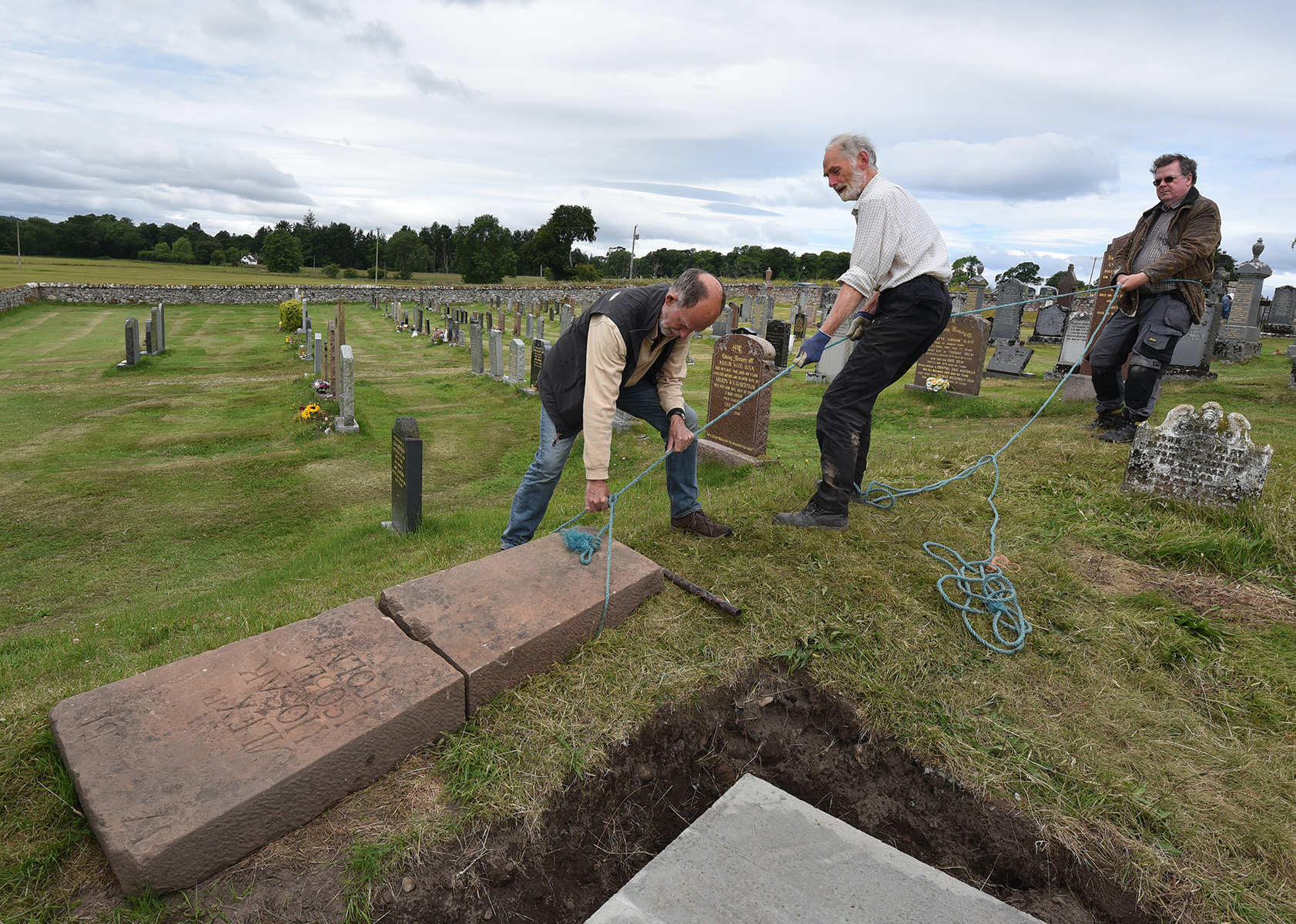 and the broken slab is moved out of the way before we rebuild the tablestone; photo by Andrew Dowsett

After much discussion, and in the absence of anywhere better to put the halves, we simply placed the two halves together beside the restored tablestone. The slab has become an interesting story in itself. 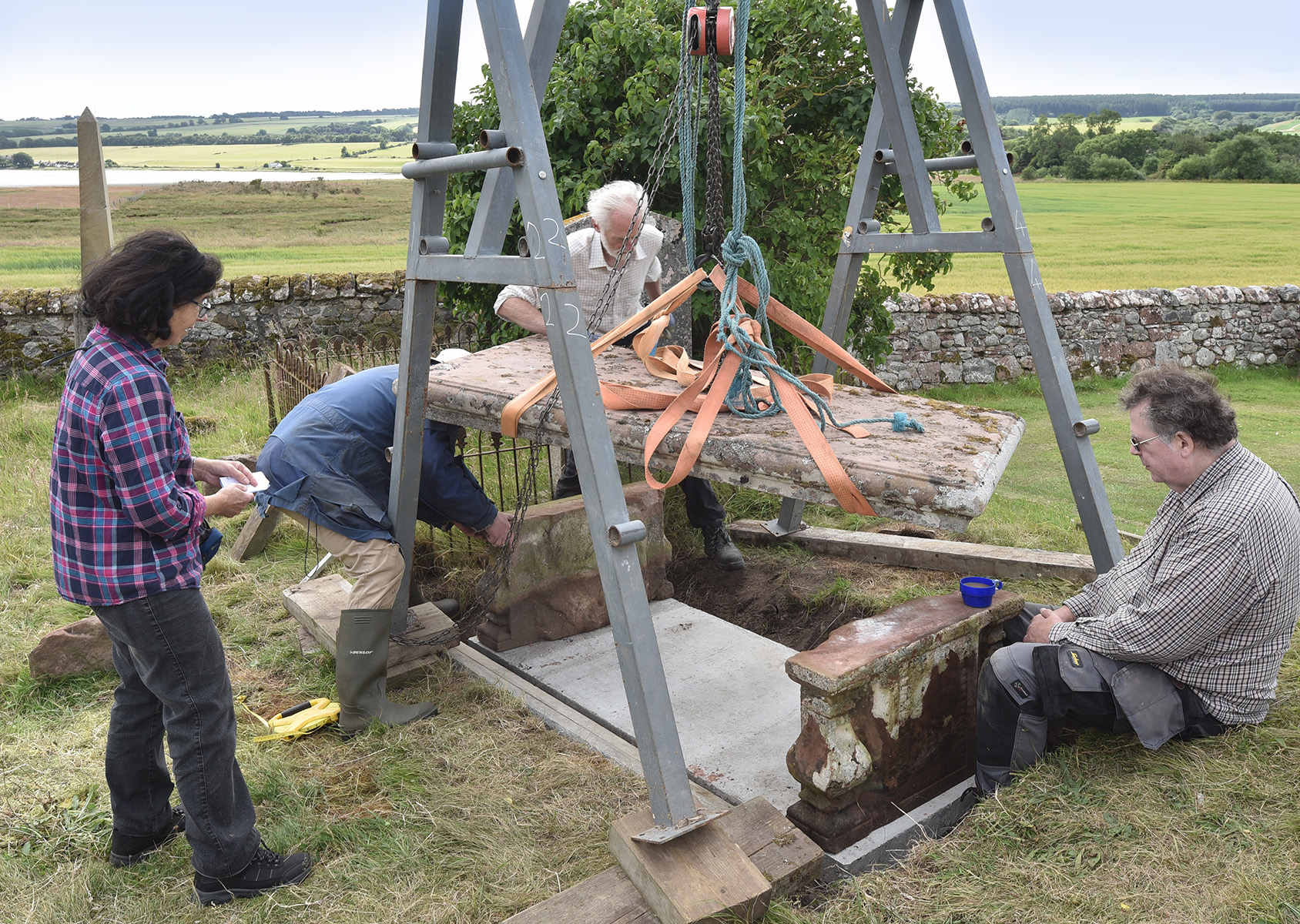 the tablestone being restored; photo by Andrew Dowsett 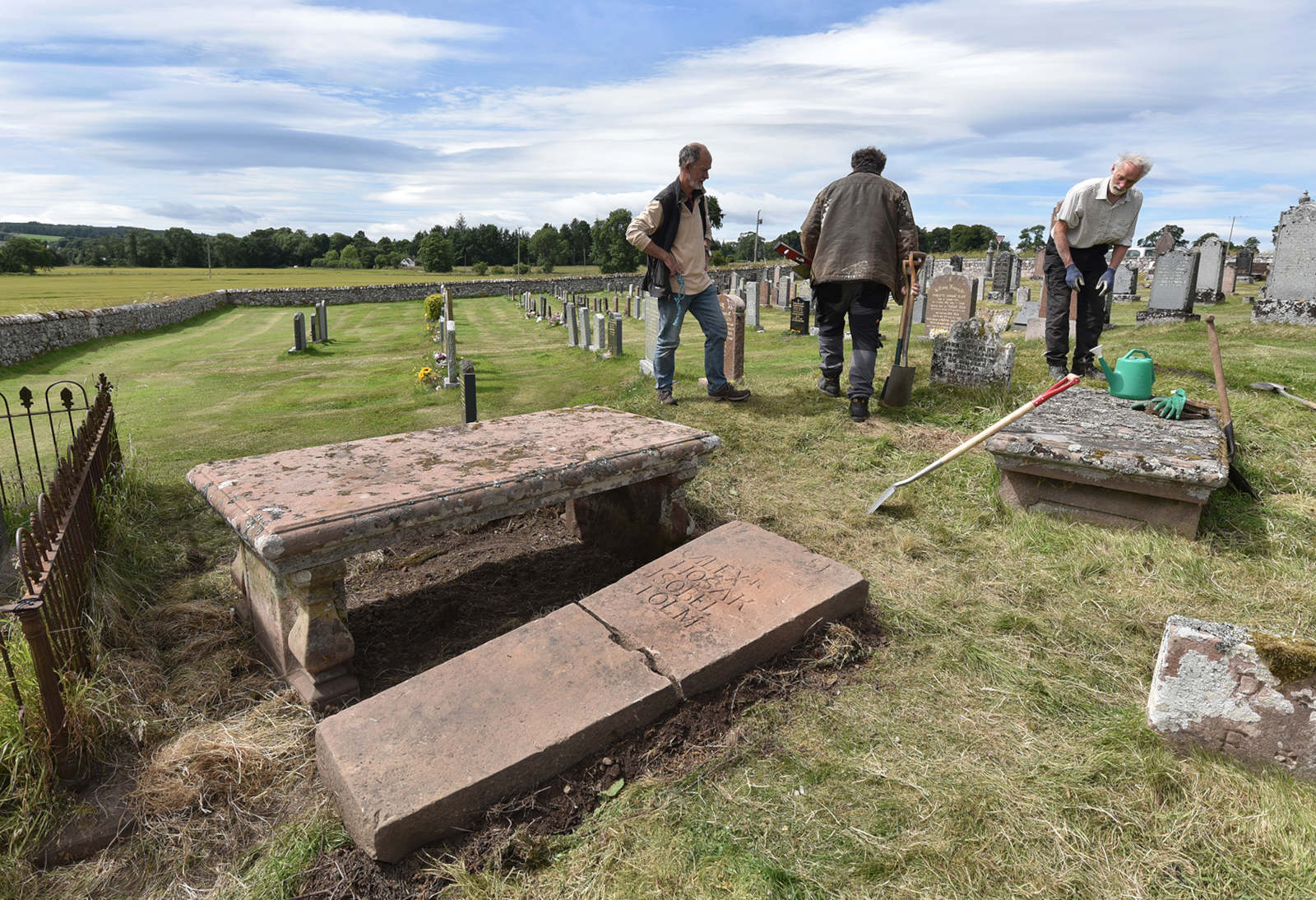 tablestone restored and the broken halves of the slab placed together; photo by Andrew Dowsett

There were quite a few Hossacks around in Kirkmichael and Cullicudden in the 1700s, and several of our oldest stones are Hossack stones. We wondered about the Tolm – did the inscriber mean Tolmie, rather rare in the parish, or Holm, one of our most common surnames? Davine, our Gaelic expert, assured us that it would be Holm, but with a Gaelic pronunciation. And so it proved. 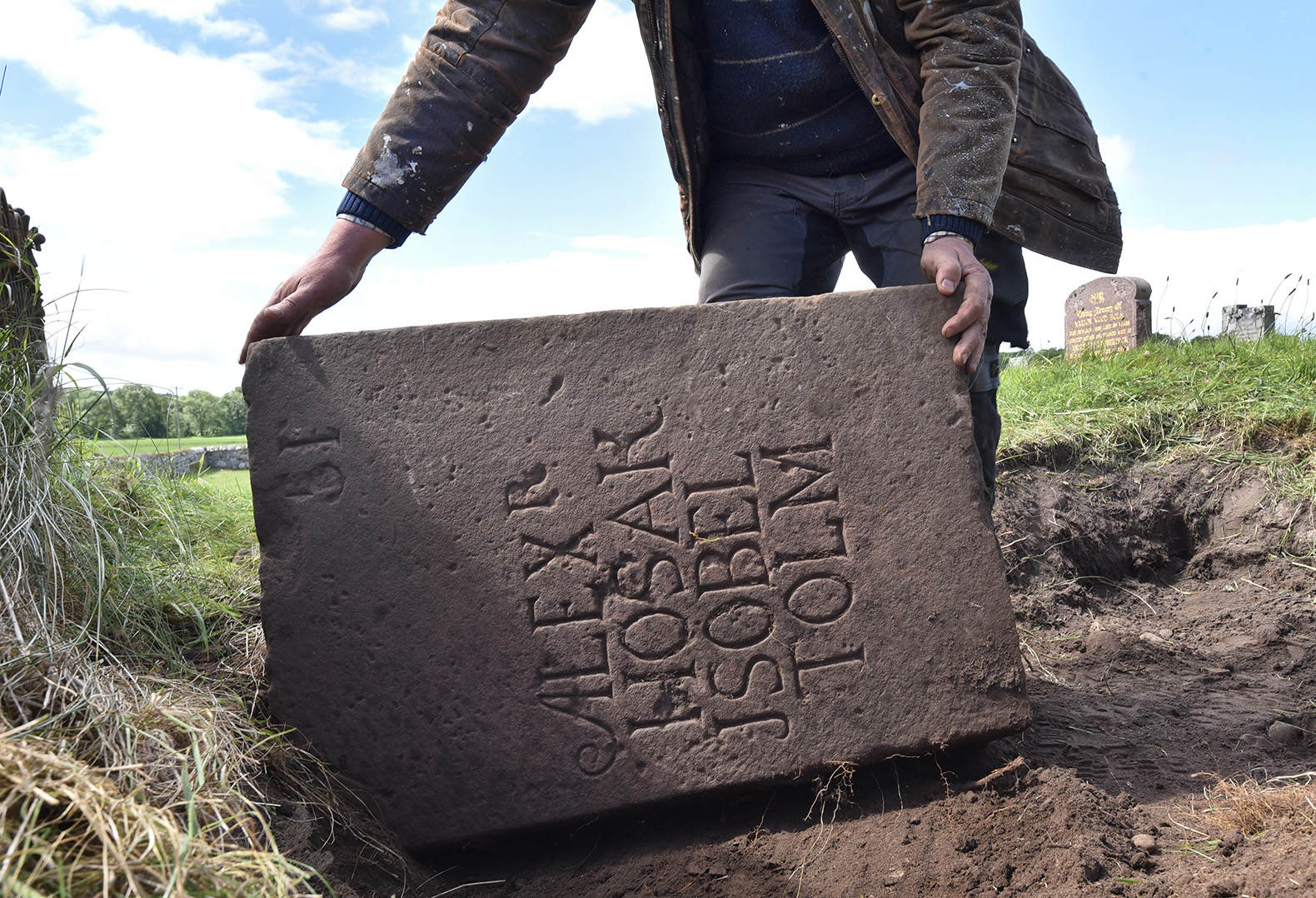 I checked the records to see if we had any further memorials to family members. The “1751” might be when one of the couple died, so that gave a rough indication of the period to look for. To my astonishment, not only did we have a further memorial, we had a further memorial commemorating this very couple!

And to complete the surprise, the second slab was in fact buried under the soil adjacent to the very tablestone we were working on. But the dates on this other stone tell a very different story. It reads: 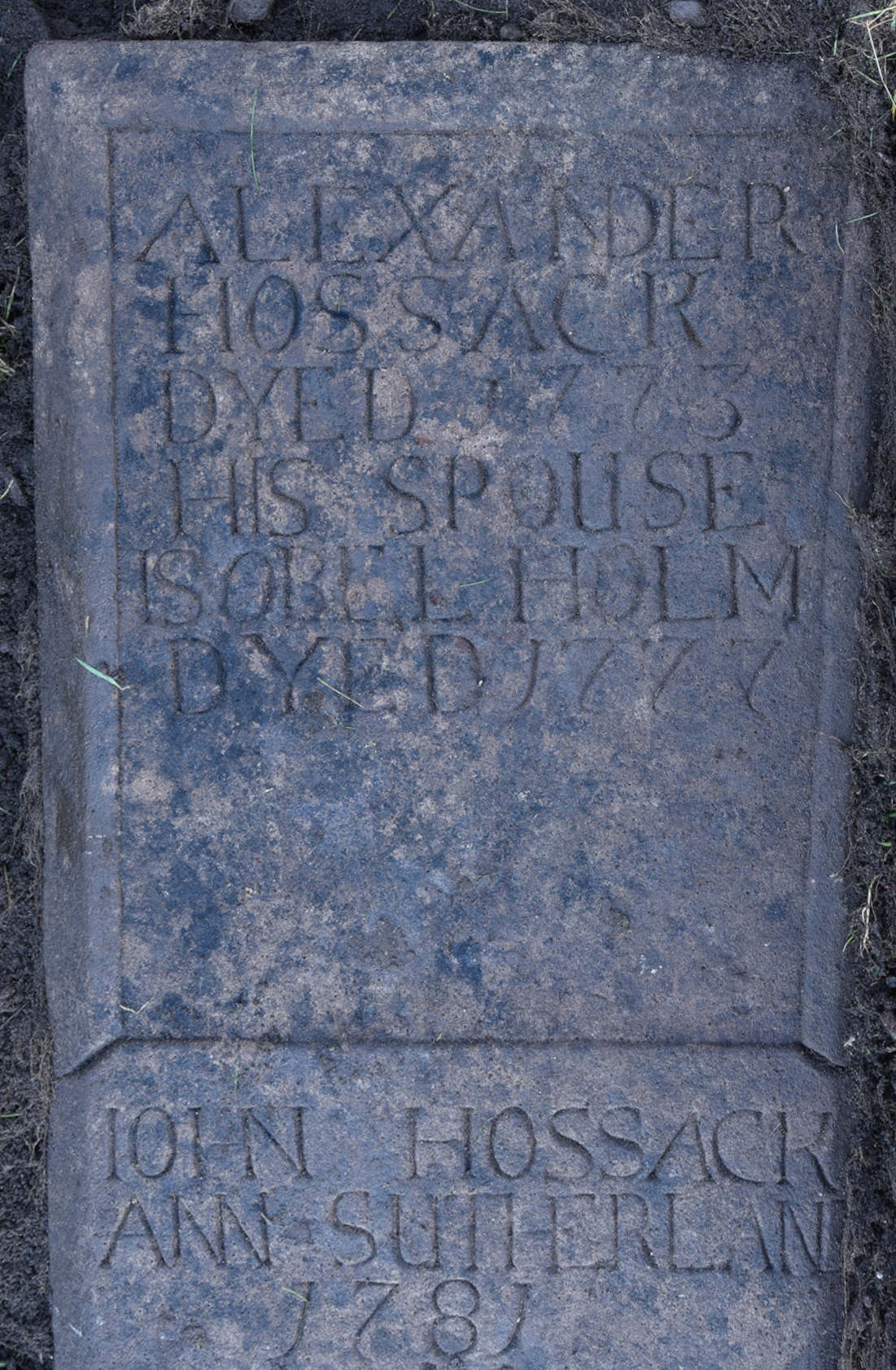 This inscription lies within an excised panel, a panel with two ingeniously designed drainage channels to prevent pondng and to avoid frost damage. The inscription confirms the spouse’s name as Holm rather than Tolm, so well done, Davine!

It is a little embarrassing to think we hadn’t recognised the same names. But to be fair, we had recorded it more than a year previously, in a cold, dark day in winter, when we had in fact already recorded some neighbouring slabs. 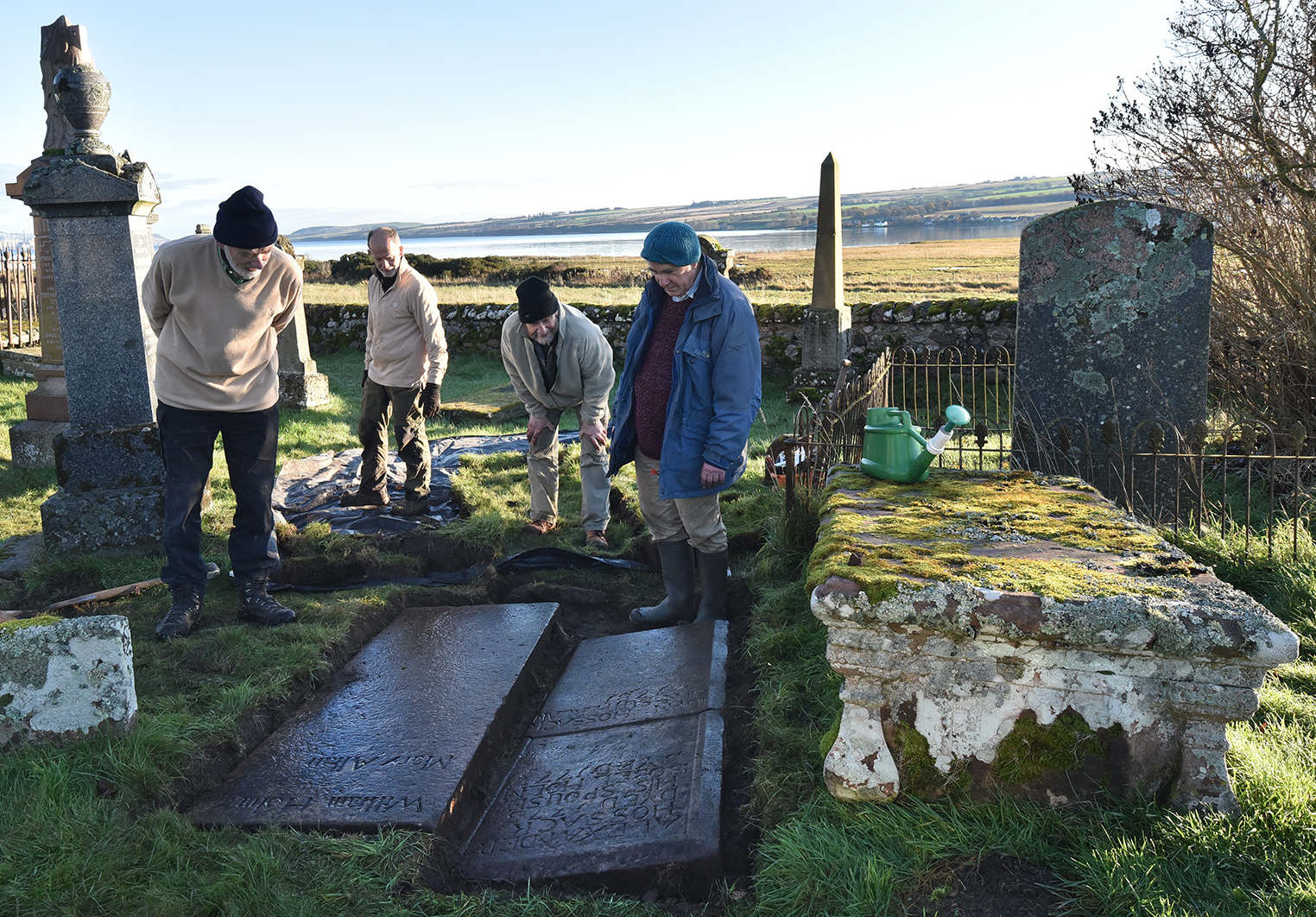 Below this panel, and probably added later, but by the same carver, is a further inscription. This commemorates perhaps the son of Alexander and Isobel, perhaps a brother of Alexander. It looks “added” and actually extends out onto the chamfer. 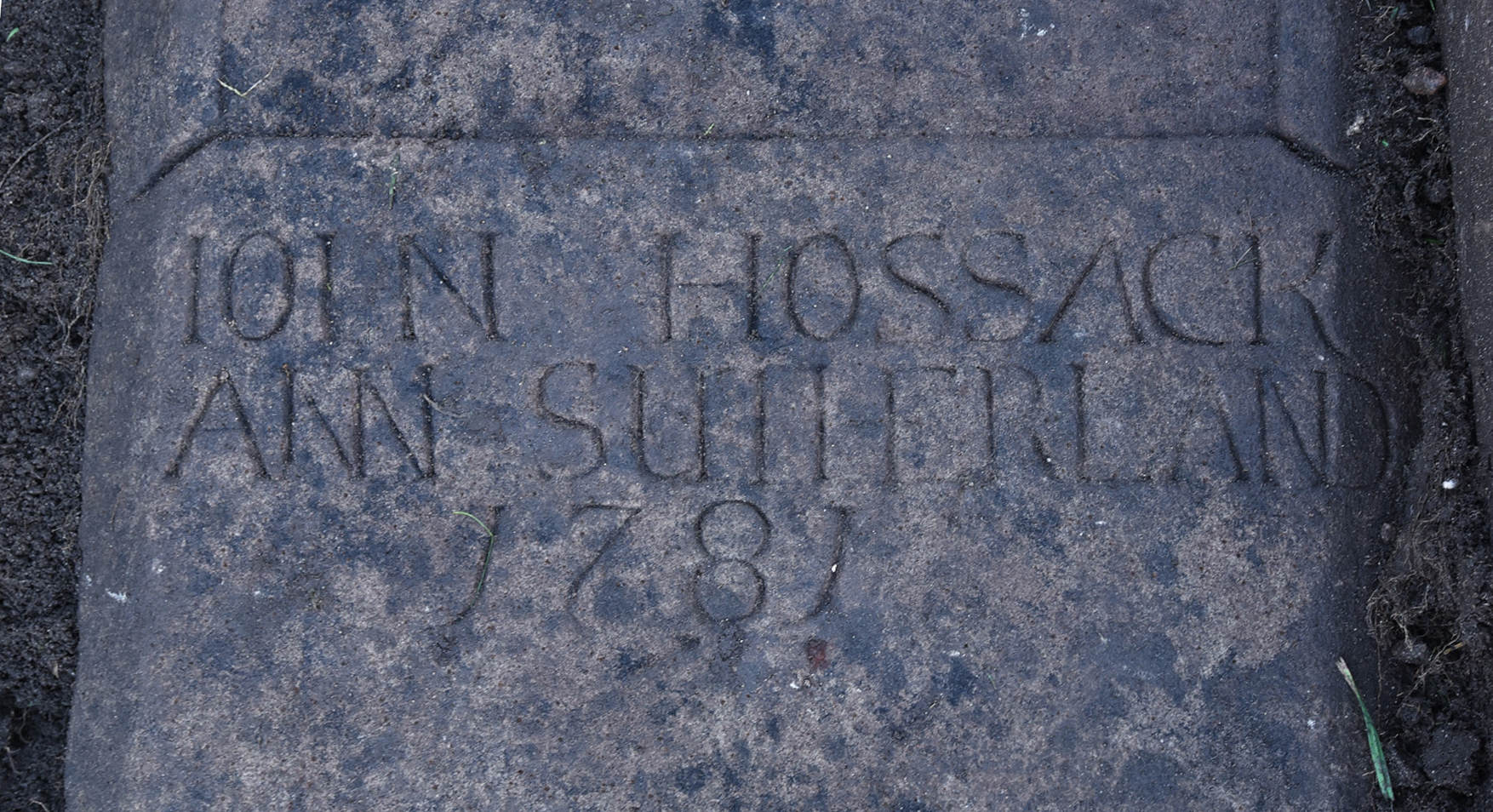 Sutherland is a rare surname to be found in Kirkmichael. We’ll return to John and Ann later.

Alexander Hossack and Isobel Holm feature in the Resolis parish records, always at the same location: Culballachie, on the Braelangwell Estate, down beside the Newhall Burn.. The family had to be in a sound financial position to afford two good quality gravestones, and Alexander is recorded as tenant or tacksman at Culballachie. 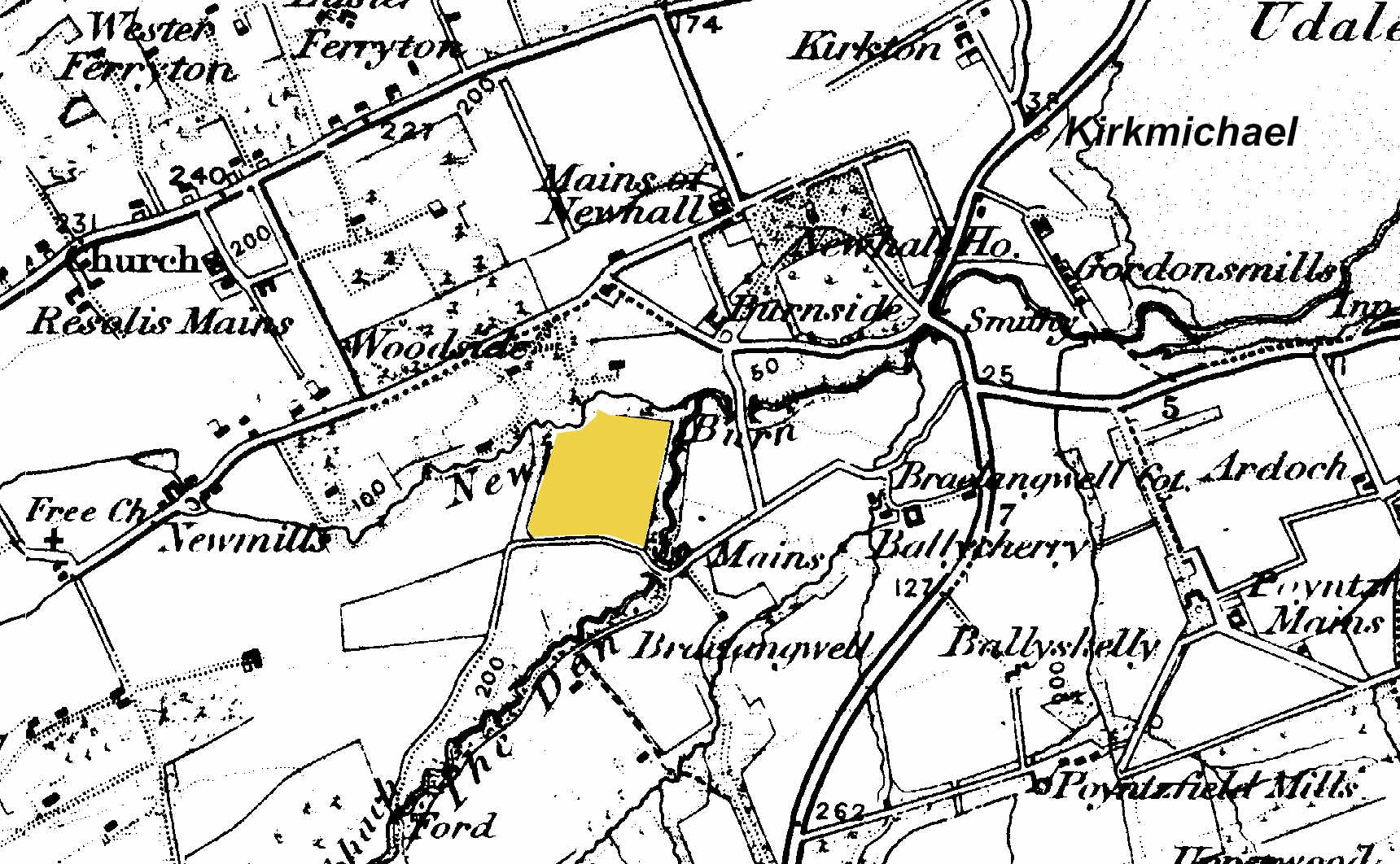 I have shaded Culballachie in yellow

We can now see that the date of 1751 on the broken slab represents neither Alexander’s nor Isobel’s death. And it does not represent a marriage date, as they already had a couple of children baptised by 1751 (John in 1748 and Lillias in 1750). And so I conclude that the year 1751 was probably the year that Alexander purchased the lair, and had his and his wife’s name placed on a slab to demonstrate their ownership. And I fear that the prompt for Alexander to do this must have been the death of either John or Lillias.

Alexander and Isobel had at least seven children, over the period 1748 to 1765, and I summarise their baptism register entries as follows.

We can estimate that Isobel was aged about 45 in 1765 when she had her last baby (a second David, the first David presumably having died). She had her first baby in 1748. We can therefore assume that she was born very approximately in 1725, and had her first child when she was aged again very approximately 23 in Culballachie. From his own words, below, we know that Alexander came into Culballachie about 1745, so it is tempting to think that Alexander and Isobel came into Culballachie when they married.

The first names of the children are all relatively common except for Lillias and Henderat (Henrietta) and those two give some scope for looking at later generations. A tacksman or tenant in Kinbeachie, and later in Toberchurn, James Simpson, and his wife, Henny, Henrietta or Hendret Hossack, had seven children baptised between 1774 and 1792 and it is likely that this is the “Henderat” baptised in 1753. However, I won’t pursue this until more evidence becomes available. It would be nice if it were, as their son, Isaac Simpson, was for many years the tenant in Auchmartin, where my mother was born and grew up!

I have little on Alexander Hossack and Isobel Holm. Alexander was called to give evidence to the Commissioners of Supply in 1765 as part of the great election battle going on for the seat of Cromarty-shire. The two antagonists were Lord Pulteney, the richest man in Britain, and Sir John Gordon of Invergordon, Baronet, one of the tetchiest men in Britain. From our perspective, it usefully provides an indication of Alexander’s birth date as well as details about his life, including the fact that he could not write:

Where was he located prior to 1745? We do not yet know. It may, for all we know, have been in Easter Ross, an area I mention for a reason that will become apparent.

Does the second inscription on the lower slab (IOHN HOSSACK / ANN SUTHERLAND / 1781), commemorate John, the son of Alexander and Isobel born in 1748, or perhaps a brother of Alexander? I raise the brother issue as the only reference to a John Hossack and Ann Sutherland which I can find in the marriage or baptism records of Scotland in this period is from the Parish of Nigg, back in 1736:

Fearn and Nigg are both across in Easter Ross, and Easter Ross and Kirkmichael are just a short ferry crossing away from each other, so it is quite feasible that we have here the same family of Hossacks. But until more information is found, we cannot pursue either line.

Resolving the position of the stone

What should we do with the broken slab long term? There is no free space in this area of Kirkmichael in which to place the slab. There is the blank tablestone to the west, another buried slab to the east, an enclosure to the south and more memorials to the north. There was no alternative but to place it above the deeply buried second slab. It is, in fact, rather appropriate that the two slabs commemorating the same couple are now together.

This at the moment is one of our shortest tales in this series of Story Behind the Stone, but it will be expanded if further information comes available. Watch this space! 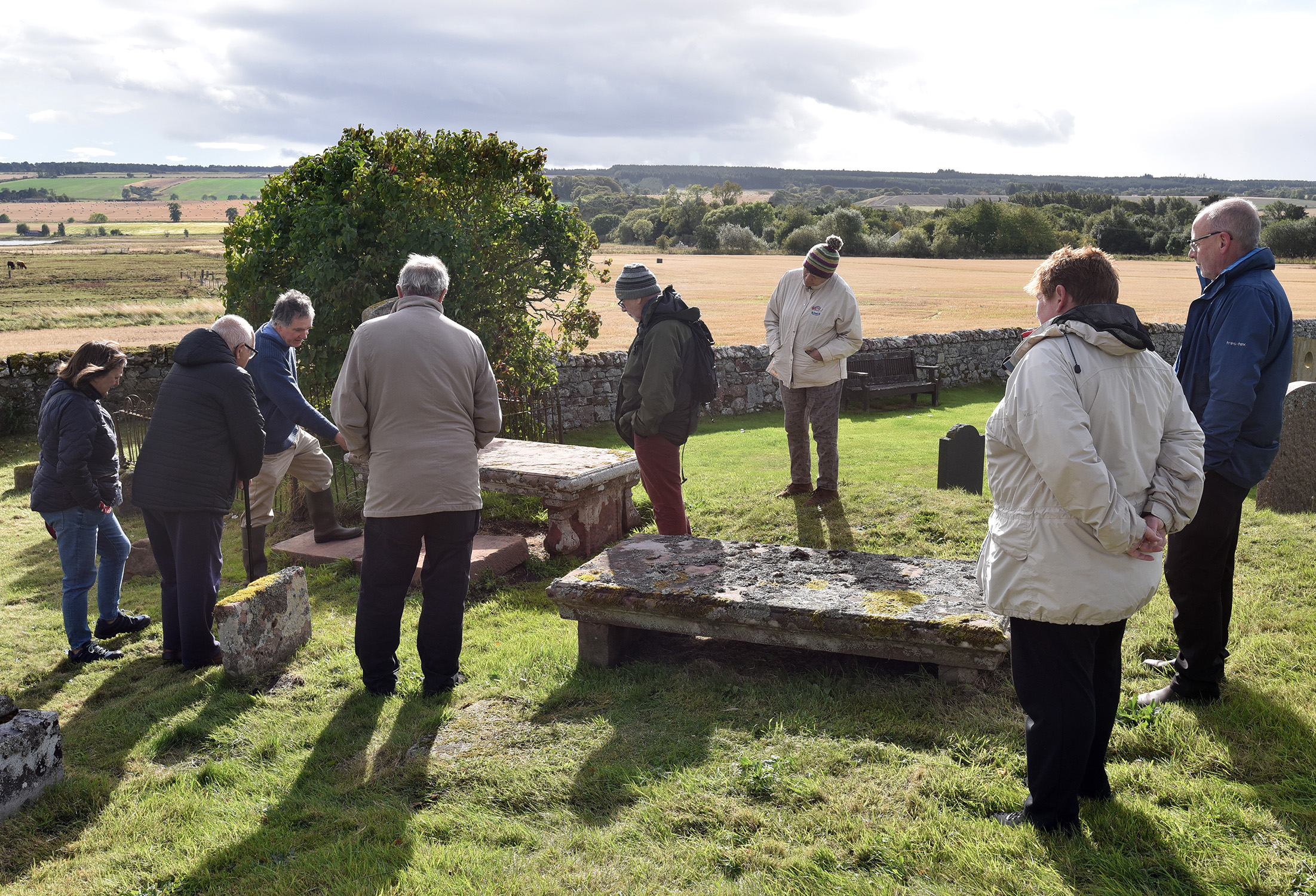