text by Dr Jim Mackay; photogrammetry by Andy Hickie; photography as given below each image

A summary of this story forms a case study in the ScARF “Future Thinking on Carved Stones in Scotland”.

No-one could read this memorial stone. It probably hadn’t been read for hundreds of years. And then, in 2018… 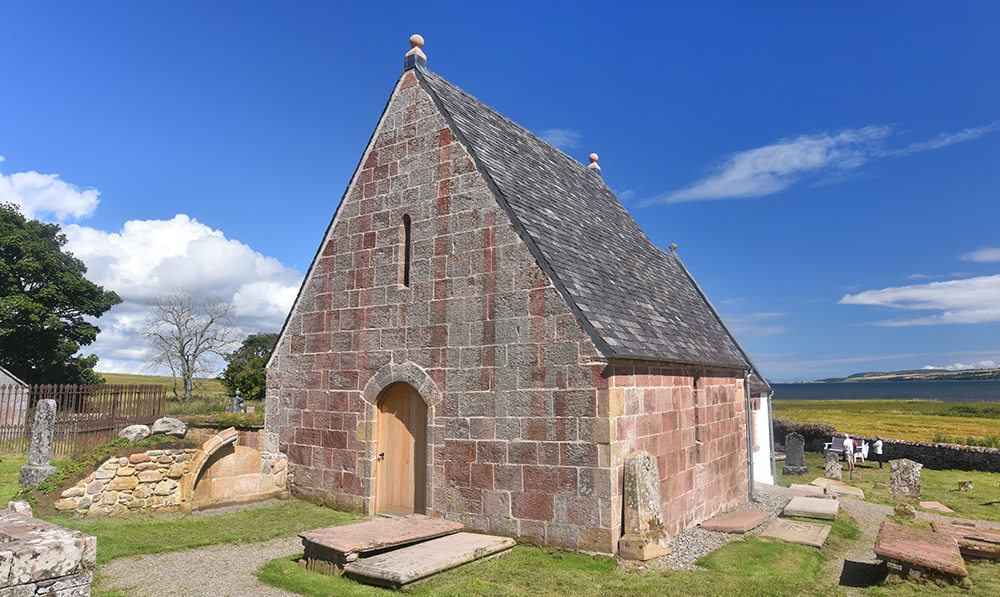 The arched tomb recess, attached to the north-west corner of the restored Kirkmichael; photograph Andrew Dowsett 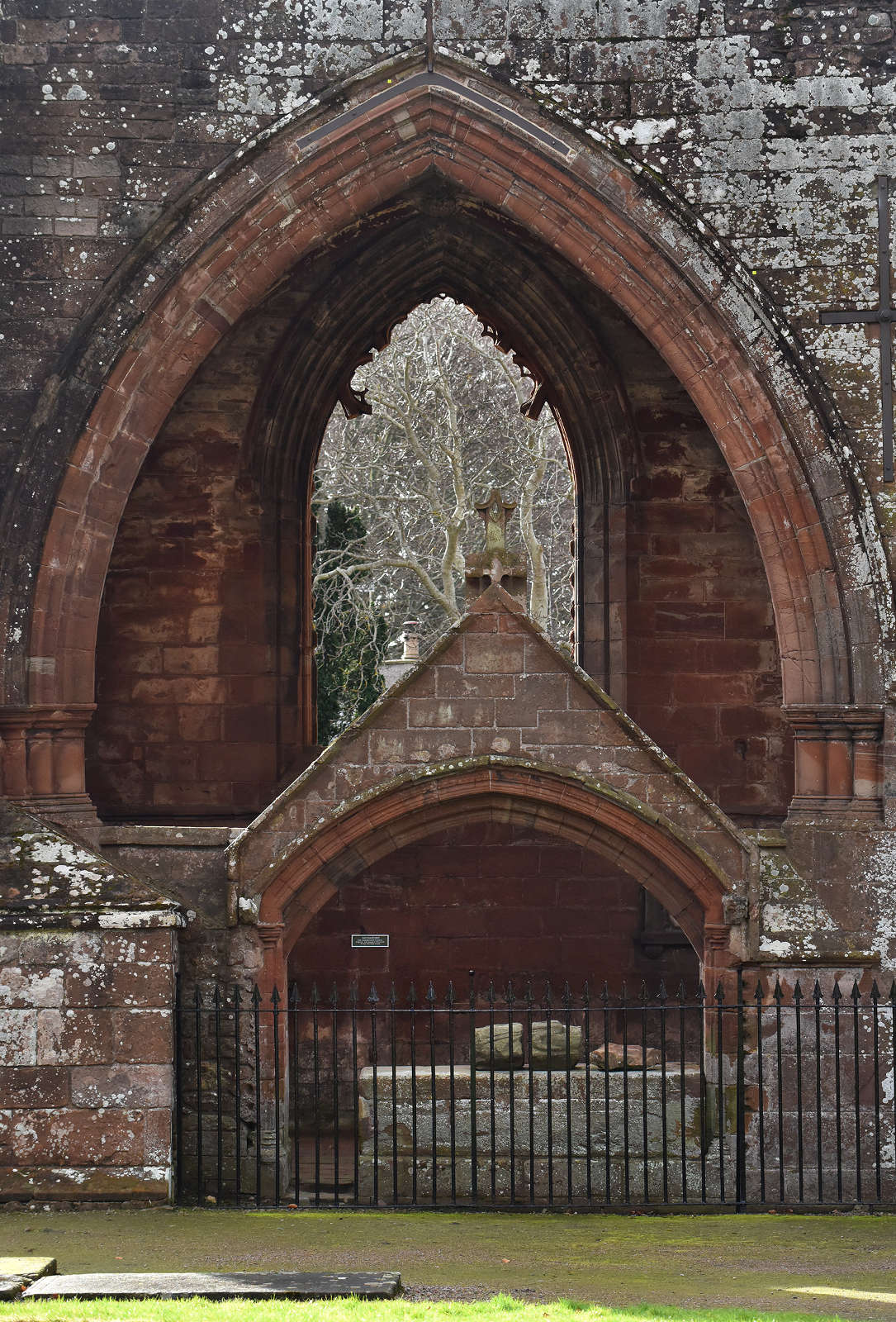 The Arch with its Inscribed Panel; photograph Jim Mackay

Across in Fortrose Cathedral there is still a stone effigy sitting on the ledge of one of the arched tomb recesses there. There is a ledge at the base of the one at Kirkmichael, buried below a few inches of soil, which could easily accommodate a small effigy. Like everywhere in Kirkmichael, the soil level has risen, obscuring lower features.

Within the arched tomb is a soft sandstone panel bearing an inscription. It is heavily eroded, so that the igneous stone intrusions which would once have been below the surface of the sandstone now stick out. However, the words always seemed to us to be on the verge of readability.

A large dog rose had grown up through the arched tomb and we had restrained from cutting it. We’d be more ruthless now. The rose eventually pushed the panel out and during the restoration we had to refer to old photographs when putting the arched tomb back together again. Whilst the panel was out, photographer Andrew Dowsett and I one evening used angled light to take pictures of the inscription. We could pick out some letters, and we thought we could see an “AND” but nothing emerged with any certainty. 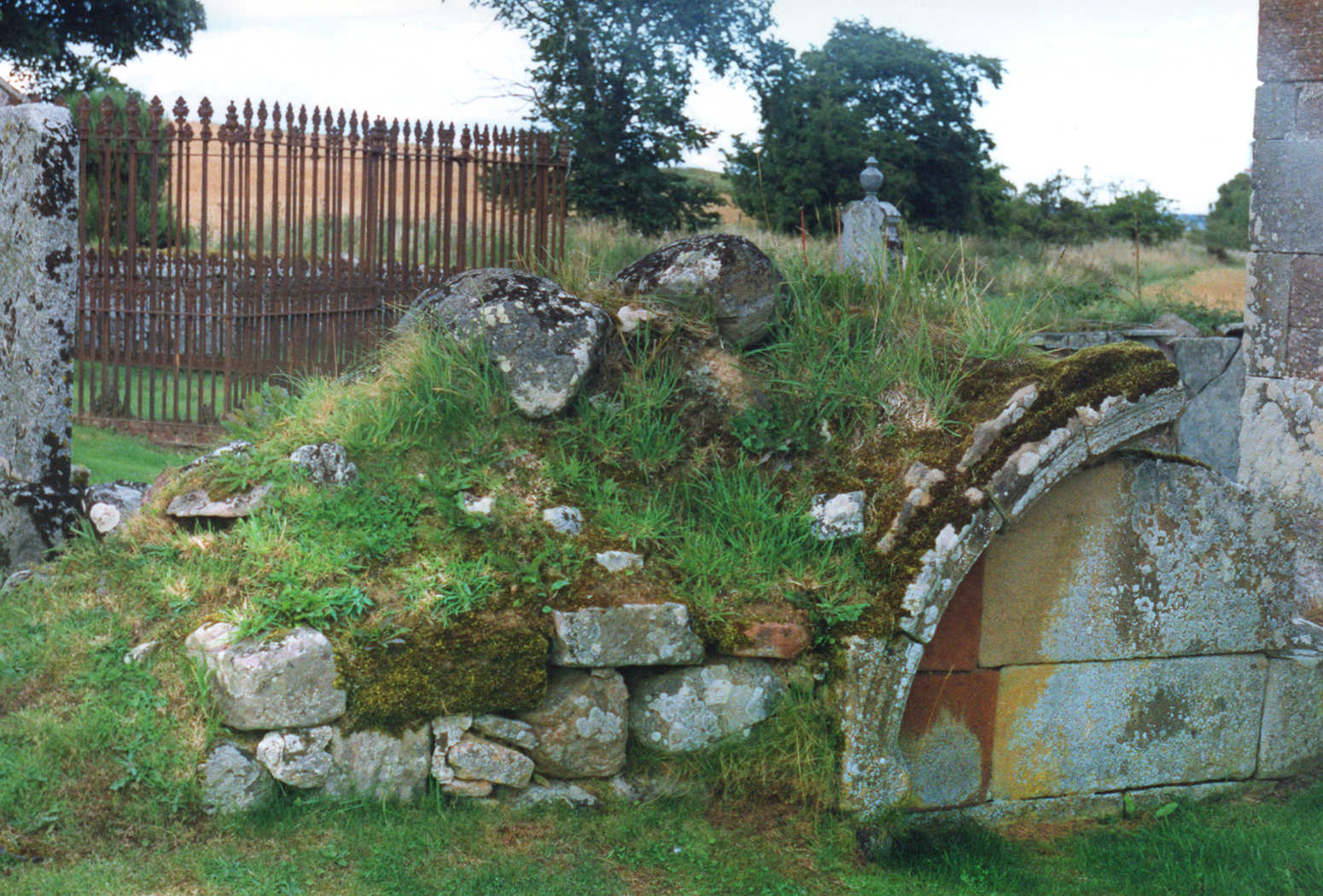 The arched tomb in the 1980s; photograph Andrew Dowsett 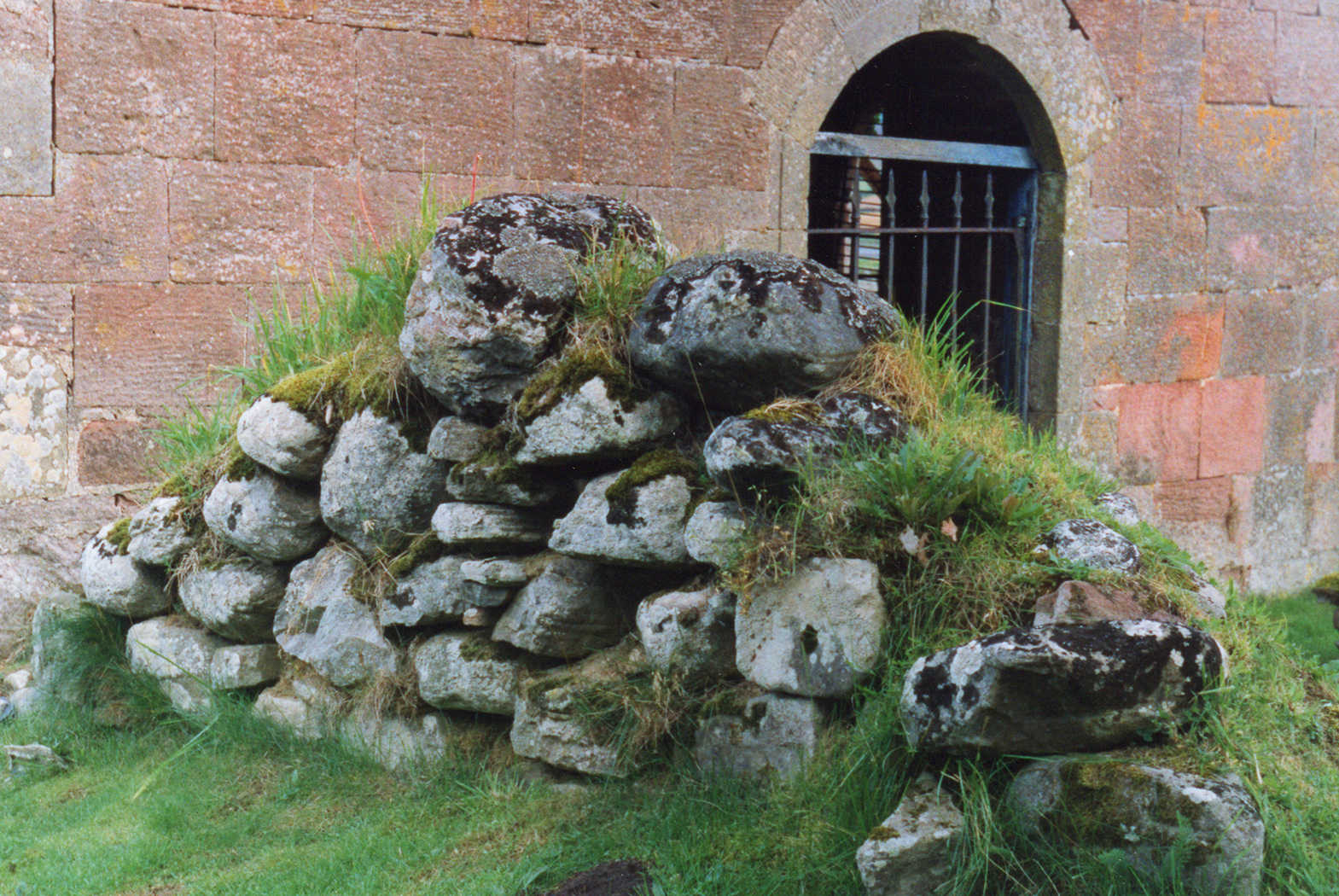 The reverse of the arched tomb in the 1980s; photograph Andrew Dowsett 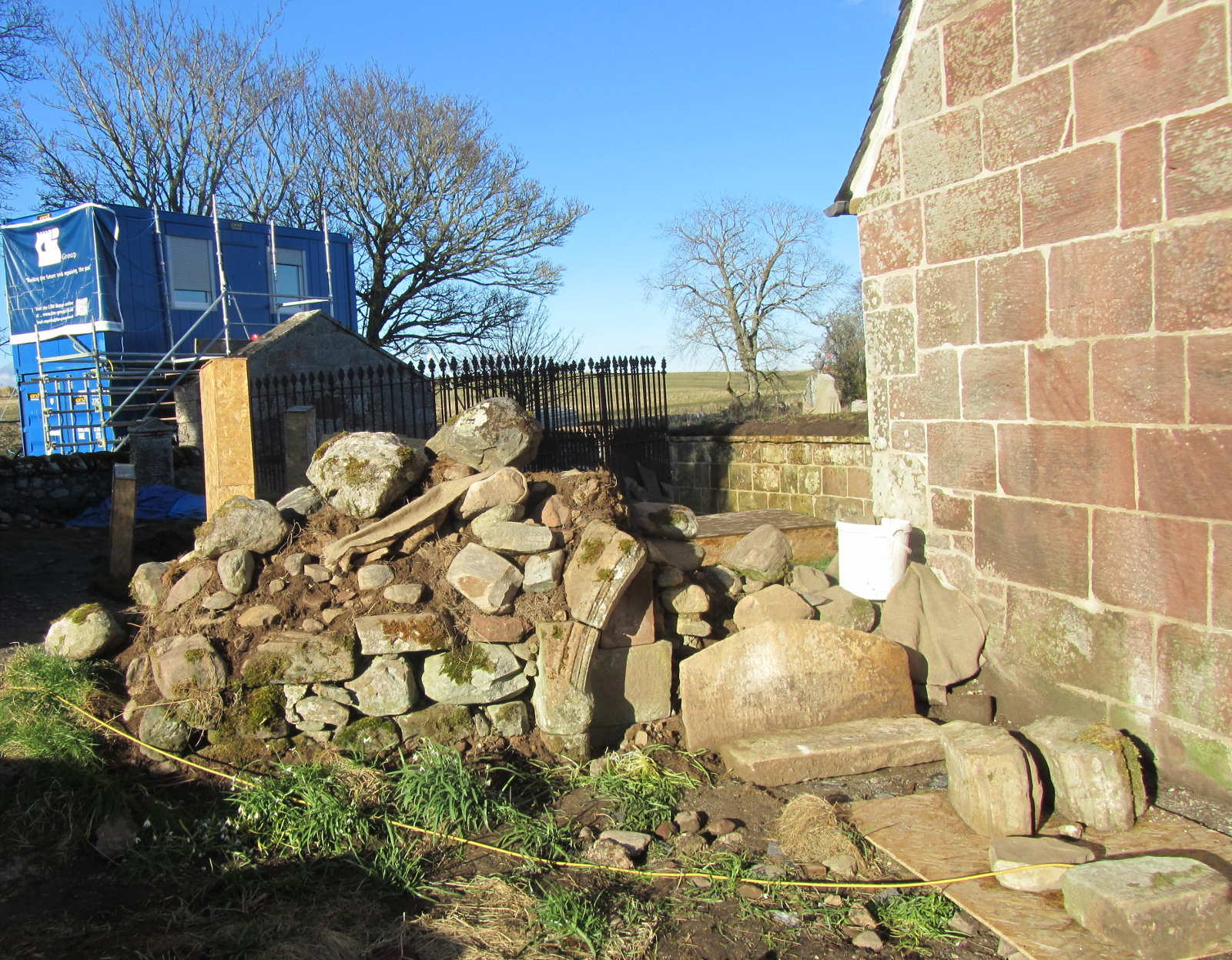 The parlous state of the arched tomb in 2017, before restoration; photograph Jim Mackay

In March 2018, during our regular Saturday morning work party at Kirkmichael, Andy Hickie dropped in to take some images of the medieval stones within the nave. Andy had been experimenting with a novel photogrammetric technique which has received recognition from the Corpus of Anglo Saxon Stone Sculpture. He realised that Red Relief Imaging, originally developed by Asia Air Survey Ltd for displaying LIDAR data, could also be used for analysing point cloud data derived from standard photogrammetry, and has adapted the technique for use on stone carvings. Andy uses his skills to produce beautiful images of old stones which bring out the detail of the carving magnificently. While he was at Kirkmichael, I asked him if he could have a go at the panel in our arched tomb recess.

Right from the outset the results were spectacular. Suddenly we had a dozen or so words where we had none before. We now knew the inscription was in English, we knew that it was a memorial celebrating the memorialist’s father and mother, but unfortunately the stone was simply too eroded to give up more information at that point. Andy tried further photography and kept adjusting the controls and we picked up a few more words. Even those parts of the panel which were worn almost smooth were beginning to yield up their story. 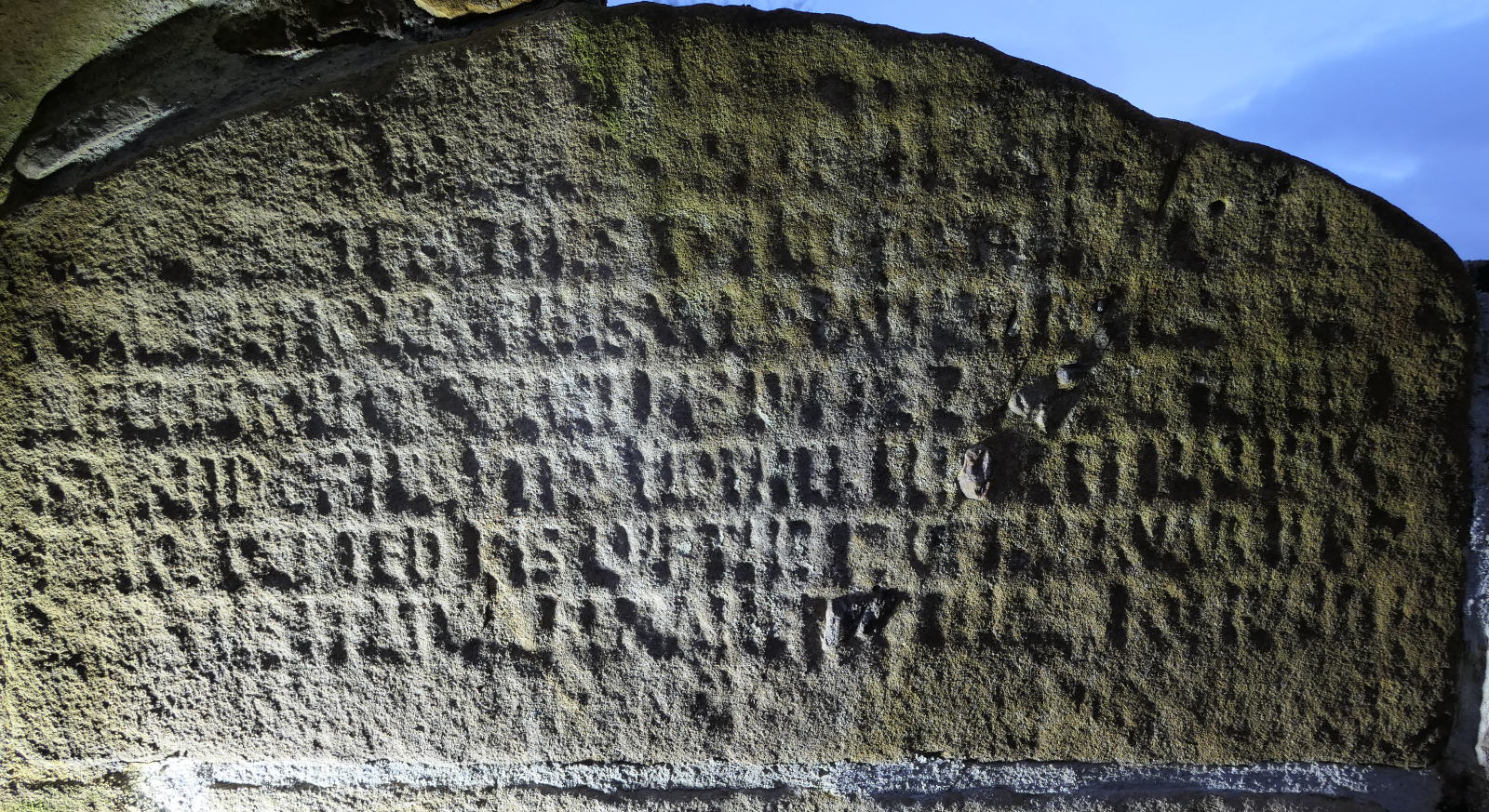 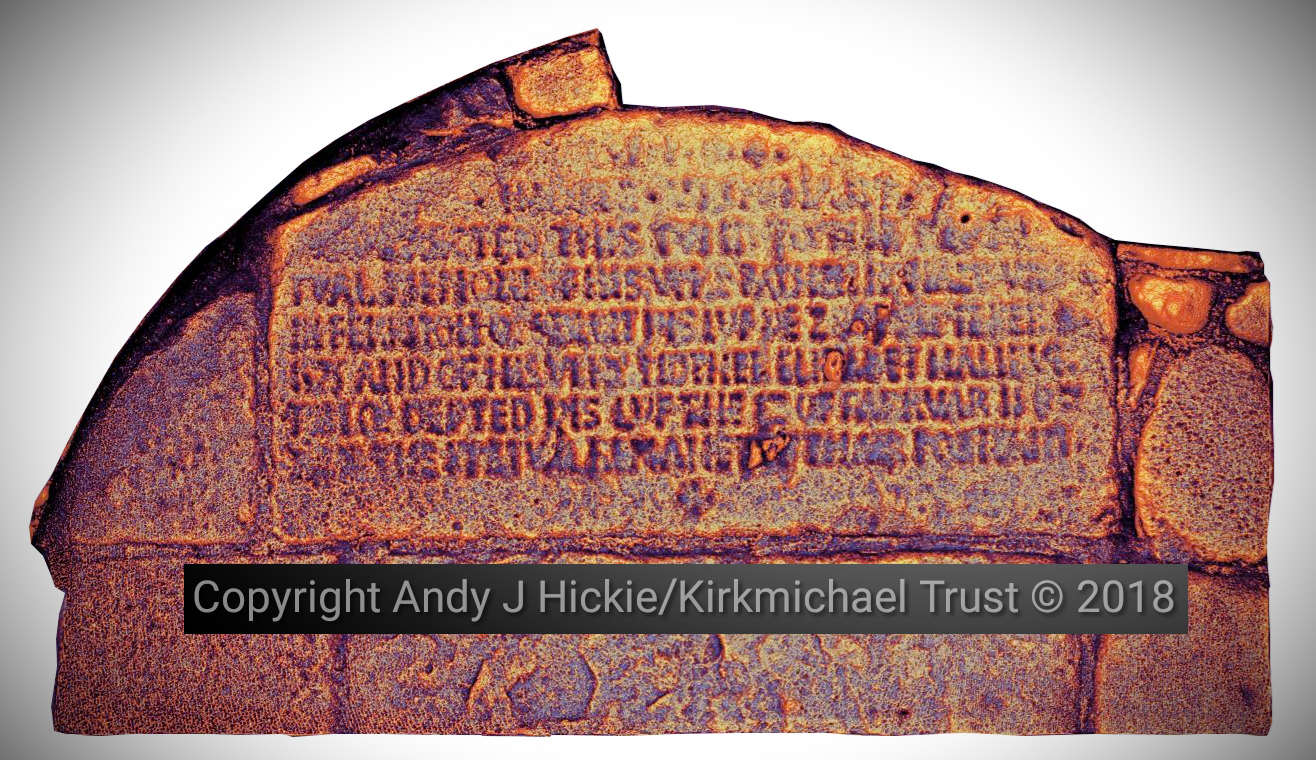 We now know that it is an Urquhart stone. The memorialist, an Urquhart obviously of some prominence locally, wished this memorial to be erected to the memory of his father, an Urquhart of Ferriton, who had died in 1575, and of his mother, Elizabet Haliburton. The first names of father and son were initially beyond us, but after some more adjustment by Andy they too were recovered. The process of recovery of the inscription was close to miraculous.

The panel gives up its secrets; image Andy Hickie 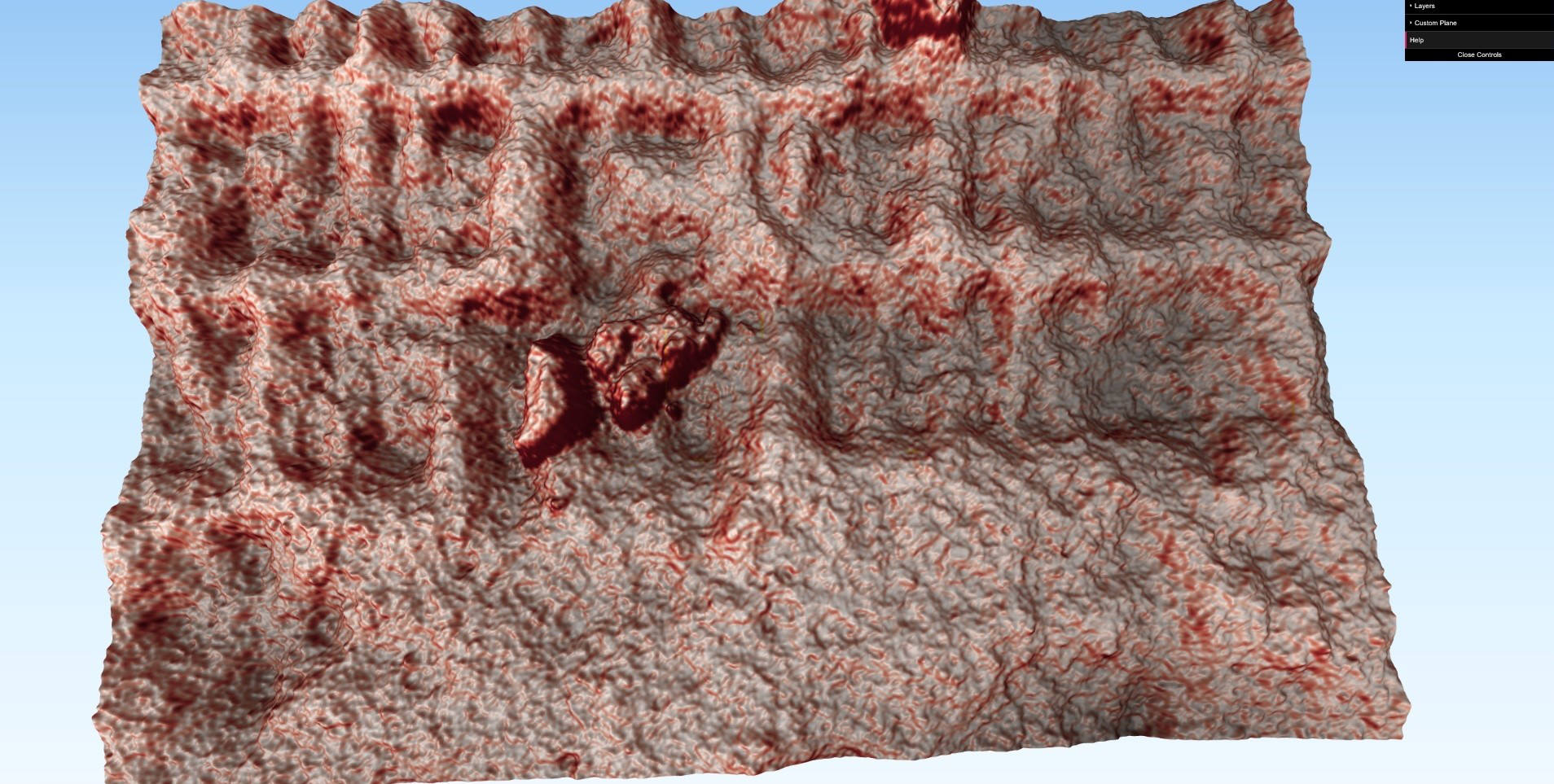 This is the inscription as it stands. Note that “V” was always used at this time for “U”. “VMQ” is an abbreviation of “umquhile” (“late”). “Q” is an abbreviation of “quha” (“who”). The letter “y” is used sometimes for “th”, as in “ye” (“the”) and “yis” (“this”). Characters which have not been absolutely positively identified are in light text, the definite characters in heavy text, and characters where we are really doubtful we’ve left as asterisks.

The name “Elizabet Haliburton” is not one that we could have predicted, and means that, if we can pick her up from some old document, the family can be placed in a wider context. I see that Agnes, one of the daughters of Alexander Urquhart, Sheriff of Cromarty, married a gentleman called Haliburton a generation earlier and there is therefore a strong likelihood that Elizabet would have been a relative.

The name of Urquhart of Ferriton is well documented.

In 1611, a charter is confirmed involving Alexandro Wrquhart (Alexander Urquhart) in Ballicherrie, and Jo. Wrquhart in Ferritoun and M. Tho. Wrquhart ministro (the minister Mr Thomas Urquhart) and several other locals.

In 1618, there are “Letters of Renunciation and Grant of Redemption by John Urquhart in Ferritoun one of the Executors of the said Arthur Dingwall in favor of the said Sir Thomas Urquhart of Cromartie Knight upon the narrative of the payment of 1200 merks to the said Helen Ross and her foresaids of the said two Wester Oxgangs of the Lands of Rissollis. Dated the said 23rd May and Recorded in the said Register at the Chanonry of Ross the said 9th June 1618.”

Arthur Dingwall and the apparently much-married Helen Ross crop up in a sasine (RS36/2; 64) of the early 1600s: “Helen Ross, sister of James Ross, relict of Arthur Dingwall in Resolis and of John Clunes, burgess of Cromarty, and spouse of Thomas Ros in Resolis”. Why John Urquhart of Ferritoun should have been acting as executor for the deceased Arthur Dingwall in Resolis I do not know, but it is no surprise at all to see him selling lands of Resolis to Urquhart of Cromarty. Note that at this time, the Resolis referred to was an area of farmland within the parish of Kirkmichael. The modern parish of Resolis, named after that location of the new church, came about several hundred years later. 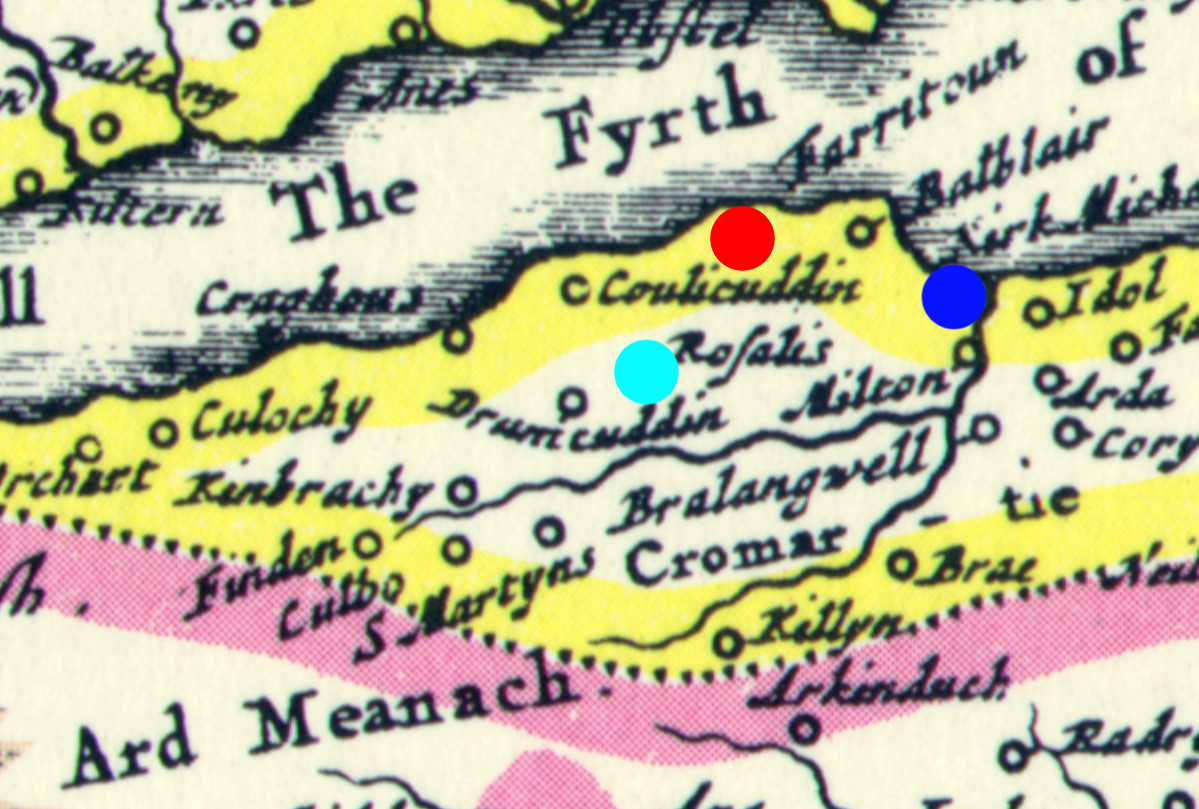 In 1623, there is a reference once more to “Thome Urquhart de Cromartie militia”, with one of the witnesses Jo. Urquhart de Ferritoun.

John Urquhart of Ferriton is thus well established historically, and tied in closely with the Urquharts of Cromarty. However, I have never come across a reference to his parents, so the names of Ronald Urquhart and Elizabet Haliburton is brand new information.

Again, we were not expecting to see the name Ronald as in that period it was not a commonly used Urquhart Christian name. But I do note one reference in the area in this period to a Ronald Urquhart.

Just after the Scottish Reformation, the buildings in Fortrose around the Cathedral, previously held by officers of the church bureaucracy, but paid for by the tithes of Black Isle parishes like Kirkmichael and Cullicudden, went through various ownership changes. There are several documents in the period 1573-1574 relating to the sale of the “Manse of the Subchantor of Ross” involving the Urquharts, one of the powerful families in the Black Isle, or Ardmeanach as it was then known, at the time.

This is where it gets interesting. There is a Charter of Sale (RH6/2302) by Rannald Urquhart, feuar of the manse of the subchanter of Ross with croft and toft thereof, with consent of Adamson, subchanter of Ross, his superior, and in implement of contract dated 6 Jan 1573/1574, granting to Walter Urquhart, Sheriff of Cromarty, and Elizabet McKenze, his spouse, and the survivor of them in liferent, and to Henry Urquhart, their second son in fee, and his heirs male, whom failing, said Walter's heirs whomsoever, the subchanter's manse of Ross, with houses and yards thereupon, lying within the Chanonry of Ross and sheriffdom of Invernes (betwixt the chanter’s manse on the west, the road called the Watter-get on the east, the common street on the south, and the hill called Platcok-hill on the north).

Photogrammetry is not at present something that can be automated. Andy had to work hard on some sections, darkening bits, lightening other areas, carrying out innumerable adjustments to get the clearest images of different sections of the stone. Some words were so difficult that we were reduced to measuring length of individual letters to consider what would fit in that space. The remarkably even and high quality of the carving on this stone helped.

Nevertheless, you cannot achieve the impossible with photogrammetry. Some words on the panel are still undeciphered due to the degree of erosion to the sandstone. This is not helped by the atypical nature of the inscription – admittedly, there are few gravestone texts of this era to compare with, but the inscription here does not follow the usual word pattern. We would welcome suggestions!

And finally, the hours spent poring over images could not realistically be devoted to many stones. However, for the occasional special stone, it is a remarkably effective exercise in reading the unreadable.

This panel is now known to hold one of the oldest inscriptions bearing a date in the Black Isle. We need to consider what further protection measures for this carving would be non-intrusive and appropriate. We also need to consider which other stones could benefit from this photogrammetric technique. We have already made progress with another Urquhart wall panel in the chancel, and strange shapes carved on a slab in the kirkyard! 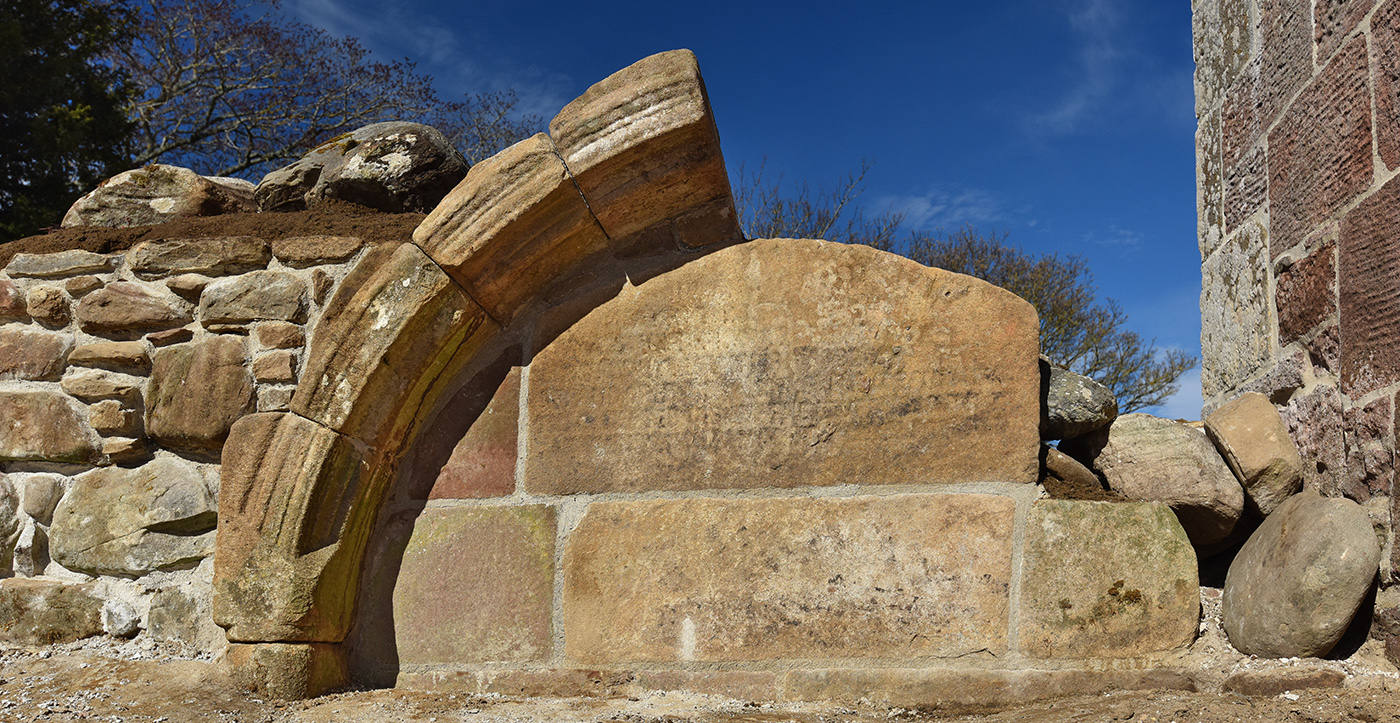