A Dynasty of Shoemakers: the family of Alexander Urquhart and Helen Murray of Ferintosh, Jemimaville and Alness

The dumpy white memorial with its scroll face always looks a little odd amongst the granite headstones and sandstone tablestones of Kirkmichael. Its inscription simply says:

Why was Marion, the wife of an Alness bootmaker, buried in Kirkmichael? It didn’t make sense. Her death certificate didn’t help:

Further research showed that both Marion and her husband Hugh had been born in the parish of Urquhart, and had no obvious connection with Resolis. Hugh’s parents were buried in Old Urquhart cemetery as you’d expect, and Hugh himself gets a mention on their stone there.

I had a bit more difficulty locating where the parents of the deceased Marion were buried. They weren’t in Old Urquhart for sure. I checked their death certificates and clearly they must have moved to Resolis as they had both died there about the same time in 1892! They weren’t buried in Kirkmichael were they? Feeling very foolish I had a look at my own records – and there they were. Their memorial in fact was a foot away from the white scroll stone commemorating their daughter Marion! How embarrassing. 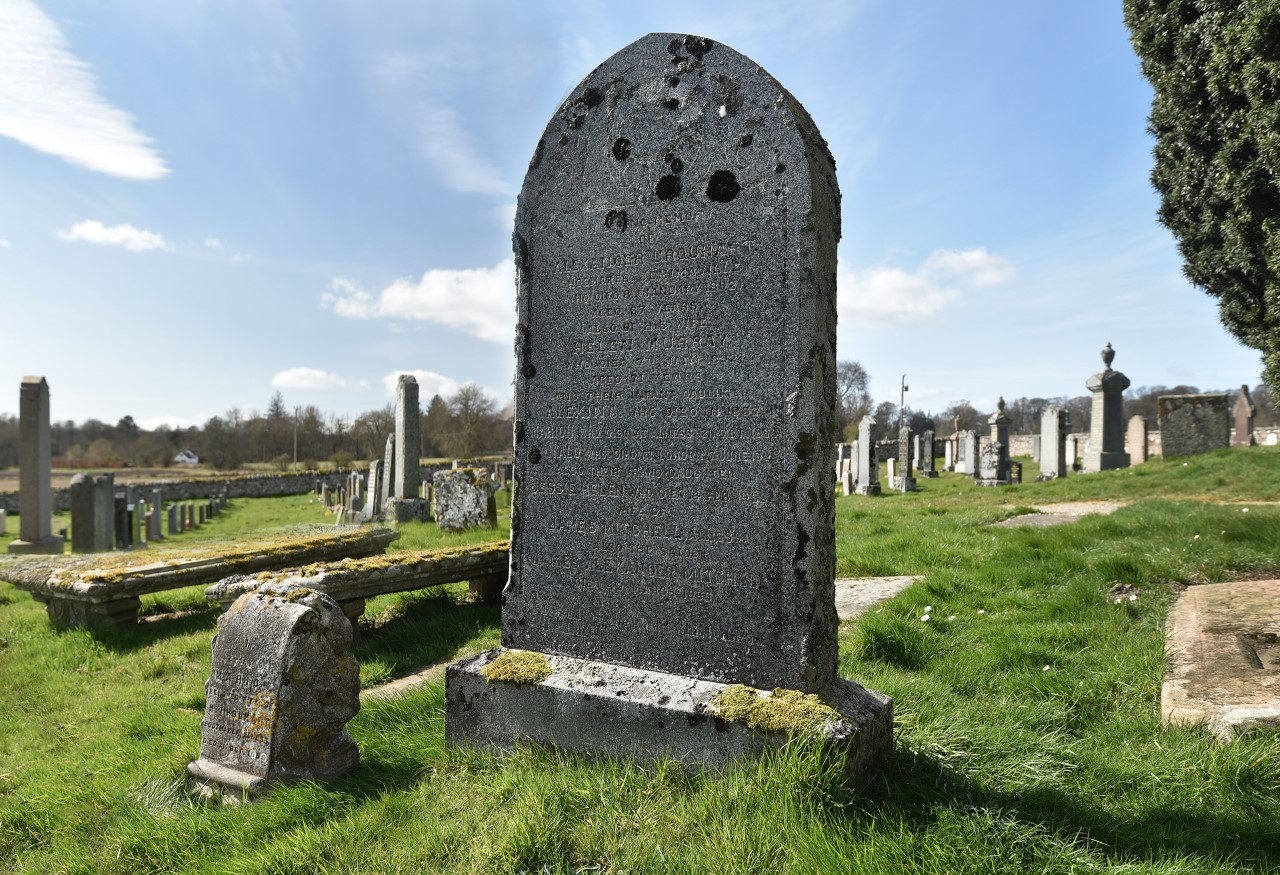 A Dynasty of Shoemakers

Hugh naturally had become a shoemaker himself and had moved to Jemimaville. Marion’s family had moved to Jemimaville many years earlier (I calculate in 1858 or 1859), so they must have been in competition. Marion’s father was well-known for the quality of his work and Hugh too must have been skilled as he survived in his trade for the rest of his life.

Marion and Hugh had only one child, born at Jemimaville in 1888:

There were to be no more children. Sometime before 1891 the family relocated to Alness, leaving Marion’s elderly parents in Jemimaville. I do not know for sure why they moved to Alness, but presumably they felt there were greater opportunities for a skilled shoemaker there. The family were to be shoemakers in Alness for another fifty years.

Not long after Hugh, Marion and Jessie Helen moved to Alness, back in Jemimaville, in an outbreak of clearly a serious virus infection, both Marion’s parents died close together in time. The Ross-shire Journal of 22nd January 1892 reported:

Resolis – Sudden Death of Mr and Mrs Urquhart, Jamimaville.– Wide-spread sorrow has been caused by the deaths of Mr A. Urquhart, shoemaker – who fell a victim to inflammation of the lungs, following influenza, on Friday of last week – and of his wife, who fell a victim to the same malady the day previously. Both may be said to have reached the allotted span of threescore and ten years, and fell victims to the disease after a very short illness. The sad event has cast a gloom over the whole district, in which both were highly respected and esteemed, showing in their lives an example of true Christian piety. Mr Urquhart was a retired and very unassuming man, a man of peace, a kind friend, and a dutiful parent, while Mrs Urquhart, who was a faithful, loving, affectionate helpmate, and a devoted mother, also extended her genial kindness to many in the district. Few sick beds but Mrs Urquhart was found there, giving her assistance in comforting the sick, and consoling the dying, and the bereaved. Both Mr and Mrs Urqhart were natives of Ferintosh, and came to this parish over 30 years ago, taking up their abode in the village of Jamimaville, where Mr Urquhart carried on a successful business as boot and shoemaker, and by his superior qualities as a tradesman, and a true friend, he gained a large connection. Both were members of the Free Church, and very attached supporters, it being a rare occasion on which their places in the church were without them on Sunday. Mr Urquhart was collector for the Sustentation Fund, for the east end of the parish, for a number of years, and was always found ready to give his services in connection with the meetings held in the old Free Church, Jamimaville, where his familiar face will be greatly missed. The remains of Mrs Urquhart were interred in Kirkmichael burying-ground, on Saturday, and of Mr Urquhart on Tuesday last. Although the weather was exceedingly stormy a large number of people turned out on both days to pay a last tribute of respect to the remains of the deceased. Mr and Mrs Urquhart leave a grown up family of one son and three daughters to mourn their loss, and for them much sympathy is felt in their sudden bereavement. 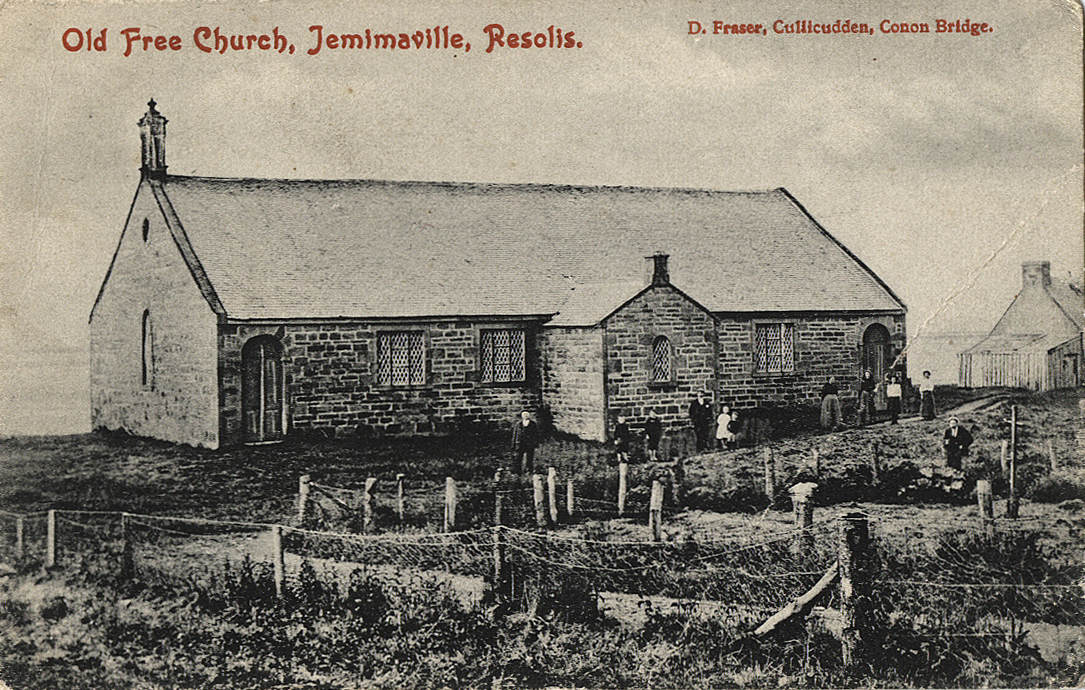 The old Free Church in Jemimaville with which Alexander Urquhart was particularly associated; photo by Donald Fraser, Cullicudden

Their death certificates confirm they had succumbed to influenza, with the informant being son-in-law Hugh, who gave his address as Alness.

The obituary refers to a grown up family of one son and three daughters. One daughter, Alexanderina, had died in 1867 aged only 10 months. But of the children who reached adulthood, one daughter, of course, was Marion, who had married shoemaker Hugh Urquhart in 1887 and was now living in Alness. I note that another daughter, Helen, married a baker living in Farness, Walter Ross, in 1884 in Jemimaville. And the third daughter, Jessie, married another Alness shoemaker, George Cameron, in Balblair in 1903, maintaining the family connection with shoe-making. As for the son, Donald, I have been unable to trace him after he left Jemimaville, though the Kirkmichael headstone says he died in London in 1902.

Marion’s parents, as recorded in the Ross-shire Journal, were highly regarded locally, and their funerals well attended at Kirkmichael despite stormy weather. In due course, a handsome granite memorial was erected at the west side of the old section of the kirkyard, with an inscription which starts with:

Hugh, Marion and young Jessie Helen had been living in Alness for quite a few years when Marion herself passed away, from diabetes. Her quaint, white scroll memorial was erected close to her parents, albeit with nothing in the inscription to indicate the connection.

The Kirkmichael Trust took action in 2018 to raise Marion’s memorial out of the ground and make it upright once more, as it had sunk downwards and tilted over to an alarming extent. It the process of doing so, half of an old sandstone inscription relating to a local Morrison family was found being used as part of the foundation. We replaced this with a blank piece of sandstone when raising and straightening, and the story of this small project is set out in the Appendix.

Part of the reason for the success of the business may have been Hugh’s diversification into saddlery. He announced via the Ross-shire Journal of 13th October 1893: 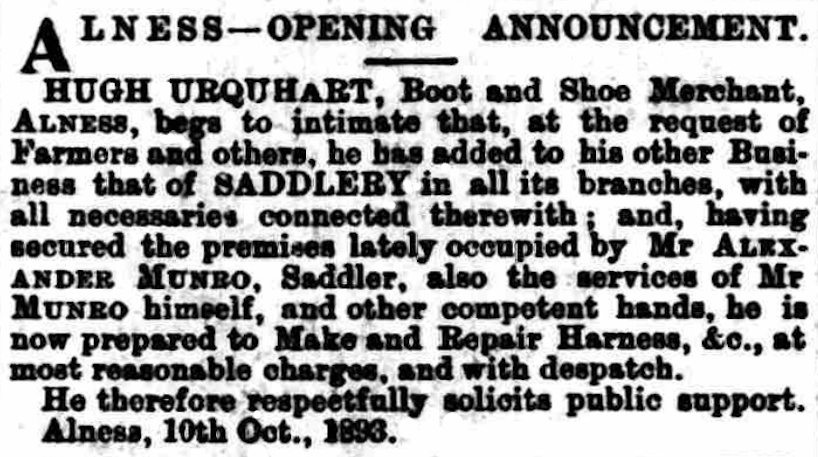 Fifty years later, the business would be known as “Hugh Urquhart & Son, Saddlers, Alness” so this was an astute business move. Back in 1901, as I say, the size of house occupied by the family is shown in the census return of that year to have increased dramatically, and I note that one of Hugh’s cousins had moved in to keep house:

Alness High Street, on which Hugh Urquhart had his shop, although the children obviously were used to doing without such luxuries

Later in that year of 1901 Hugh remarried, in Portsoy. His wife was one Annie Mackenzie and by 1911 there was a new wee family in Alness, as they now had Hugh, who would become the “& Son” of the company in due course.

Advertisement by the young Hugh Urquhart in, surprisingly, the Brechin Advertiser of 4 March 1947

Hugh junior would go on to marry Margaret Annie Brebner Smith at the Northern Hotel, Aberdeen, in 1931, when the groom was given as (what else) “Shoemaker (master)”. They are both buried in Alness Churchyard. 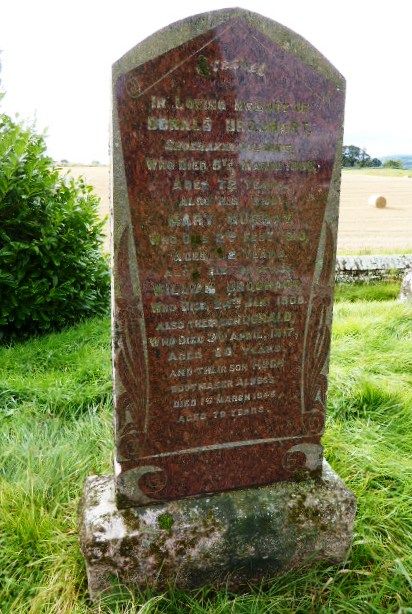 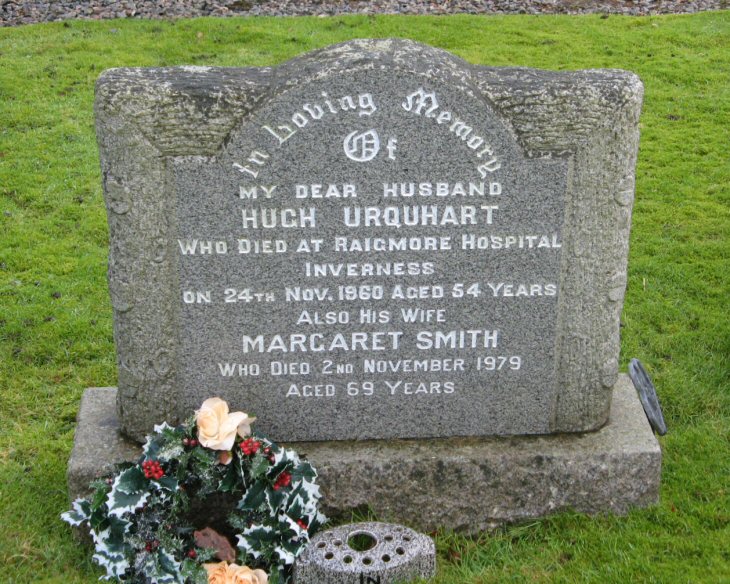 Curiously, while his father, Hugh senior, takes his place at the base of the family gravestone in Old Urquhart cemetery, neither first wife Marion Urquhart nor second wife Annie Mackenzie is commemorated on this memorial:

To return to 1911, though, Hugh senior, his new wife Margaret and Hugh junior were present in Alness. Their house presumably was the same one as it is recorded as having six rooms with one or more windows. And note the association with the Mitchell family through their domestic servant, Rose Mitchell.

But where was daughter Jessie Helen? I feared the worst. It would have been too sad if the only child of Marion had passed away. But not a bit of it. She re-appears in 1916, marrying, in a break with tradition, an engine driver named Mitchell, from Bridgend Alness:

Jessie Helen and James Alex would go on to have many children over the years, but as this is getting closer to the present day than our usual Story behind the Stone we will leave the family at this point.

The family information on the headstone at Kirkmichael; photo by Andrew Dowsett

Appendix: Straightening the memorial to Marion

The odd lumpy stone with its face carved into a scroll, commemorating Marion Urquhart, was close to falling over.

As a makeshift foundation, two slabs of sandstone had been placed in the soil and lime plaster daubed on to hold slabs and memorial together. Over the years the small edifice had sunk into the ground and had began to tilt over, eventually to such an extent that the Kirkmichael Trust in 2018 took it apart to relay it, raising it out of the ground and making it level once more.

To our surprise, one of the sandstone slabs was a section of the top of a tablestone memorial, bearing half an inscription, albeit mostly obscured by lime plaster. The other half of the inscription is under a Morrison memorial, and there is enough visible between the two sections to show that it was a Morrison tablestone. Whether or not the Urquharts had permission to use the broken Morrison slab for this purpose is not known! We used an alternative piece of plain sandstone to erect the small memorial vertically once more, as set out in our pictorial story. 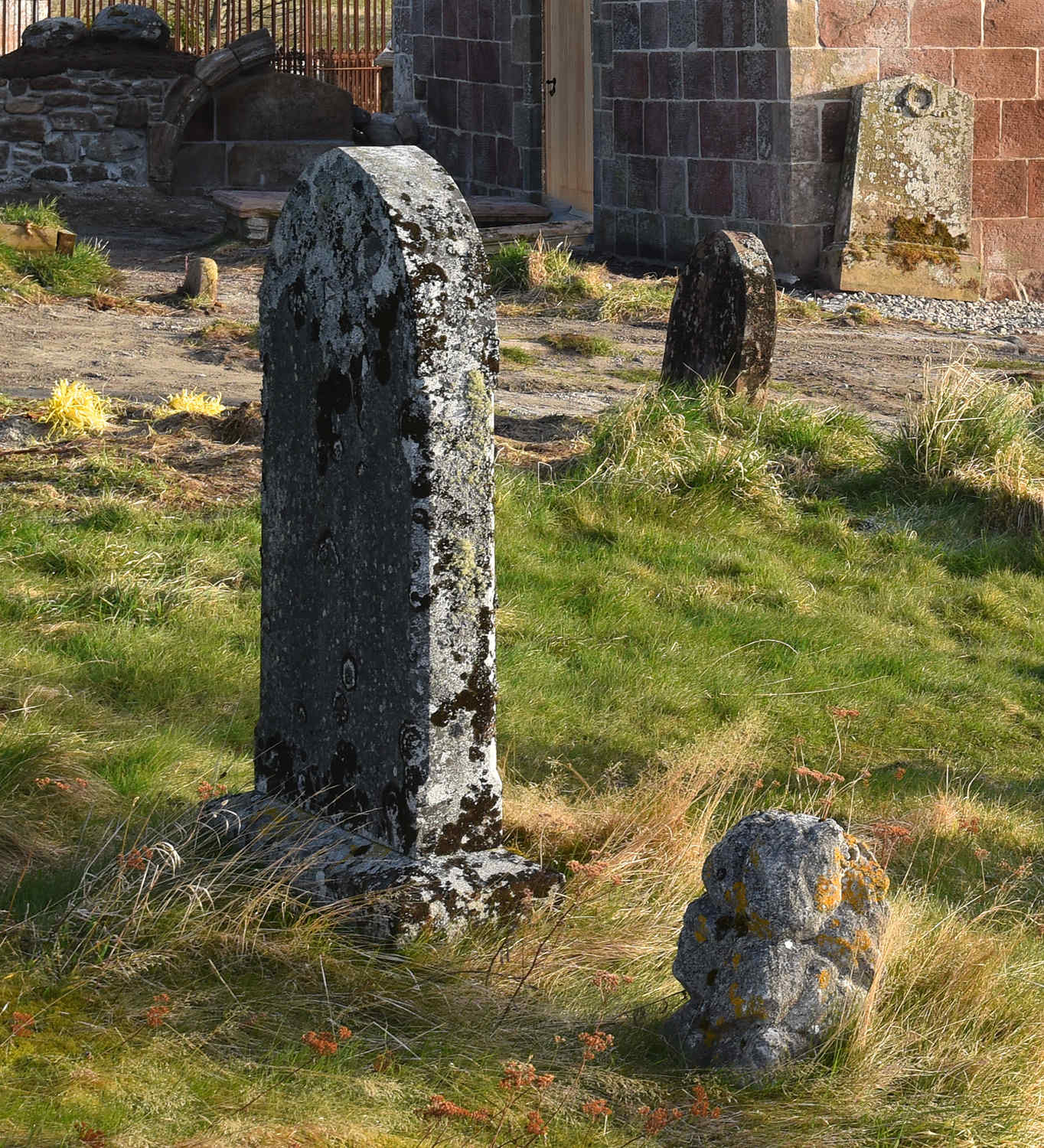 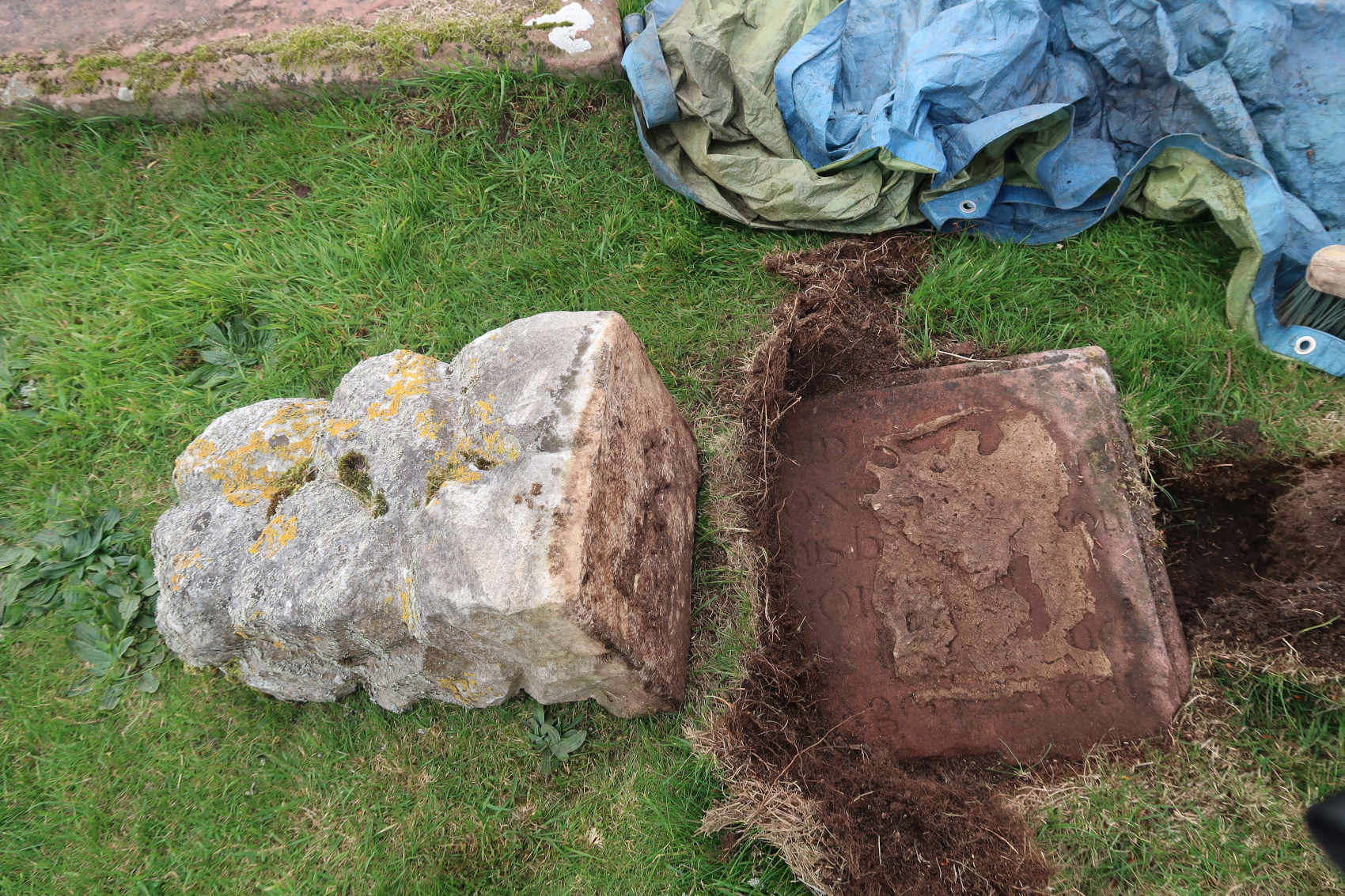 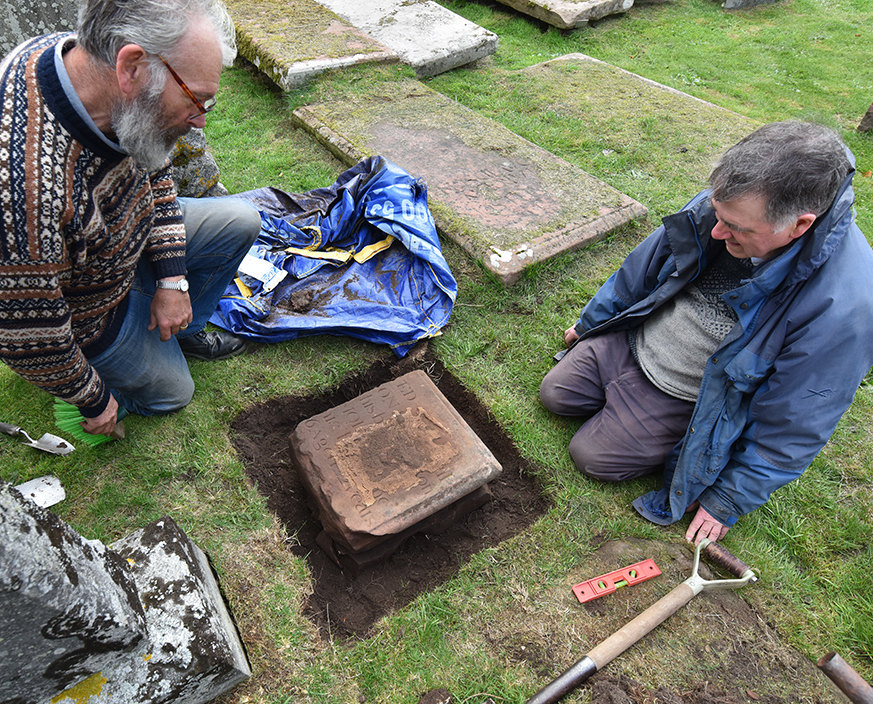 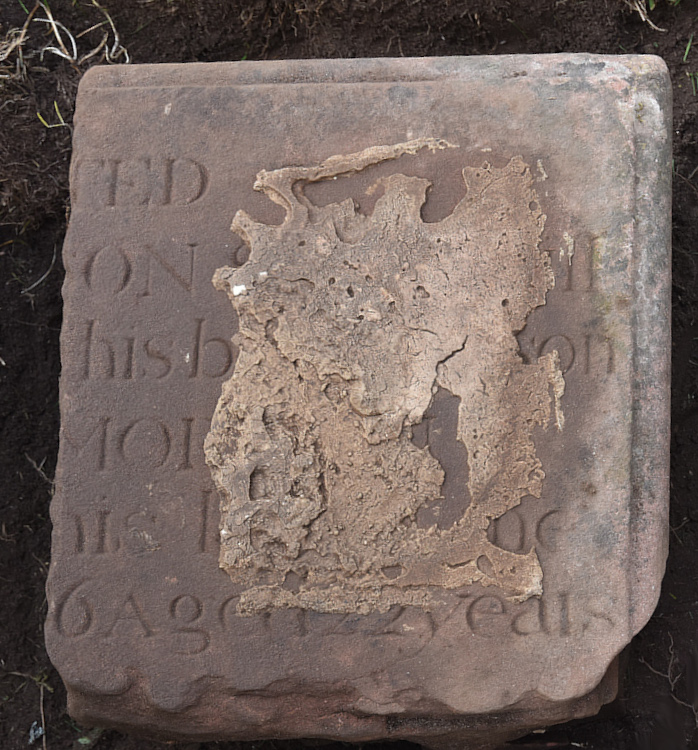 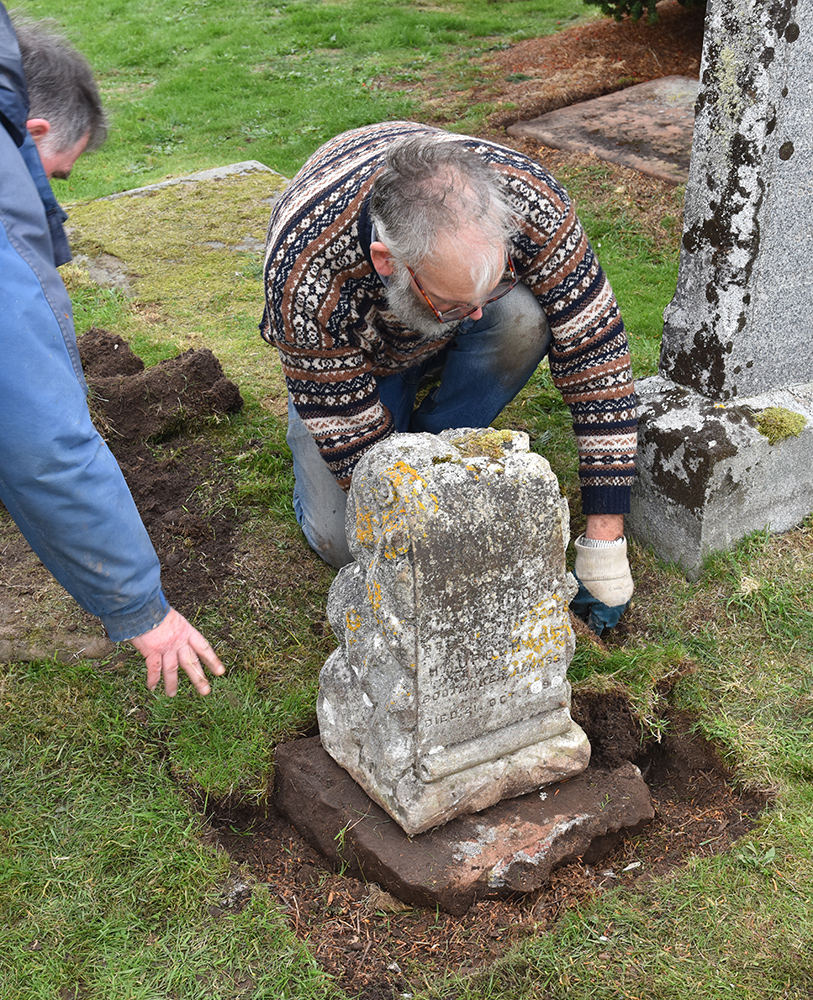 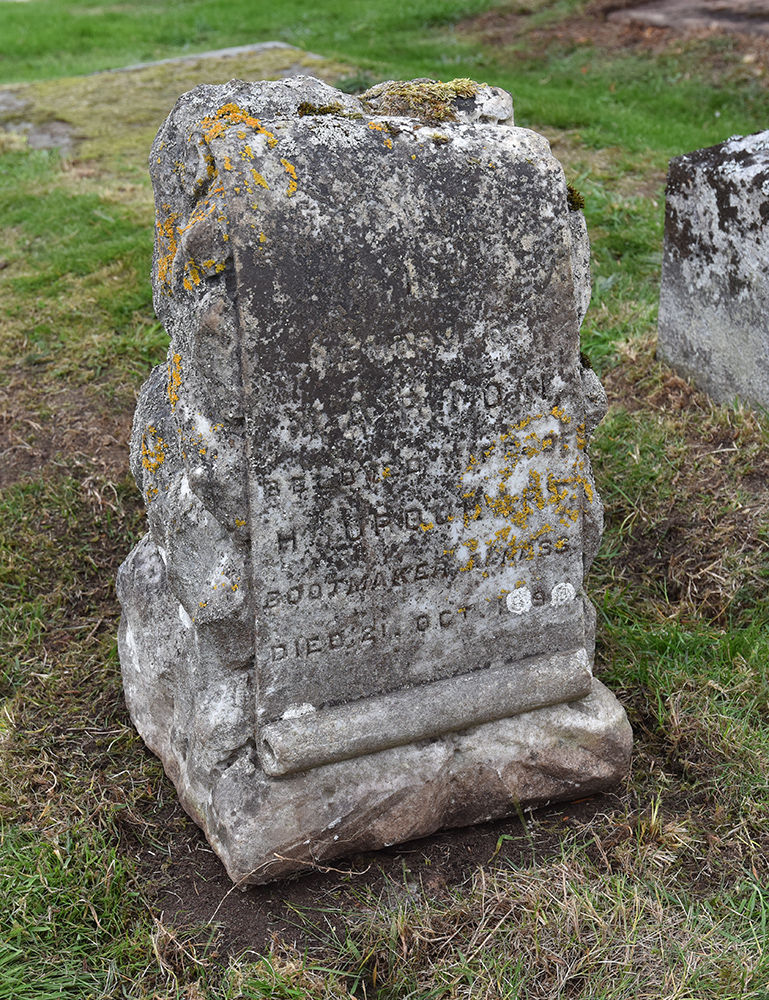