The Family of John and Isabella Ferguson of Woodside, Cromarty

Alexander Ferguson was a mason, and perhaps he had a physical hand in the carving of the tablestone erected to his father and mother in Kirkmichael. It stands close to the main path to the chancel and I confess it is often used by our work party as a handy depository of coats, scarves, bonnets and thermos flasks! It bears an attractive opening flower bud on each support stone and it would be nice to think they were carved by Alexander himself. It reads: 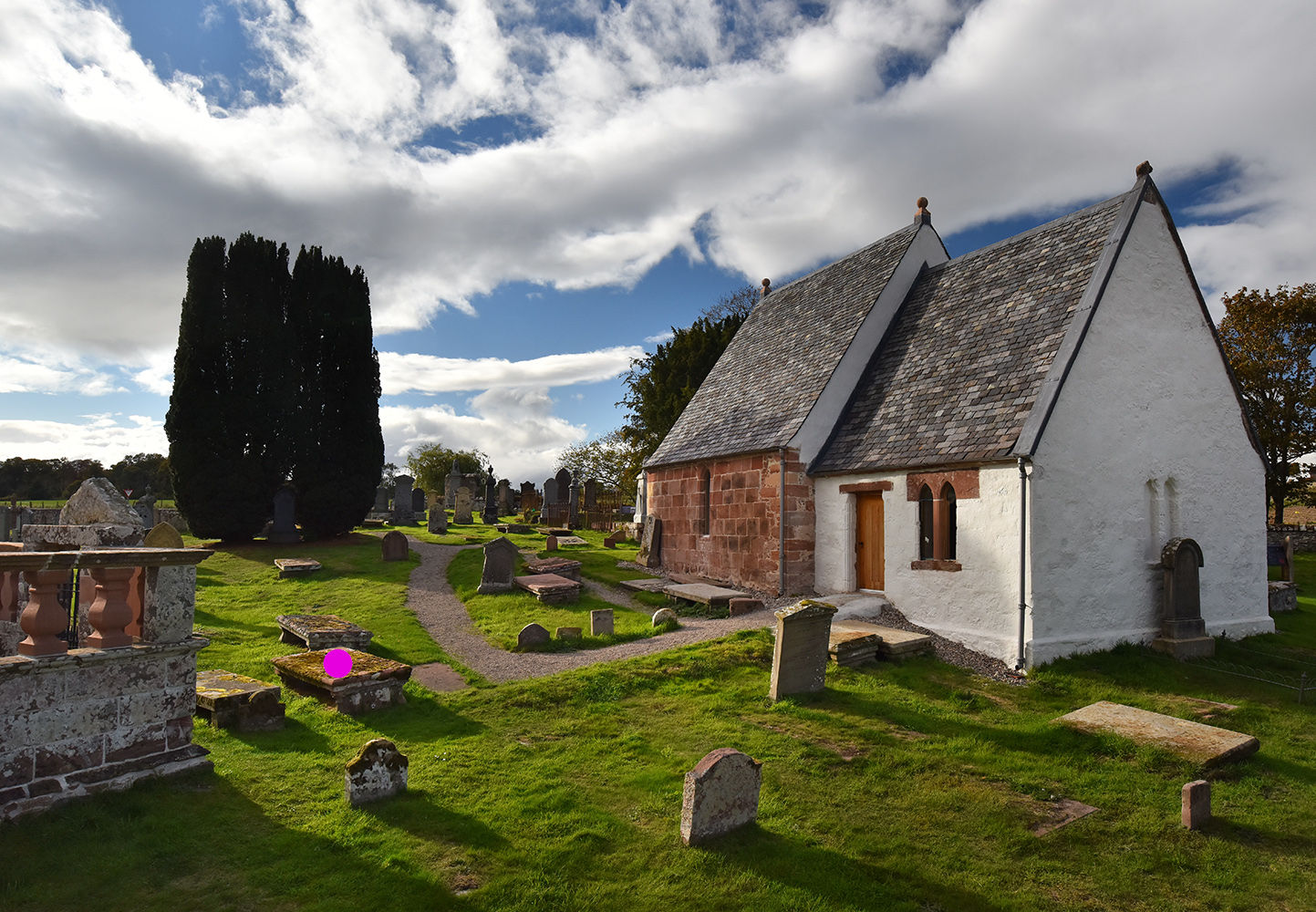 The Ferguson tablestone (pink-spotted) lies between the Grants of Ardoch enclosure and the chancel; photo by Andrew Dowsett

Like so many of Kirkmichael’s tablestones, the family was based in the agricultural hinterland of the town of Cromarty, in the neighbouring parish of Cromarty. John Ferguson and Isabella Ferguson resided at Woodside, the farm half way between Jemimaville and Cromarty, on the hillside. The white walls of Kirkmichael stand out well from Woodside, and a succession of MacCullochs, for long the tenants in Woodside, are also buried in Kirkmichael.

Woodside in 1764; the name of McCulloch the tenant can just be distinguished, but labourers like the Fergusons are not shown

Alexander Ferguson is the only child recorded in the Cromarty baptism register to the couple, and the entry itself is particularly un-informative:

The term “in the Country” I assume is used to distinguish those born in the parish but outside the town of Cromarty itself. We have no record of their marriage, which is surprising as marriage records are certainly extant in Cromarty for the likely period. However, there is a great gap in the Baptism register in the neighbouring parish of Resolis, with only a scatter of entries between 1769 and 1803, which makes me suspect that Isabella Ferguson was of a Resolis family.

Whilst there is no record of the marriage of John and Isabella, there is surprisingly for the period two records of their deaths! We have the tablestone itself, and Cromarty is one of the few Scottish parishes with a death or burial register for a significant period.

The tablestone inscription is the more helpful as it sets out the relationships, but it is useful to have the written corroboration. 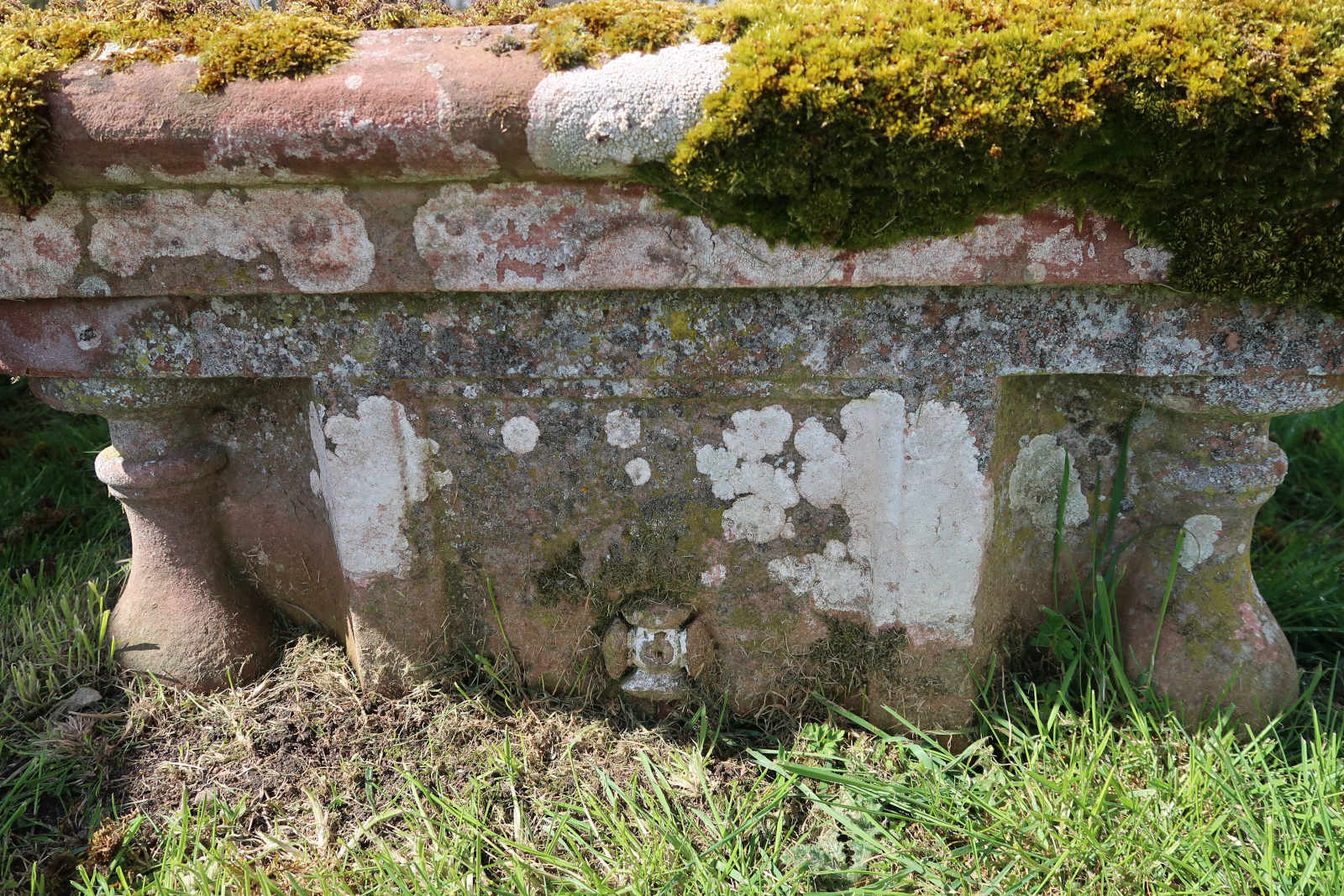 the eastern support on the Ferguson tablestone at Kirkmichael; photo by Davine Sutherland 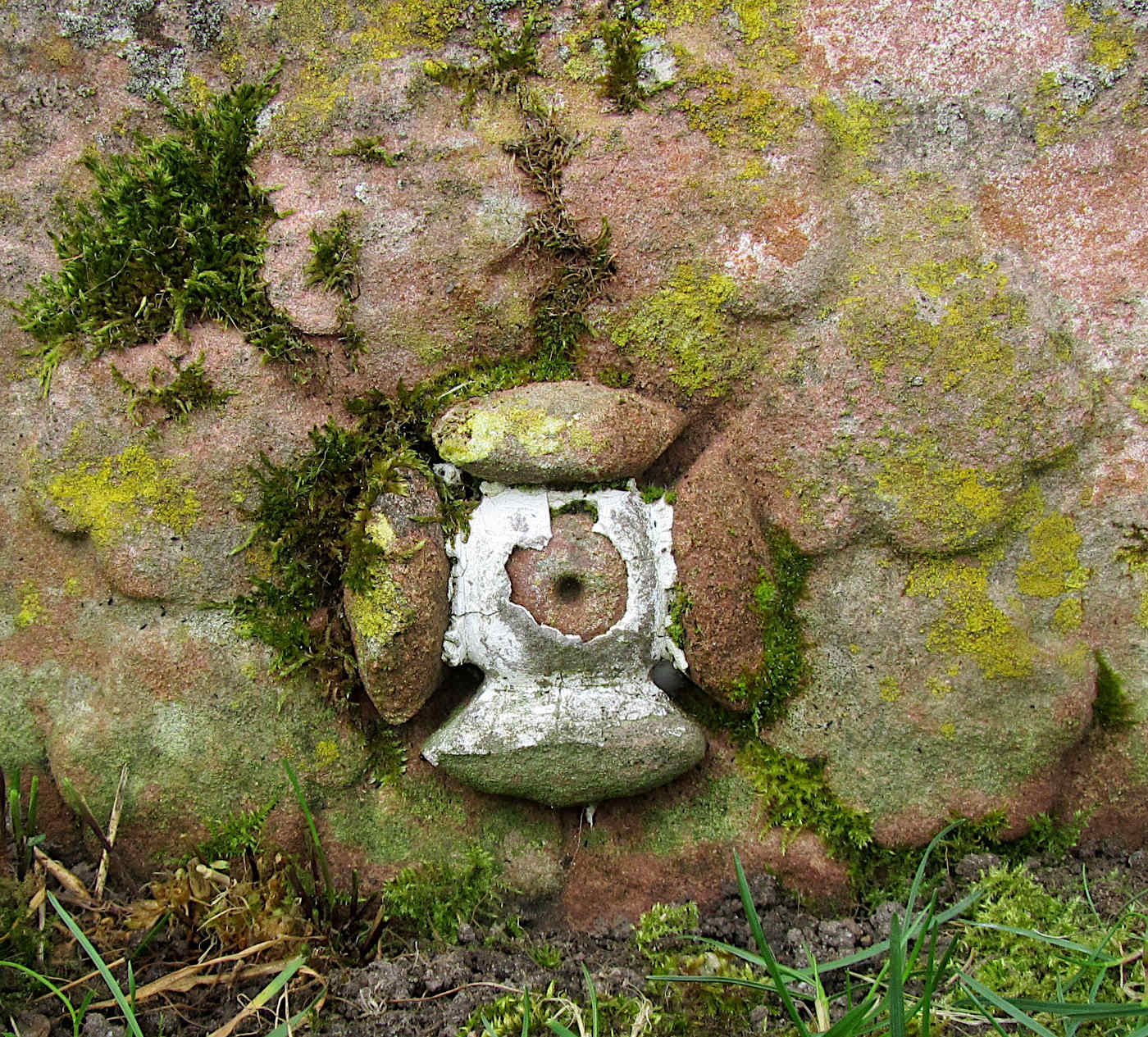 While John Ferguson was a labourer, I presume an agricultural labourer, son Alexander did not follow in his father’s footsteps; instead, he became a mason. It is not clear what sort of mason he was &bdasgl he may have worked in Cromarty quarry, he may have carved gravestones, he may have built houses. Given that Hugh Miller, the Cromarty stonemason, was born in 1802, the two must have been acquaintances.

Alexander was in Woodside not long before his father’s death, as we have a report of him being pursued for a debt (National Records of Scotland, SC24/10/13, 1826):

It was not a great sum to pursue anyone for, even two hundred years ago, but legal processes were followed to recover debts when progressing probate if there was a good chance of recovery.

Alexander moved into the little town of Cromarty from Woodside and became a mason, and married in 1838 Ann Cross from the parish of Alness. The marriage is recorded in the registers of both parishes:

Alness: Alex. Ferguson Mason Cromarty & Ann Cross Bridgend of Alness were married on the Fifth of July
Cromarty: July 5th 1839. Alexander Ferguson, Mason, in Cromarty, and Ann Cross in the Parish of Alness, were married

Although she was living in Bridgend at the time, later census returns state that Ann was born, depending on which census you read, in parishes Dingwall and Contin! Never rely on a single source. It emerges that her sister was definitely born in Contin, but we’ll return to that.

There are three children recorded in the Cromarty baptism register to the couple, John (1840), Williamina (1846) and Thomas (1848). As Thomas doesn’t appear in later census returns I think sadly he must have died in childhood. But John and Williamina went on to raise families themselves, large families at that, and Williamina’s social status escalated to the point where her boys were considered gentlemen.

But this was in the future and far from the Black Isle. Back in Cromarty, from which Alexander never seems to have stirred, Alexander became impoverished in his old age and qualified as a pauper. Thus in 1861, the Census return gives: 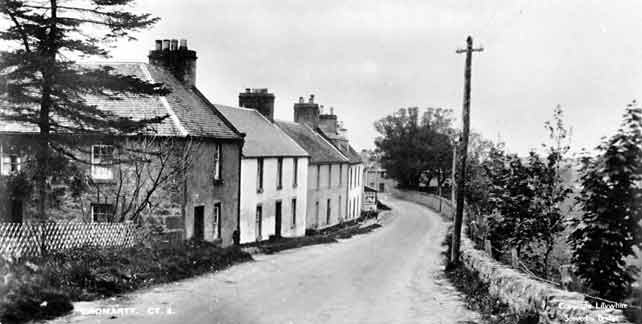 Denny Road, Cromarty, as surveyed by the Ordnance Survey in 1904

From 1841 through to 1871 census returns, Alexander is recorded at Denny in Cromarty – Denny Street, Denny Brea, Denny Road – I presume most if not all of these addresses were in fact the same location – the Denny, leading down from the high ground above Cromarty. He died in 1871, and the informant at the registrar’s helpfully was a niece:

[As an aside, the certificate bears the niece’s signature, and there will be a clue to the antecedents of these Fergusons if she could be positively identified. I think she was likely to have been Mary Ferguson ms McPherson, the widow of Donald Ferguson, an agricultural labourer at Davidston, who unfortunately died prior to civil registration, in 1847. However, I think Donald was the son of James Ferguson and Katherine Williamson in Davidston, so James would have been a brother of Alexander the mason, and if these suppositions could be corroborated it would perhaps permit a keen family historian to push the family back beyond John Ferguson in Woodside. Aside over!] 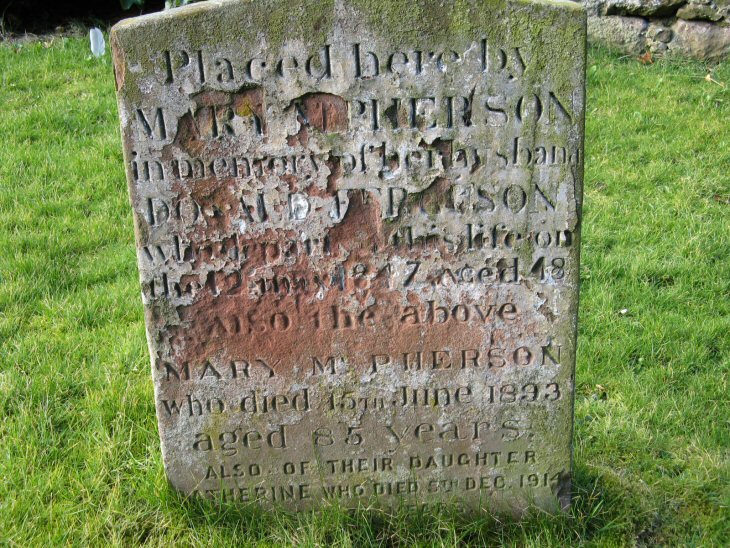 Curiously, I simply cannot trace the death or burial of Ann Ferguson ms Cross. She is still in the Denny in Cromarty in 1881, but thereafter I have been defeated. And without her death certificate I could not identify her parents with any certainty. However, I tried another track. I had noted that in 1841, her husband Alexander was in the Denny, but Ann was over in Alness in a household comprising:

I have to say this was a bit tenuous in itself, but on the basis that this was Ann back at home with her first infant child, the Christy Cross was likely to be her mother. Somehow the census enumerator became confused, as the 10 month old son was John Ferguson and the absent father was Alexander Ferguson, but he mixed them up, so little reliance can be placed on this record. But until her death certificate was located, this was the best we had. But a little lateral thinking later, and I realised that there are very few ladies named Christian Cross (!) in the records, and she may have survived through to civil registration. Bingo! In fact, she had come over to Cromarty to reside with her daughter in her last years, and Ann fortunately was the informant at the registrar’s thus removing any residual doubts:

It is never helpful to say “widow” without saying who the husband had been. Nevertheless there are so few Cross/Stewart marriages that we can be certain that these are Ann’s parents named at the birth of what has to be a sister, in Contin:

No other children, no marriage, and no gravestone of this couple can be traced but we can be confident that William Cross and Christian Stuart were the parents of Ann Cross.

While Alexander was a mason, his son John, after an initial spell as a sawyer, became a quarryman. He travelled the length of Scotland with his family to follow his trade. He married Edderton girl Ann Ross in Edderton in 1864, and the family continued to live there for several years.

I note from the 1901 census that he had given up quarrying and had become a grocer and church officer for the Established Church; in the 1911 census his occupation is given as simply church officer. The church officer was responsible for routine church administrative activity like ringing the bell, securing fines and, not least, digging graves.

The couple must be commemorated by a gravestone but I have not successfully located it.

Williamina was a 15-year old girl and just still at school in Cromarty when the 1861 census was taken, but went away to service. In 1871 she was a cook in the household of a pair of McFarlane sisters in Bridge of Allan (parish of Logie), and met an army man. They married in Dunblane:

The history of the 6th Regiment of Foot stretched back several hundred years over many conflicts; however, as paymaster sergeant Williamina’s husband would not have been involved in the fighting himself. Within a few years he had become quartermaster, a much more senior post. In the British Army, the quartermaster is the officer in a battalion or regiment responsible for supply. By longstanding tradition, they are always commissioned from the ranks and hold the rank of captain or major. Williamina was now the wife of somebody holding a very responsible role.

The couple had many children, and I won’t go through them all in detail. However, I will draw attention to one birth – simply because Williamina returned to Cromarty for the event!

I presume from the fact that Williamina registered the birth herself, her husband was on active duty at the time. 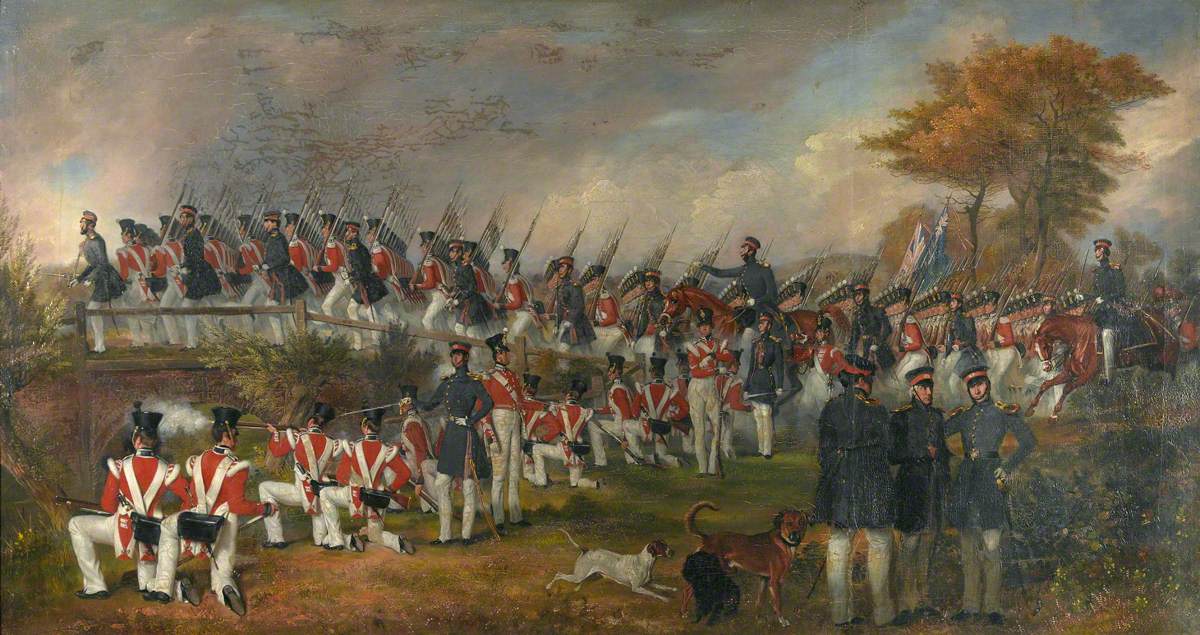 The 6th Regiment of Foot training how to cross a bridge in wartime, as painted by Daniel Cunliffe in 1843

On James’ retirement, the couple set up home at 5 Tower Villas, South Woodford, in Essex. I see them there in the census return of 1891 (and at the same house in 1901 and 1911). You can tell some of the places where James served from the birth locations of their children, as recorded on that census return of 1891:

SPECIAL RESERVE
East Surrey Regiment. –Major James Berryman Tippetts, of South Woodford, late of the regiment, who died on May 6, was appointed Quartermaster of the 1st Surrey Militia in October, 1873, and granted the honorary rank of Major in September, 1885.

Williamina lived through the Great War, dying in 1919, and her probate record is as follows. A far cry from her pauper grandfather!

Born in Cromarty, she is buried in Chingford Mount Cemetery, Greater London. I have been unable to trace her memorial. However, in the attempt I have found that the most famous, or should I say notorious, people to be buried in this cemetery are, unfortunately, the criminal Kray brothers. Not an association she would have relished!

Back in Kirkmichael, the tablestone erected by Williamina’s father in honour of his parents is always in the centre of activities. It is one of the few tablestones which has not needed any remedial work by the Trust. But it features in many of our pictures simply because of its position between the chancel and the Grants of Ardoch enclosure. With all our visitors milling around in its vicinity it is therefore most appropriate that we know the Story of the family behind it. 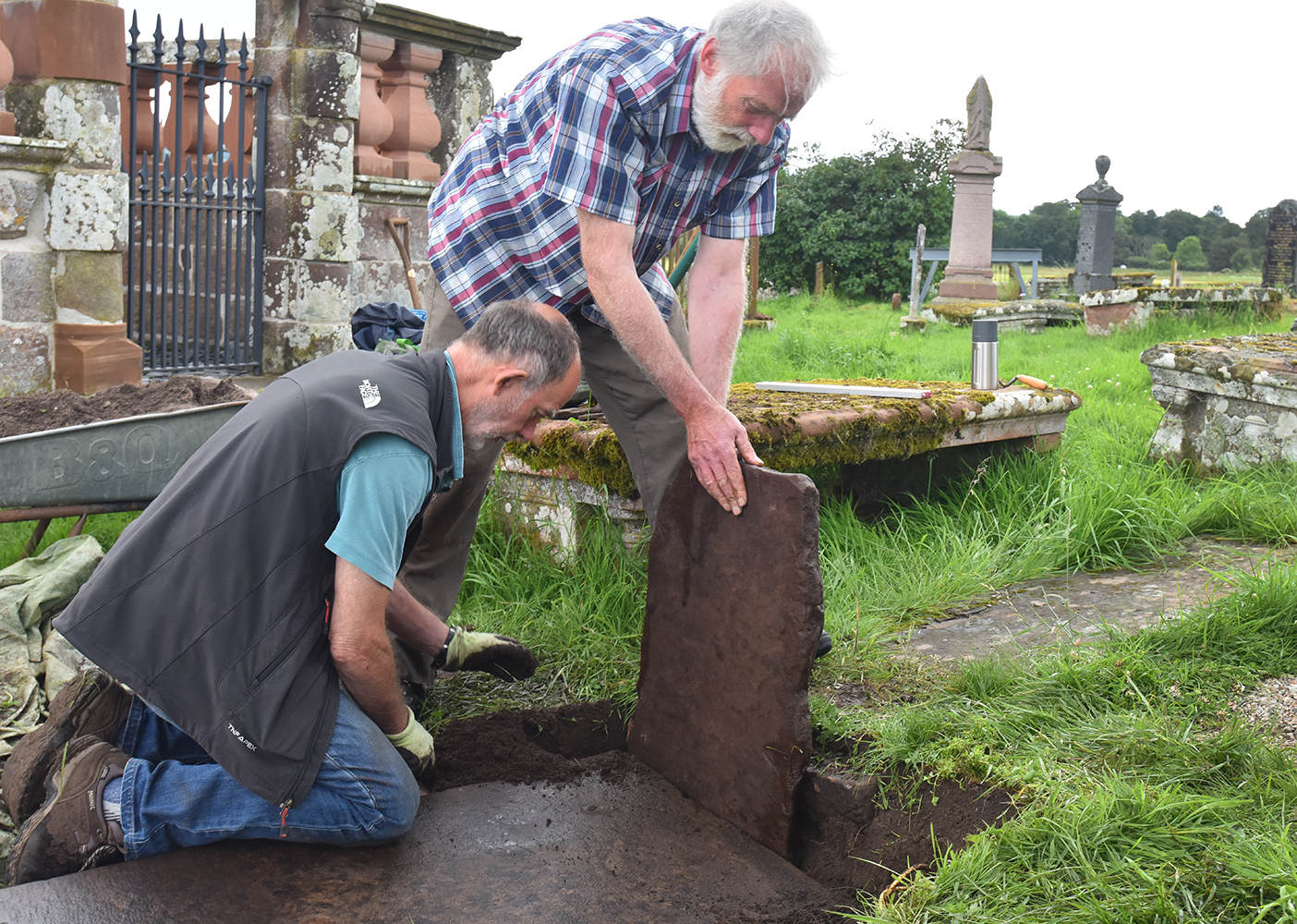 The Kirkmichael Work Party in operation – and the inevitable thermos flask on the Ferguson of Woodside tablestone; photo by Andrew Dowsett 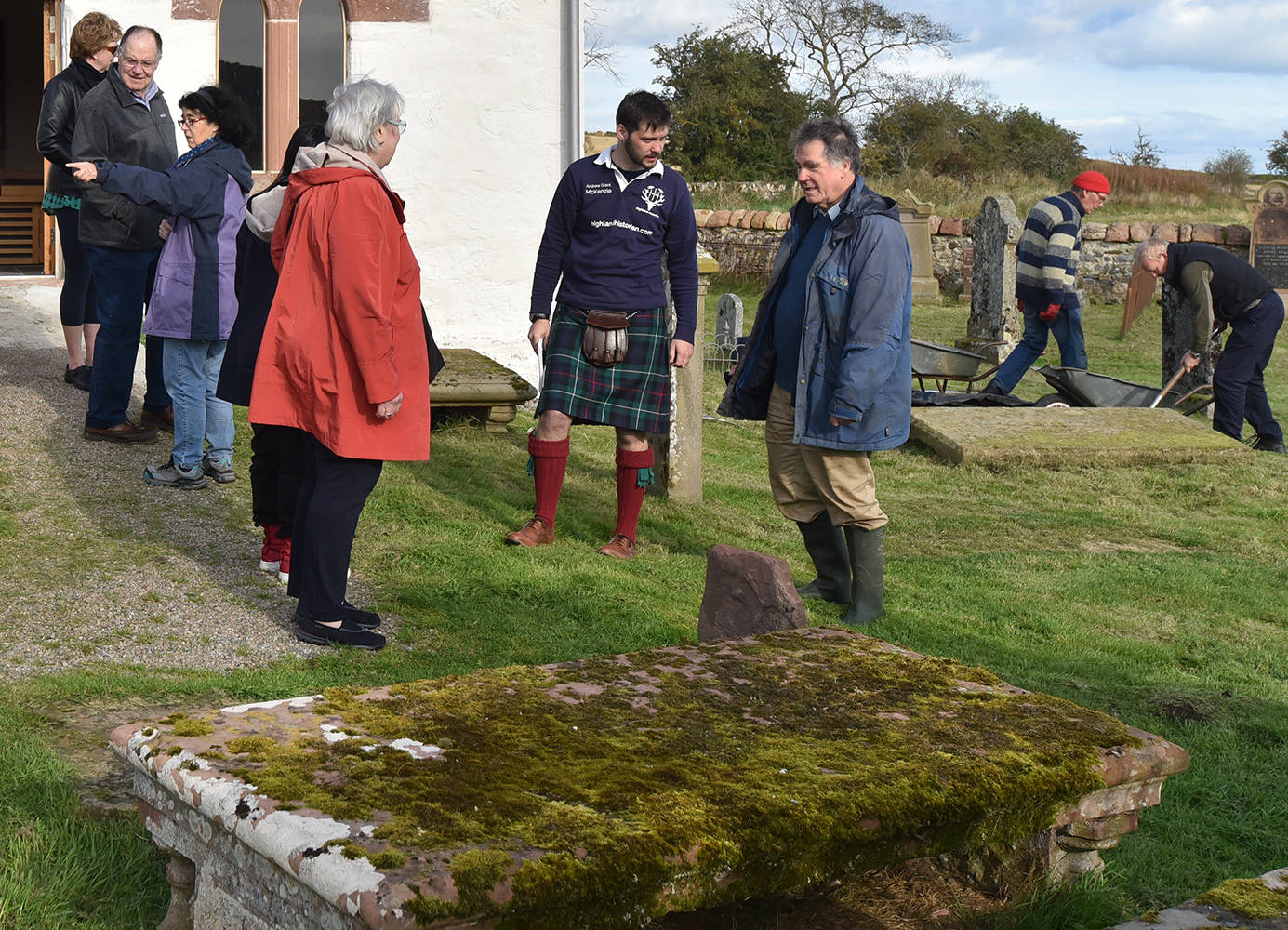 the busy area at the front of the chancel in which the tablestone sits; photo by Andrew Dowsett