The Tenant of Ballicherry: James Munro and his spouse, Margaret McKenzie

text by Dr Jim Mackay; all photography by Andrew Dowsett unless otherwise indicated

It is one of our most distinctive headstones. On one side we have an inscription and a delicate flowerbud opening. On the other a coffin. The symbolism is very striking. 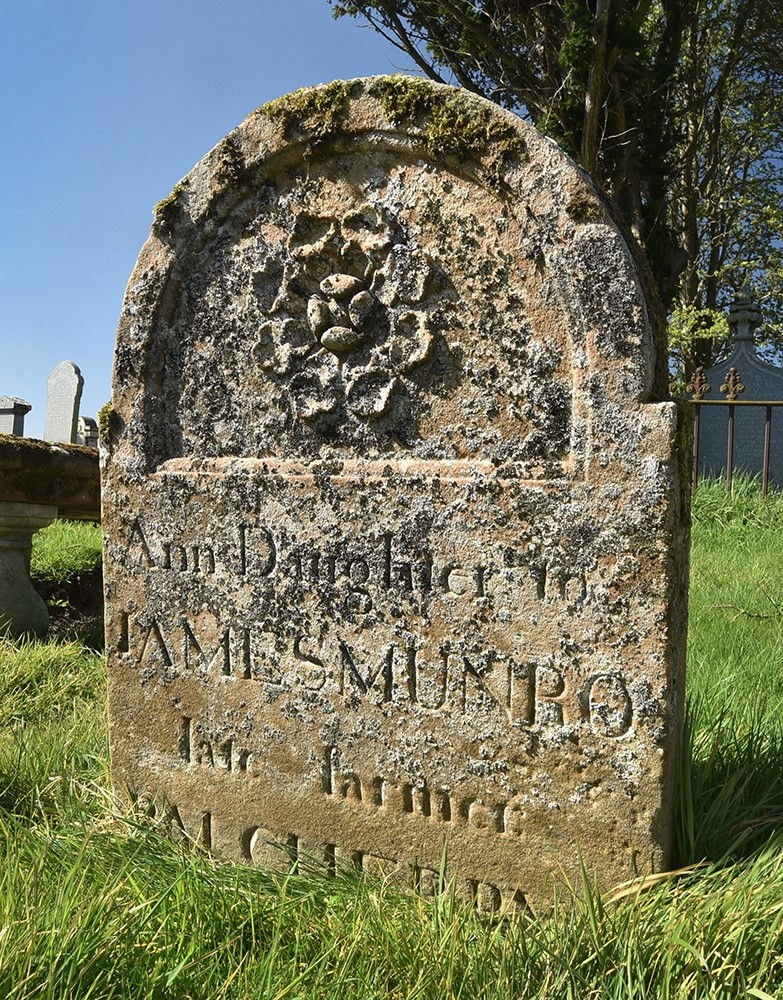 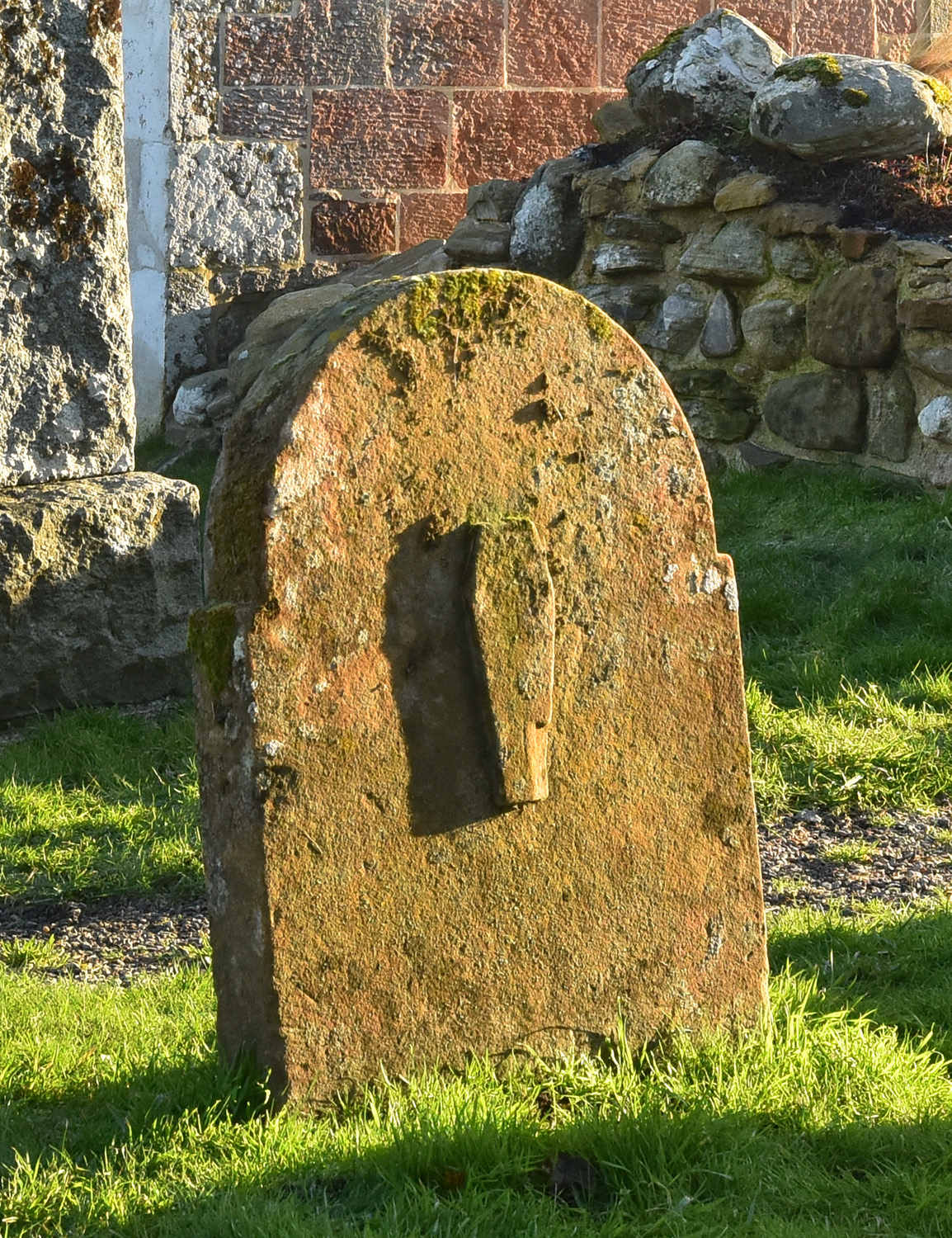 The Munro Family arrives at Ballicherry

James Munro and his spouse Margaret Mackenzie, from the parish of Croy, were attracted to the parish of Resolis following a series of advertisements promoting the forthcoming lets of land on the Estate of Poyntzfield.

Inverness Journal 30 October 1807
The ESTATE OF POYNTZFIELD, Situated in the Shires of Cromarty, and Sutherland.
Notice is hereby given to Farmers, and Graziers, that all the Low Country and Highland Farms upon that property are now open, and will be Let on Leases, of from 7, to 21 years, as may be agreed upon.– Entry at Whitsunday, 1808.
The following CORN FARMS at POYNTZFIELD, viz. EASTER and WESTER BIRKS, BALLISKELLY, EASTER and WESTER BALLICHERRY, TEANINICH, and LITTLE ARDOCH, are of moderate sizes, from about 60, to 120 acres each, beautifully situated upon a gentle declivity, on the south side of the Cromarty Frith, within one mile of the sea, and five of the sea-port town of Cromarty; having a Northern exposure. The soil is good, and capable of great improvement, having several patches of rich Woodlands, which might be cultivated to advantage. These Farms have also the conveniency of abundance of wood and water, and a Flour and Corn Mill in the vicinity. Large Plantations of FIR and HARD WOODS are likewise upon the property.– LITTLE ARDOCH is regularly inclosed, and subdivided into Ten Fields, all the rest are uninclosed, and may be thrown into Larger Farms, to suit offers from spirited Improvers, who may depend upon every encouragement. The Farm-houses are also comfortable of their kinds, … Offers addressed to the Proprietor, Lieut. Col. Munro of Poyntzfield, by Cromarty; to Kenneth M'Kenzie, Esq. W.S. Edinburgh; or to Robert M'Kid, Esq. Writer in Tain, will be duly attended to; and names kept secret, if required. …

The advertising worked, as the Munro family came over from Nairnshire to take up the tenancy of Ballicherry, presumably at Whitsunday 1808. They had married in Nairn in 1806:

And their first child was baptised in Nairn in 1807:

But their second child was baptised in Resolis in 1809:

It was a long period for a tenant on one farm, and it had not been plain sailing. I note that in 1822 the Estate was pursuing James Munro for £52.10.0d in Cromarty Sheriff Court for a half-year’s rent. He must have raised the money somehow as he was still there in 1826 but it must have been a difficult time for the family. 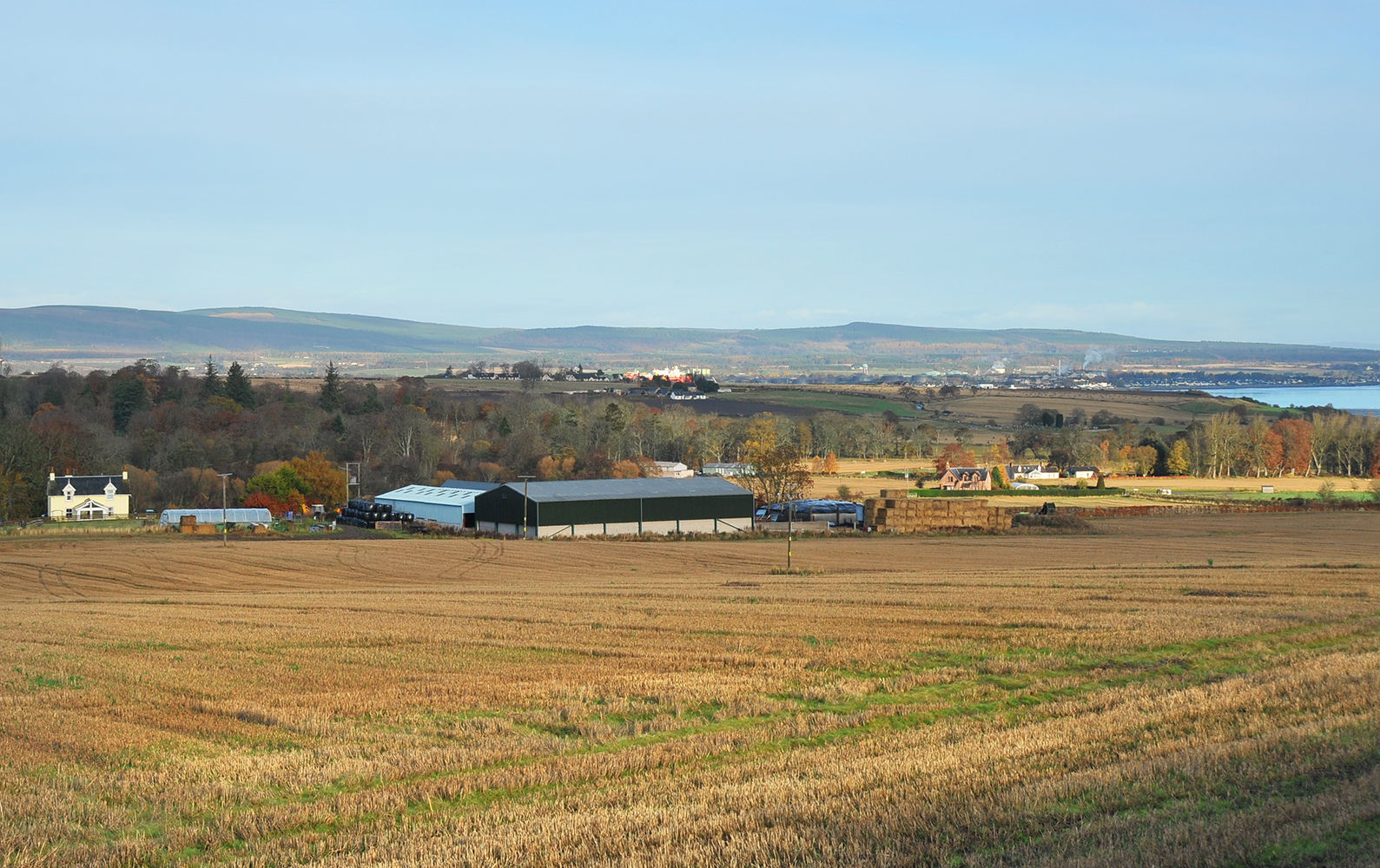 The fields of Ballicherry in 2010 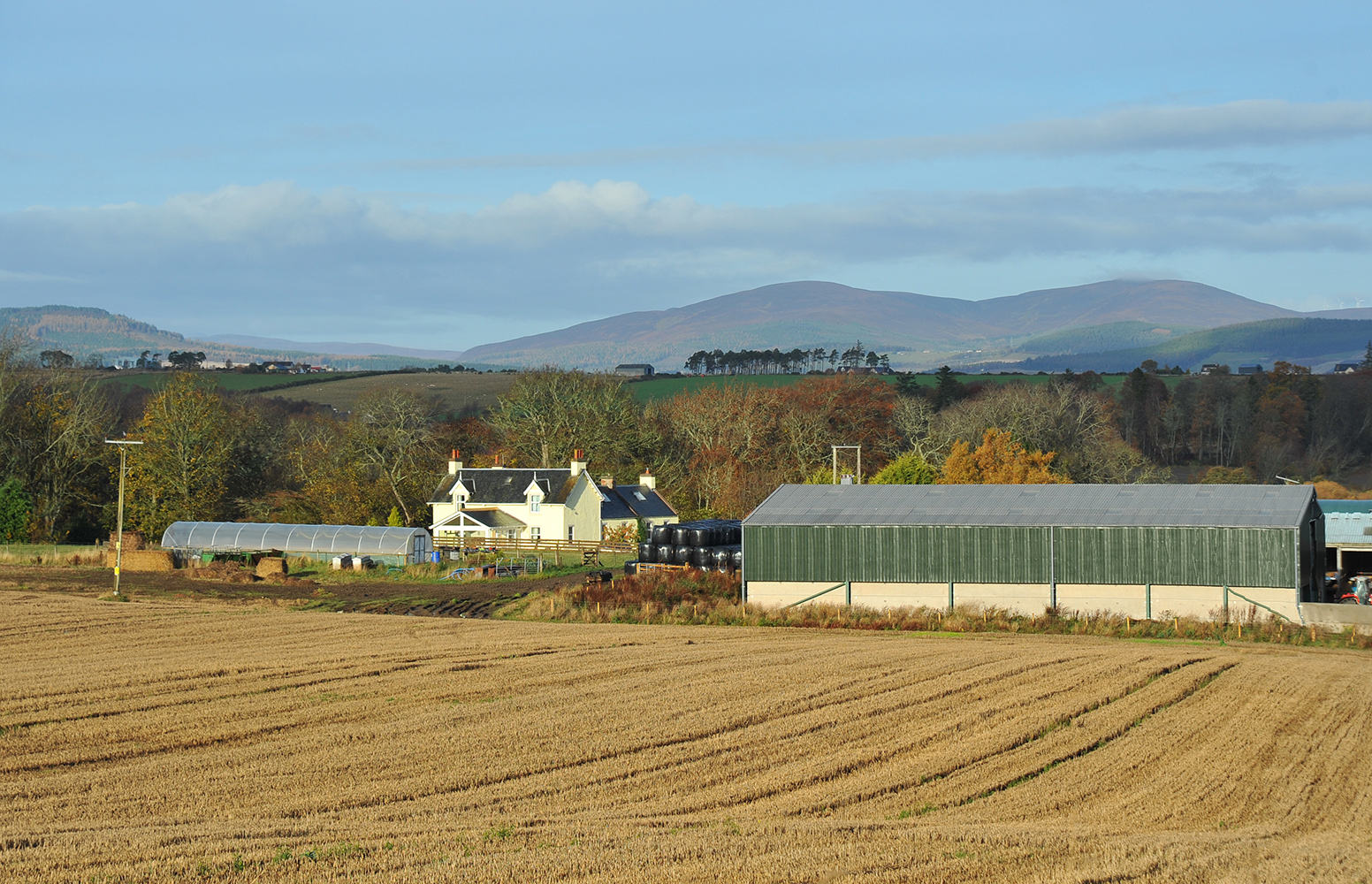 Ballicherry with the hills of Easter Ross behind, in 2010

The tacksman of Ballicherry was a respectable person in the community, and I note that James Munro was also a Constable. At this time there was no police force, but in counties in Scotland justices of the peace were empowered to appoint two constables in each parish. Their duties included attending quarter-sessions, reporting crimes and serving warrants. It was not a popular position. However, it did have one side-benefit: it exempted you from being balloted to serve in the militia:

I have very few significant records of James Munro while he and his family were resident in Resolis. There are the occasional sightings. He attended the Roup of the Farm Stocking at Newhall on 31 May 1819, for instance, as I see that “James Munro Balcherry a pair Hems -.3.6” – I imagine “Hems” were in fact “hames”, the pair of metal or wooden curved pieces that fit beside the collar of draught horses to which the traces are attached.

The distinctive headstone he organised following the death of his daughter Ann carries a curious inscription. She had been born on 9 April 1821. When had she died? Well the inscription says “Ann daughter to James Munro late farmer Balcherry” which suggests he had just quit the tenancy at Ballicherry. This had to be between 1826 (when his last child was baptised in Resolis) and 1829 (when his next child was baptised in Croy).

As customary, the Estate of Poyntzfield was advertising the forthcoming tenancy in advance, but clearly something was going on. He is described as “James Munro tacksman at Balcherrie” when his son John was baptised on 26 October 1826. But the advertisement back in January had said that Ballicherry was to be let with immediate entry:

Inverness Journal 6 January 1826
On the Estate of Poyntzfield. To be Let, With Immediate Entry, On 19 years Lease, The Fine FARM of BALLICHERRY, consisting of about 100 Acres, mostly Arable.
Also, ARDOCH HOUSE and GARDEN, with or without ten Acres of Land. Entry immediately.
FEUS in JAMEMAVILLE on very advantageous terms; also very profitable situations for Tailors and Shoemakers, who can command a little Capital, where, by letter, (post paid) or on application to Major Munro, at Poyntzfield House, by Cromarty, further particulars will be known.
Men Wanted to Trench 8 Acres.

There must have been confusion as to whether or not James Munro had already secured the tenancy for a most unusual further advertisement appeared:

Inverness Courier 15 February 1826
A Report having gone abroad, that Ballicherry on the Estate of Poyntzfield, is already Set, this is to Contradict the same; and Major Munro is ready to receive offers for it, on 19 years lease, from Whitsunday 1826.
Poyntzfield House, 14th. Feb 1826.

And yet, the next tenant came in during 1829. We know this because the new tenant, John Falconer, when taking up his voting rights, had to make a case for why he was entitled to vote. The extension of voting rights had just been promoted, initially by Stewart Mackenzie of Seaforth. This is the record, lodged on 16 August 1832 with Resolis schoolmaster George Murray:

SCHEDULE F. Part First CLAIM OF ENROLMENT, Shire of Cromarty
I John Falconer residing at Ballcherry hereby claim to be enrolled as a Voter in the County of Cromarty, as Tenant or Occupier of the Farm or Lands of Ballcherry part of the Estate of Poyntzfield in the Parish of Risolis and County of Cromarty; held by me in Lease from Major George Gunn Munro Esq of Poyntzfield which Lease is dated 25th day of June 1829 endures for 21 years and the rent is one hundred and forty pounds Sterling

Had James Munro held on for several more years after Ballicherry had been offered for immediate let in January 1826? As mentioned, James was still being described as “tacksman at Balcherrie” in the baptism records in October of that year. It would appear some kind of dispute was going on, and it may be that some case papers might yet emerge.

I think perhaps this ambivalent position resulted in James giving the stone carver that curious inscription to be carved on the headstone.It is likely then that poor Ann died and the headstone was erected somewhere between 1826 and 1829. And it seems hard for poor James and his family to be leaving Ballicherry after such a long residence in a dispute. 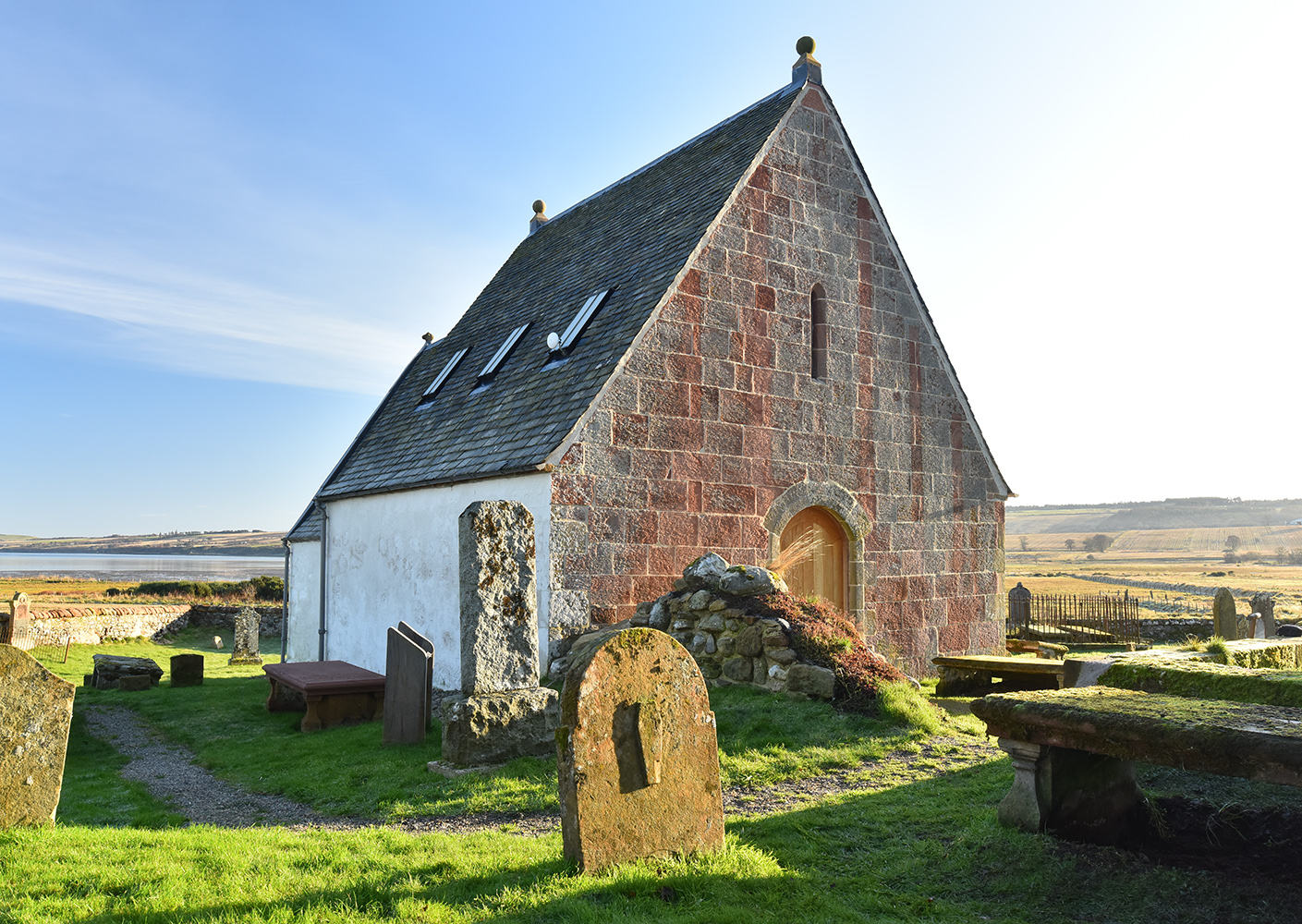 The family next appears in 1829 at Cantraybrea (Cantraybray) in the parish of Croy and Dalcross when their final child was born:

At some point thereafter they moved to the farm of Dalgramich, on the Cantray Estate, owned by the Davidson family, and remained there for the rest of their lives, albeit in reduced circumstances.

Rhoda of course was born in Resolis back in 1824, presumably named after Margaret’s father Roderick. It was an error to include a “y” by her name indicating she had been born in the county. By 1851 James and Margaret were living by themselves:

And it was at Dalgramich that Margaret died in 1859:

James moved into Nairn following the death of his wife, to reside with one of his children, and a few months later passed away himself:

I note grand-child Mary did not know her grandfather’s parents, but we know from James’ age and birth place that they were Hugh Munro and Margaret Nairn, and that he had been born in the parish of Croy and Dalcross in 1776.

Both James Munro and Margaret Mackenzie were buried in the kirkyard at Cawdor, although I do not think there is a memorial commemorating them there.

I have not tracked all the children. I do note that daughter Elizabeth (1809–1902) married Alexander MacGregor in 1831. I understand from the web that she emigrated to, and died in, Cottage City, Maryland, U.S.A., although in reality she died aged 93 in Fern Cottage, Nairn, so make of the web what you will. I note the informant at her death was daughter Mary McGregor, she who could not recall her grandfather’s parents. I also note that another daughter of James and Margaret, Mary Munro (1817–1863), married John Rose in 1860 but died shortly after the birth of their second child, who also died after a few days. The first child established quite a family line in his own right. There is a wonderful image of John Rose at the family farm of Daltra, which has been kindly provided to me by Sarah Brodie of Lethen House. John Rose and Mary Munro have a memorial in Ardclach kirkyard. However, we are getting far from Kirkmichael, where the memorial to daughter Ann is the sole record of their tenure at Ballicherry, so we shall draw this Story to a close. 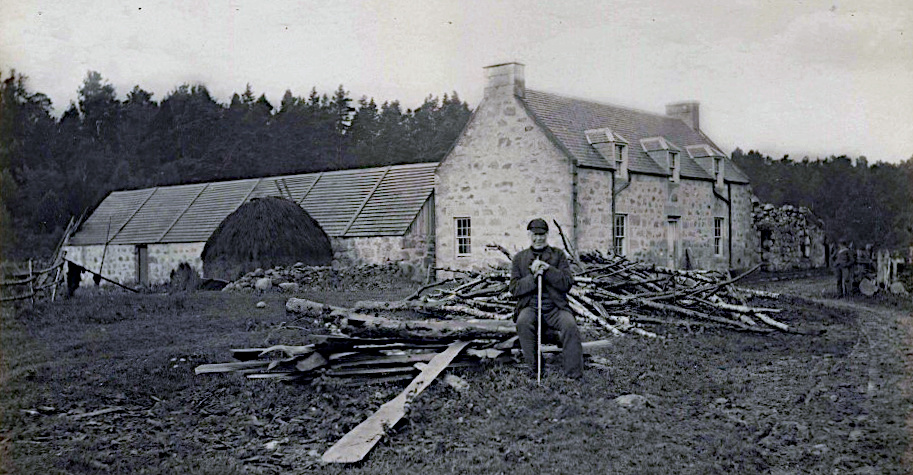 John Rose at Daltra Farm in 1884, twenty years after his wife Mary Munro had died; thanks to Sarah Brodie, Lethen House, for the image

We published a Facebook post about our re-erecting a collapsed headstone near the entrance of Kirkmichael. It was erected by a John Falconer in honour of his father:

A descendant, Yvonne Stuart of Portgordon, whose mother was a Falconer, subsequently visited the site and emailed to say she thoroughly enjoyed the visit. And then she added: “I noticed another gravestone very similar to ours. I wondered if the stonemason could have been the same person. It’s directly on your right as you leave the church. I’ve attached a photo.”

The headstone she was referring to was in fact this one, erected by James Munro to commemorate his daughter Ann. 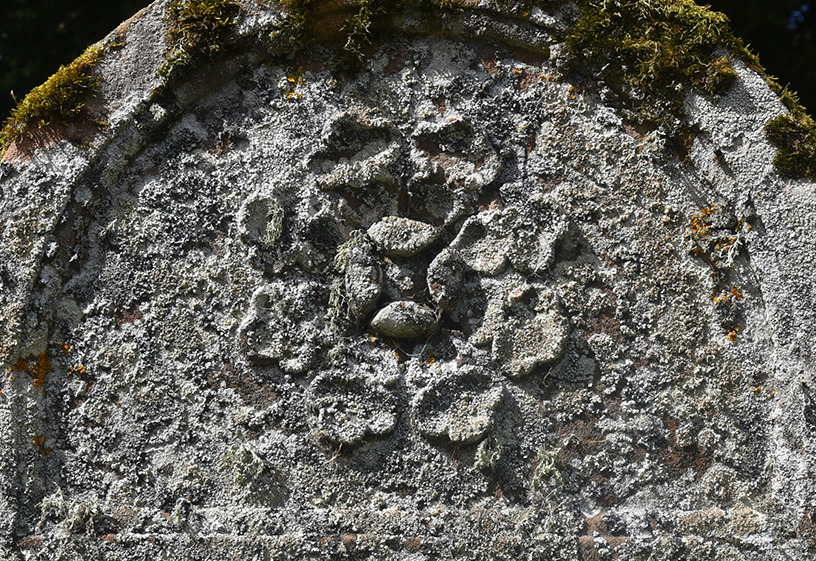 The opening, delicate flower on the Munro headstone 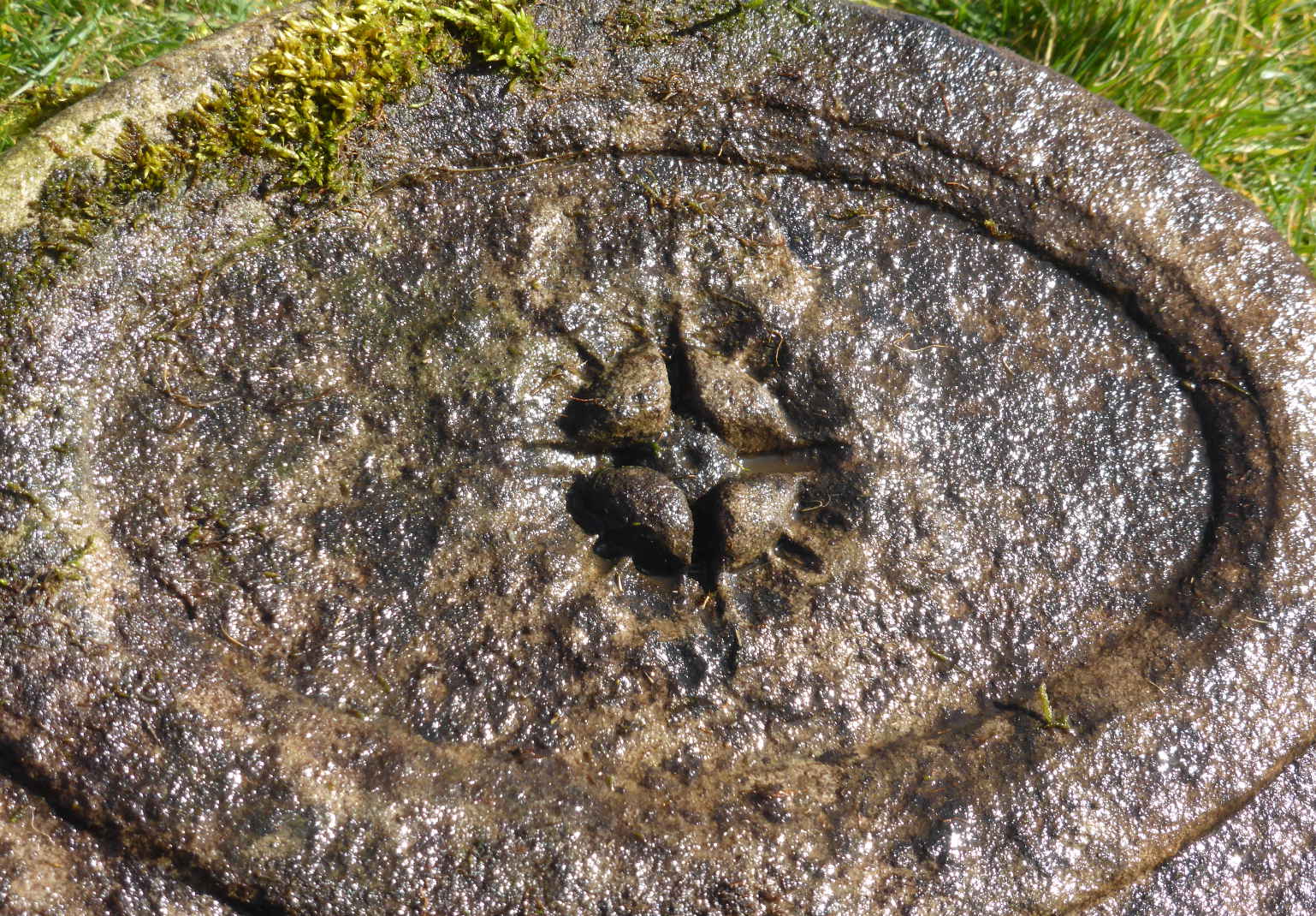 and the opening, delicate flower on the Falconer stone; photo by Davine Sutherland

The Falconers came from Crowhall, in the parish of Dyke, in Moray to take up the tenancy of Ballicherry. What a coincidence that we should have two similar headstones erected by Ballicherry farmers who had come round from the other side of the Firth.