Kirkmichael, the Second Jacobite Rebellion of 1745 and the Wardlaw Mausoleum

text: Jim Mackay   photography as given for individual photographs

This is the story of how the Second Jacobite Rebellion, known as the ‘45, played out in Resolis, the lairds sympathies and connections with the Wardlaw Mausoleum at Kirkhill, near Beauly, with whom we have a close association.

The uprising was viewed very differently in the parishes like Kirkmichael and Cullicudden than in more truly Highland regions. The social structure of the farmland communities in the Black Isle and Easter Ross contrasted with that found in areas which gave their support to leading rebels such as Lord Lovat and the Earl of Cromartie. 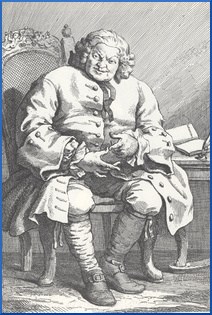 Simon Fraser, Lord Lovat, "The Old Fox", as depicted by William Hogarth. He was the last man to be executed by beheading in Britain (1747) 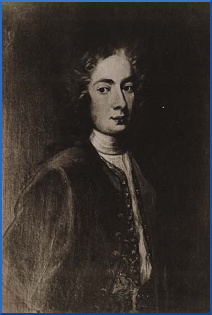 George Mackenzie, the Earl of Cromartie, condemned to be executed, but reprieved due to the exertions of his wife Bonny Bel Gordon and his brother-in-law, Sir John Gordon of Invergordon

In our area we had very much a laird and tenant and subtenant relationship, and any clan associations had long before dissipated. The tenants had merely a financial relationship with the laird or his factor, and if the laird "came out", as the Earl of Cromartie did, his tenants in Easter Ross had no "clan" attachment as an incentive to assist. And they certainly had no financial benefit. The Earl had to look to his tenants on the West Coast, in Coigach, where the clan feeling was still strong (and how poor Coigach suffered for it!) for men to come forward. His tenants in Easter Ross had not the slightest intention of coming out, and, indeed, they all applied for a reward for not supporting the rebellion.

The two estates closest to Kirkmichael at the time of Culloden were occupied by those staunch Hanoverians, the Gordons – Alexander Gordon of Ardoch (nowadays Poyntzfield) and his nephew, Charles Hamilton Gordon of Newhall. They were both sons of Sir William Gordon who had founded and named the town of Invergordon, a short ferry distance from the parish of Resolis in which he owned much land. 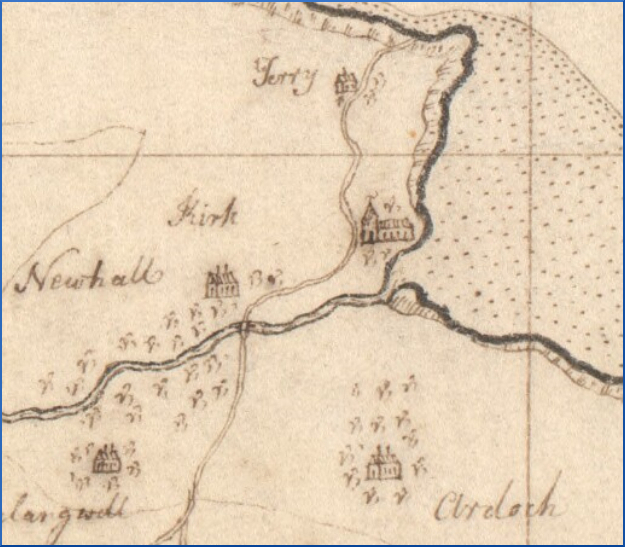 The excellent map of General Wade from 1730, setting out the ferry to Invergordon,
Kirkmichael itself, an active church at the time, Newhall and Ardoch.
The Ferry House is now the private residence of good
friends of Kirkmichael, Charles and Susy Cooper.

Alexander Gordon of Ardoch had previously been Muster Master for the government forces in Scotland, and was active on the Hanoverian side in the first Jacobite rebellion in 1715. His son Adam was a lieutenant in the government forces when he was captured by the rebels in the Battle of Inverurie on 23 December 1745 whilst he was covering the escape of his uncle, Culcairn. He himself later escaped, and his bravery was celebrated at the time. 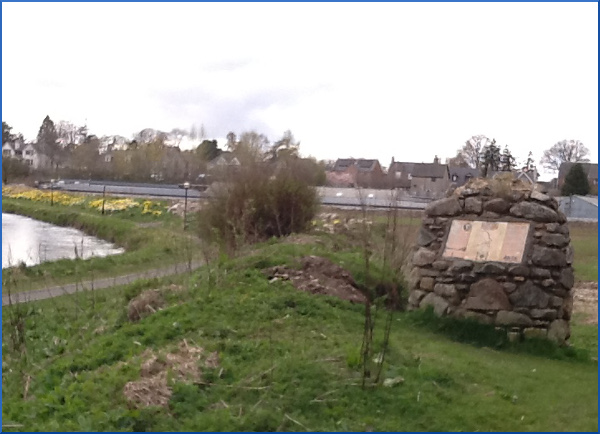 The site of the Battle of Inverurie where Adam Gordon was captured by the Jacobites.
Photograph by old buddy Jonathan Young.

Charles Hamilton Gordon of Newhall, although a Hanoverian, was cleverly hired as part of the crack legal team defending Lord Lovat at his five-day trial for treason in London in 1747. His brother, Sir John Gordon, was privately lamenting to their sister Ann, Lady Arniston, that Charles was also foolishly associating with known Jacobite sympathisers and potentially undoing all the good repute of the family as Hanoverians. The outcome for "the Old Fox" was a foregone conclusion.

Lord Lovat is addressed at the bar:

from the transcript of the trial...

and Charles Hamilton Gordon eases his way into his defence of the indefensible... He was a noted advocate in Edinburgh, but he did spend some time in Resolis as I have the testimony of William Macleay who testified at a trial regarding the rents of Newhall that "he was present and assisted when the preceeding witness Mr. Gorry and the Deceast Mr. Charles Hamilton Gordon himself Accompted with the Tenants and maillers of the Lands and Estates mentioned in the petition for their Rents Cropts 1758 and 1759".

Simon Fraser, in 1747, was the last man in Britain to be publicly beheaded. A visit to Wardlaw Mausoleum in Lovat Territory at Kirkhill is a must, and there you can descend into a spooky cellar below the Mausoleum within which are several lead coffins. There is a dispute as to whether or not Lord Lovat’s body, with or without head, is in one of those lead coffins, but the large one against the wall is reputed to be his. It certainly bears a plaque proclaiming in Latin that he is inside it. The plaque also inveighs against his enemies, including the Mackenzies of Tarbat (back in the 1690s, Cromartie had been on the side of Atholl, seeking to prosecute Lovat over his appalling treatment of Lady Amelia Fraser, m.s. Murray). You can see that the alliance of Cromartie and Lovat in the Rebellion would have been an uneasy one. 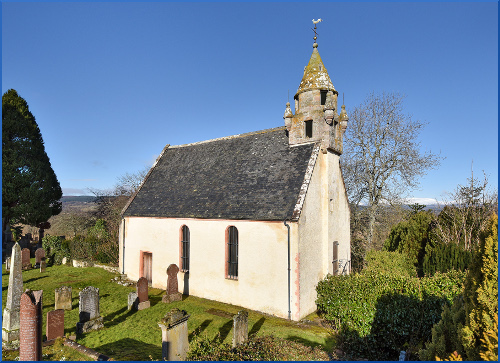 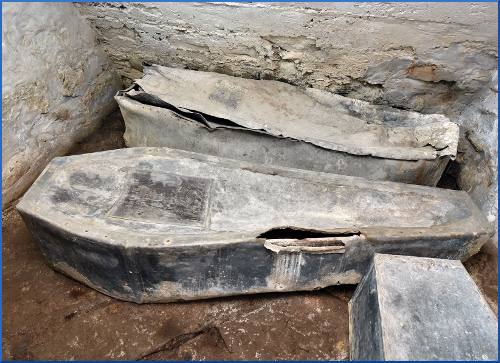 Lead coffins in the cellar at the Wardlaw Mausoleum.
Photograph by Andrew Dowsett.

The Earl of Cromartie, Charles Hamilton Gordon’s brother-in-law, was captured a couple of days before Culloden – he had appeared to "seize" Dunrobin Castle and was having a glass of wine with the sympathetic Countess of Sutherland when he was surprised by the appearance of General Louden with the Government forces, demanding the Earl’s surrender. Allegedly Cromartie hid behind a curtain with the Countess in front, but he left a foot uncovered, and one of the Government officers proclaimed ‘My Lady has three legs!’ The Earl was taken prisoner with his son and the remainder of his troop.

Sir John Gordon of Invergordon, the brother of Charles Hamilton Gordon of Newhall, and brother of "Bonny Bel Gordon" who had married the Earl of Cromartie, had tried his very best to prevent his brother- in-law from joining the rebellion in the first place. He was earnestly supportive of the Hanoverian cause.

Writing from Newhall (which he loved to visit) on 21 September 1745, he proudly wrote: "The accounts brought us by last post, of the intention to raise forthwith, ten independent companies, has produc’d an application to me from my uncle Ardoch and his son". But he despaired of his brother-in-law. On 12 October he wrote pleadingly to the Earl: "I have a regard for your Lordship, for your son, and for the well-being and standing of your family, all which I should be extream sorry to see put upon a throw of the dice ... when I view things impartially, I see nothing, barring of miracles, but ruin, destruction, and death attending the indiscretion".

After Culloden, Sir John ceaselessly worked towards securing a pardon for the Earl. 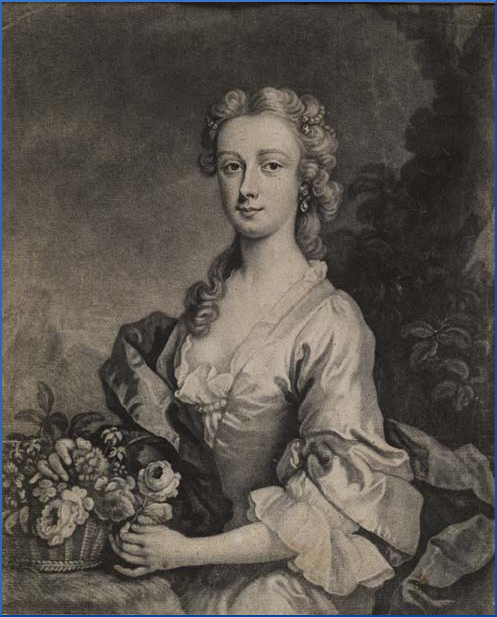 Bonny Bel Gordon, the Countess of Cromarty, and sister of Sir John Gordon of Invergordon. 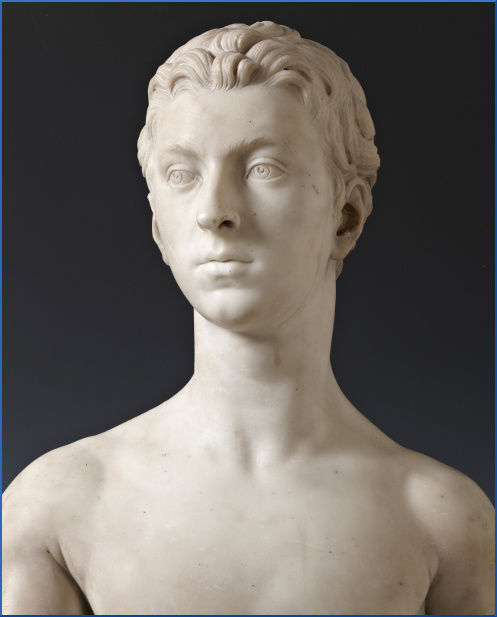 A magnificent 1728 bust of Sir John Gordon of Invergordon, when a young man. Thanks to Highland Council for photograph.

Sir John and Bonny Bel eventually succeeded in having the Earl, who had been condemned to death, reprieved, although his lands and title were forfeited, and he was not allowed to return to Scotland. The pardon was some achievement given the Earl had been in charge of Bonny Prince Charlie’s forces in the North. 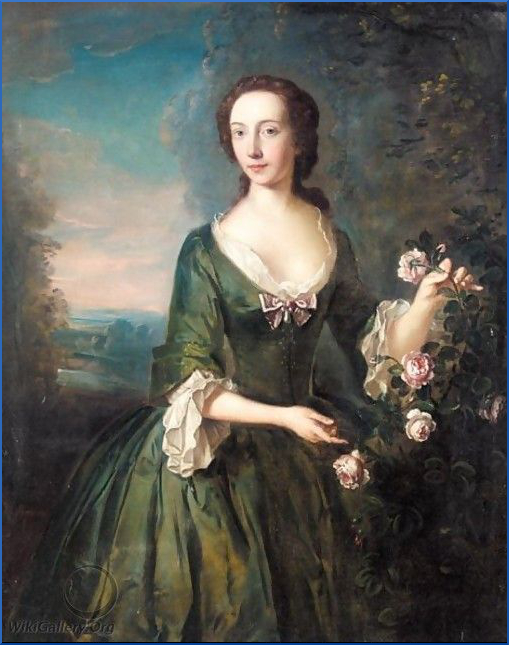 We don’t have a portrait of Charles Hamilton Gordon of Newhall, but this is a portrait by Mercier of his beautiful wife, Helen Cunnyngham.
Source: WikiGallery 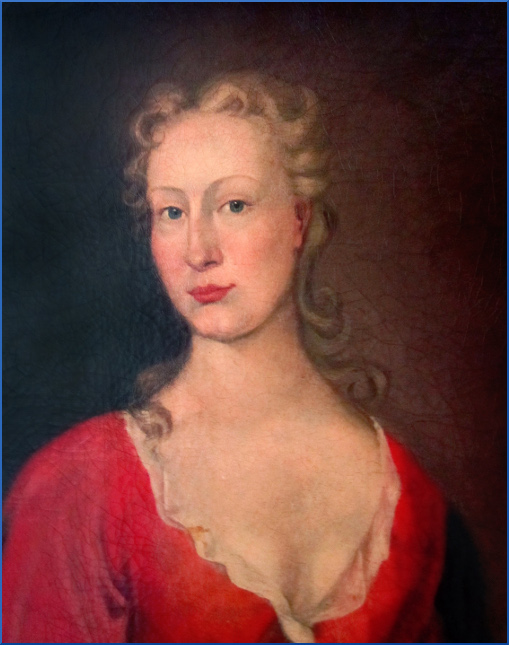 And we don’t have a portrait of Adam Gordon of Ardoch, but this is a portrait of his mother, Anne Munro of the Foulis Munros – the "Lady Ardoch" of our Lady Ardoch Mausoleum at Kirkmichael.
Source, a good friend of Kirkmichael: Hector Munro of Foulis

Kirkmichael is therefore very much associated with the Hanoverian side in the ’45, although clearly just across the Firth the Earl of Cromartie represented a major force for the Jacobites.

We don’t know where all the Gordons are buried at Kirkmichael, but we do have an attractive slate memorial to William Gordon of Newhall. William died at Invergordon Castle, the home of his uncle Sir John Gordon, and was buried in the crypt at Rosskeen. When the Invergordon Estate was sold, his sister Henrietta, by then married to David Urquhart of Braelangwell, was grieved at the thought of him lying in ground no longer belonging to the family. As a surprise for his wife, Urquhart had the remains of her brother exhumed and reburied in Kirkmichael! 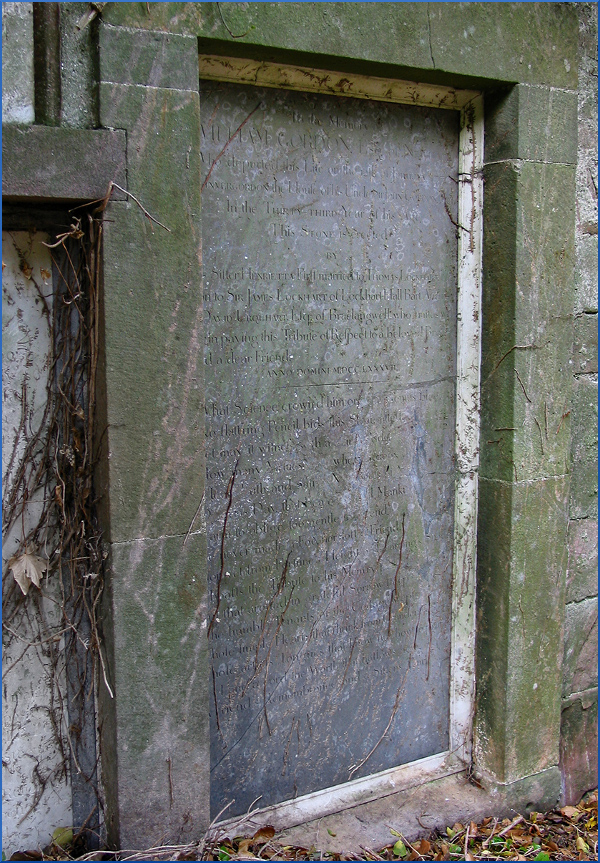 To the memory of / WILLIAM GORDON, Esq. of Newhall, / who departed this life on the 12th of January 1778, / at Invergordon the House of his Uncle Sir JOHN GORDON Bart: / in the thirty-third year of his age. / This stone is erected / by / his sister HENRIETTA first married to THOMAS LOCKHART, Esq: / son to Sir JAMES LOCKHART of Lockhart-Hall Bart and now / to DAVID URQUHART, Esq: of Braelangwell, who unites with / her in paying this tribute of respect to a beloved brother: / and a dear friend: / Anno Domini MDCC.LXXXVII.

What Science crown’d him, or what Genius blest,
No flatt’ring Pencil bids this Stone attest,
Yet may it witness with a purer Pride,
How many Virtues sank when Gordon dyed.
Clear Truth and native nobleness of Mind,
Open as Day, that beam’d on all Mankind;
Warm to oblige, too gentle to offend,
He never made a Foe, nor lost a Friend,
Nor yet from Fortune’s Height or Learning’s Shade,
It boasts the Tribute to his Mem’ry paid;
But that around, in grateful Sorrow steep’d
The humble Tenants of the Cottage wept;
Those simple Hearts that shrink from Grandeur’s Blaze,
Those artless Tongues that know not how to praise,
Feel and record the Worth that hallows here,
A Friend’s Remembrance, and a Sister’s Tear

The poem is by William Gordon’s friend Henry Mackenzie, the renowned author of early Scottish novel &quotThe Man of Feeling&quot.

William Gordon of Newhall thus had uncles fighting on both sides of the ’45. And his father, an uncle and an aunt were all engaged in protecting two most prominent rebels from the fall-out of the unsuccessful rebellion.