The Maciver and Rankin family of Ferryton – and Ottawa

The small ruined cottage you pass, just to the north of the main road at Ferryton, once was home to the burgeoning family of crofter Roderick Maciver and his wife Christina "Cursty" Maclennan, and has a surprising, strong Canadian connection. The gravestone of their son, Duncan Maciver, and his wife, Margaret Rankin, and their daughter, Margaret Ellen or Margaret Helen, stands in the shade of a tree by the north wall of Kirkmichael. The croft at Ferryton curiously had its moment of fame in the House of Commons.

Roderick and Cursty married in Strathconon back in 1828, and their first child, son Duncan, was baptised at Milton, well up Strathconon, on 10 June 1830. The family moved to Resolis in the 1830s. We know this as they had one child in 1837 when Roderick was working as a shepherd in Wood of Brae. Another couple of children followed in 1841 and 1844, when he was a farm labourer at Burnside. It is at Burnside where the family are recorded in the 1841 Census, with four young children, including 10 year old Duncan.

By 1851 the family had moved to their long-time location at Ferryton, although by now Duncan was a farm servant, living in the household of farmer Alexander Ross in Newmills. However, his parents and the four youngest children were well established at Ferryton, his father Roderick being recorded as a crofter of three acres.

Duncan moved back in with his parents in Ferryton as they gained more land (recorded as 6 acres in 1861 and 7 acres in 1871). His parents were now elderly, his father recorded as 60 in 1861 and his mother as 58, so presumably he would have been helping more on the land. His sister Christina left Ferryton in 1869 when she married Newhall ploughman Donald Bisset.

By the 1871 Census, indicating why in family history you should never rely on a single source, his father was miraculously still 60 while his mother had aged two years and was now 60 as well. Poor Duncan had aged more rapidly, gaining six years over the decade.

But clearly Duncan was looking far afield from Ferryton: he had been attracted by prospects in Canada.

This was by now some time past the excesses of the dreadful period of Canadian emigration when the poor colonists, beguiled by rosy pictures painted in the press, were virtually abandoned by unscrupulous agents in an unfamiliar country with no seed or tools for cultivation, totally unprepared for the severity of Canadian winters. It has been suggested that the correspondence of emigrants was censored so that true information on conditions would not find its way back to the home communities (a famous anecdote is of one family who sent a letter urging the rest of the family to come out, including Uncle Sandy – given that Uncle Sandy had been buried many years, the family took the hint that all was not as it seemed).

It may be our Duncan Maciver who is the 36 year old unmarried ploughman recorded as arriving in Quebec on 25 June 1872 on an emigrant ship from Glasgow. If that was he, then we do not know his movements in Canada thereafter, until he turns up as a labourer in Ottawa, marrying another Scot on 21 August 1878. He gave his birthplace as Ferryton rather than Strathconon, and knocked 10 years off his age – after all, his parents had done the same – to say he was merely 38. Margaret Rankin, his bride, was 28 years old, and had been born in Galashiels to William Rankin, a weaver, and Margaret Gray.

Their first child, Margaret Ellen, was born on 22 June 1879, Margaret Rankin, who registered the child, giving their address as Rochesterville, Nepean (now part of the modern city of Ottawa). That was also their address when Duncan registered their next child, Christina, born on 2 December 1881. The Canadian Census of 1881 shows Duncan as a labourer, with him at least giving a consistent story with his age of "41". 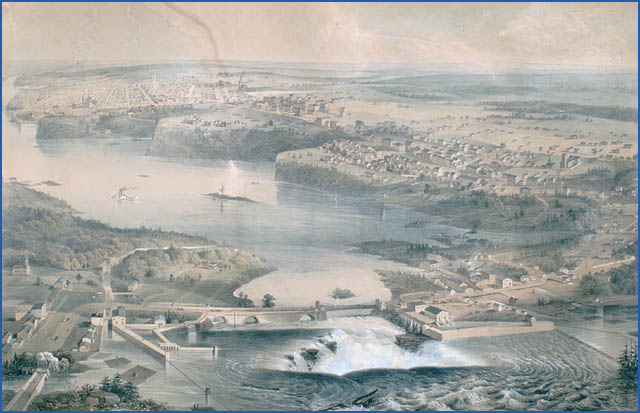 Back in Ferryton, Duncan’s parents had both died, Roderick on 10 December 1878 (his death certificate revealing that his parents had been Duncan McIver meal-miller and Isabella McKay), and Christina on 20 January 1881 (her death certificate revealing that her parents had been William McLennan farmer and Margaret Matheson). The informant in both cases was their daughter Margaret who was looking after the croft. In the 1881 Census, she is given as "farmer of 7 acres employing one woman", having been born in Woodside, with a widowed aunt, Catherine Mackay, a visitor. They were both recorded as Gaelic speakers.

In Canada Duncan must have been feeling the strings of his homeland tugging mighty strongly, and with his parents deceased and only his sister in charge of the croft, he was soon drawn back to Ferryton.

We know that they had returned in the early 1880s, as 1-day-old daughter Helen died on 12 April 1884 at Ferryton. This was not to be the only infant mortality: 2-year-old Catherine Ann died on 29 November 1895.

However, there were several other children born in the little cottage: Roderick on 3 August 1885, Isabella Jane on 25 August 1887, and Williamina on 27 June 1890. On birth certificates, the place and marriage date of the parents was also recorded, and curiously the family consistently gave Ottawa 21 August 1879 when the marriage occurred in 1880, indicating again the unreliability of records.

By 1891, the little cottage in Ferryton ("3 rooms with one or more windows") was well-filled, with Duncan and Margaret, five children, and Duncan’s sister Isabella in residence. However, the children soon began to spread their wings and in 1901 there were only the parents and the three youngest children left.

Duncan had been falling behind on the rent paid for his croft, and the Newhall Estate had been pursuing his eviction. This was at the time that crofters' rights were a political issue, and his case (albeit with his name morphing from Duncan to Donald) surprisingly became the subject of a question in the House of Commons! The Ross-shire Journal of 26 April 1895 reported:

Eviction of a Crofter at Resolis. – In the House of Commons on Tuesday, Mr Weir asked the Secretary for Scotland whether his attention had been called to the fact that Charles Hodson Shaw Mackenzie of Newhall House, had obtained a warrant for the eviction of Donald Maciver, a crofter on Mr Mackenzie's estate at Ferrytown, Balblair; that Donald Maciver was a tenant holding under a lease which expired in 1890, and since that time had been a yearly tenant at a rental of £4 4s, and that no arrears of rent were due; and whether any steps could be taken to prevent this and similar evictions in the crofting counties pending the passing into law of the Crofters' Act Amendment Bill? Sir George Trevelyan – I understand Mr Donald Maciver's father, Roderick Maciver, held the croft at Ferrytown, Balblair, from 1871, or earlier, till 1882, when he died, that Donald Maciver took up the holding in 1884, on his return from America, and occupied it under a lease which expired in 1890, since which time he had neither renewed it nor paid his rent, and is now three years in arrears, in consequence of which legal proceedings have been take. I do not contemplate taking any steps of the nature referred to by the hon. member pending the passing of the Crofters' Act (1886) Amendment Bill.

Somehow the family held on at Ferryton, despite their unpaid rent. Duncan died on 23 January 1911, a few months before the 1911 Census, and the Cottage was occupied now by only widow Margaret and children Roderick and Mina (Williamina).

And now, a curiosity. At some point daughter Christina, who had been born in Ottawa, but had been living at Ferryton, returned to Canada. On 19 March 1927, she married a widowed 41-year-old farmer in Ontario, one Lawrence Henry Chapman. She was a 39-year-old nurse at the time, but what the story is behind her return to Canada I know not, but it certainly strengthens the Canadian associations of that little crofthouse at Ferryton.

Less surprisingly, daughter Williamina married Invergordon sawmiller James Russell Hogg here in Resolis in 1915, and son Roderick, who had continued with the croft in Ferryton, married Christina Cameron in Ferintosh (Urquhart parish) in 1921. He was to move to that parish himself, residing for many years at Balnabeen, although they are both buried in the modern section of Kirkmichael and are commemorated there.

Remarkably, a photograph of the wedding in 1915 between James Russell Hogg and Williamina Maciver has survived, and several of the attendees have been definitely identified.

Duncan Maciver and Margaret Rankin are commemorated by the smart memorial by the north wall in Kirkmichael. But what of the original couple who moved into Resolis from Strathconon, Roderick Maciver and Christina Maclennan? We have to assume that they are one of the many couples buried at Kirkmichael who are not now commemorated by a gravestone at all. 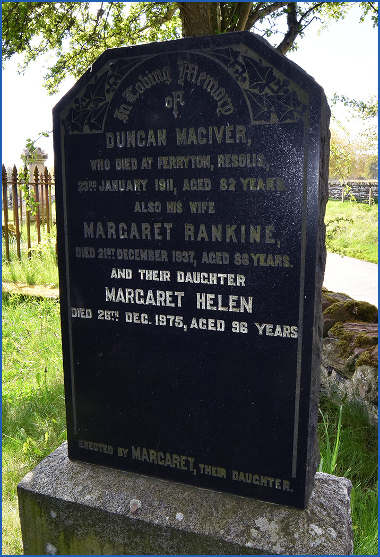