Our national poet, Robert Burns, and Kirkmichael in the Black Isle

This is the story of one connection between Robert Burns and Kirkmichael.

As well as being a poetic genius, Robert was a great lover, or an irresponsible rake, depending how you view it. He fathered at least 12 children with four mothers. However he had one true, or at least one long-term, love of his life: Jean Armour. She it was whom he married, she it was who had nine of his children, she it was who inspired some of his greatest songs.

Jean Armour was the second oldest daughter of James Armour, a stone mason, and his spouse, Mary Smith, and the family lived in Mauchline, Ayrshire. They had 11 children in all. One of Robert’s early poems singles her out:

The Belles of Mauchline

In Mauchline there dwells six proper young belles,
The pride of the place and its neighbourhood a’;
Their carriage and dress, a stranger would guess,
In Lon’on or Paris, they’d gotten it a’.
Miss Miller is fine, Miss Markland’s divine,
Miss Smith she has wit, and Miss Betty is braw:
There’s beauty and fortune to get wi’ Miss Morton,
But Armour’s the jewel for me o’ them a’.

She was clearly a devoted wife, putting up with the affairs of Burns and even taking in one of his illegitimate children. The only portrait to be painted of her was by Gilfillan in 1822, when she was by now a grandmother.

The financial plight of the widow and her children after the death of her husband drew national interest, and a fund was set up to collect for her and her family. The popularity of Burns continued to increase, and his body was removed from its simple grave in St Michael’s Kirkyard, Dumfries, to a more distinguished mausoleum, and this is where Jean herself was buried upon her death in 1834. In more recent years, Jean Armour has had statues erected to her in Mauchline (2002) and opposite St Michael’s Kirk in Dumfries (2004). 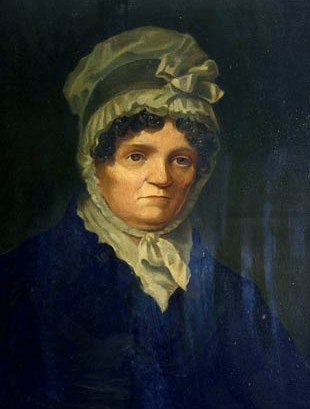 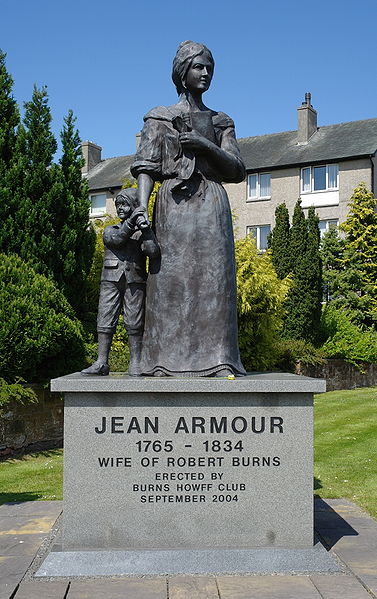 All this is very interesting, I can hear you say, but what does it have to do with Kirkmichael?

The clue comes from a snippet in the Inverness Courier of 12 January 1860, which announced a death:

At Cromarty, on the 5th inst., in the 75th year of her age, Mrs Mary Armour, relict of the late Mr Gilbert Ferguson, Cromarty. She was cousin-german to Burns’s “Bonnie Jean,” and was much esteemed during a residence of fifty-five years in Cromarty.

This family of Fergusons were salted pork entrepreneurs, rearing and slaughtering vast numbers of pigs. Their barrels of cured pork were exported from Cromarty to all corners of the world. George Ross, the Cromarty merchant, was associated in the late 1700s with the development of a hog-yard, a large-scale, intensive pig rearing enterprise unique for its time, and the Fergusons in turn made their living out of pigs. Many of the family were named Gilbert; coincidentally, Robert’s partner in his Mossgiel Farm was his brother Gilbert. I know of four boys born to the first Ferguson in the salted pork business, Donald Ferguson, and his wife, Isabel Hossack.

You can see that the family were fully occupied in the business, rearing and butchering the pigs and even making the barrels the pork would be stored in.

The newspaper of 1860 refers to Mary Armour having been resident in Cromarty 55 years, which takes her back to about 1805 for her arrival, aged about 20. She married Gilbert Ferguson in 1809.

Sadly, I don’t see any children to Gilbert and Mary, although she would have been occupied with babies a great deal, as her occupation, according to her death certificate, was a midwife.

The family obviously were proud of the Burns connection. Jean Armour’s father had started to encourage a marriage between Burns and Jean only upon the success of the poet’s first book of poems in 1786. The name of Armour slowly began to attract attention as well. Thus you see Gilbert’s brother John and his wife Margaret Reid naming their daughter in 1827 “Mary Armaur Ferguson” after their sister-in-law.

Did Mary keep up with her first cousin Jean? It would be marvellous if a letter were to emerge.

Young Mary Armour Ferguson moved in early with her uncle Gilbert Ferguson and aunt Mary Armour, and she can be seen in the 1841 Census return in the appropriately named Gilbert Street. On Gilbert’s death, the two Mary Armours continued to reside with each other, and this is the situation seen in the 1851 Census for Cromarty:

Gilbert and the two Mary Armours in 1841, in Gilbert Street

I have to say there is one fly in the ointment for this particular story. When Mary Ferguson ms Armour died, her son Donald informed the registrar that her parents were James Armour and Mary Armour ms Brown. But Bonnie Jean Armour’s father was also James Armour. If they were cousins german how could they have a father with the same name?

Donald also informed the registrar that James Armour’s occupation was a stone-ware merchant, and in the 1851 Census return Mary Armour’s parish of birth was given as the Parish of Old Machar, Aberdeen, so there are some clues there for the family origins and movements to be traced. It seems a long distance from Mauchline, Ayrshire, but nevertheless there must be something to the story.

And the Kirkmichael connection? Mary Armour herself was buried in the Gaelic Churchyard in Cromarty. But the successful Ferguson family extended beyond the parish of Cromarty, and Gilbert, the son of James Ferguson, master cooper and butcher, who had previously been tenant at Peddieston Farm and then Gordon’s Mill, finally took up the farm of Kirkton, right beside the churchyard of Kirkmichael.

He was known as “Gilbert the Pig” because of his own extensive pig enterprises. On his death in 1882, the family erected a handsome granite edifice, topped with a draped urn, on the north wall of the burial ground. It is the closest point within the churchyard to Kirkton. 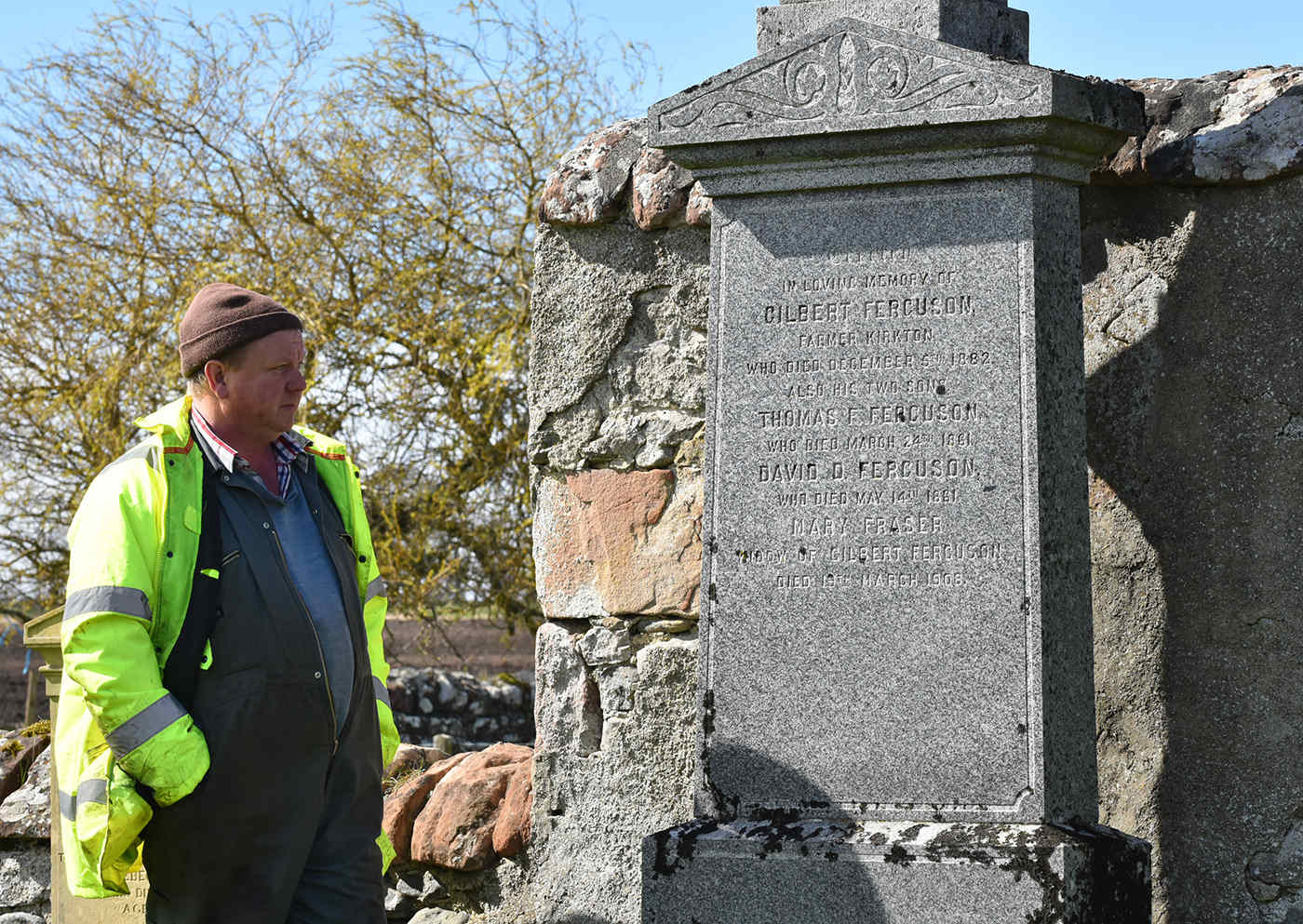 Gilbert’s memorial, with the current farmer of Kirkton, Danny McBean, and with the fields of Kirkton behind; photo: Verity Walker

Gilbert’s aunt was thus Mary Armour, first cousin of “Bonny Jean”, about whom, and his courtship of her, Burns wrote at length, commencing with:

There was a lass, and she was fair,
At kirk or market to be seen;
When a' our fairest maids were met,
The fairest maid was bonie Jean.