The Sequestration of Alexander Munro (1824–1898), quarrier at Cullicudden Quarry and farmer

Alexander took up the tenancy of Cullicudden Quarry about the year 1857, so he had been established in the area for a reasonable period and knew what he was taking on. Whilst he continued as a crofter in Resolis for the remainder of his life, the quarry enterprise was a ruinous episode. He became bankrupt in 1862, and his court statement was a catalogue of disasters. His father had died a couple of years before he entered into the enterprise (Donald Munro died in Urquhart in 1855 and is buried in the obscure Logie graveyard near Conon). I therefore wonder if the family of his wife, Helen Corbet, put up some of the necessary backing. Certainly, on his bankruptcy, the main sums owing were to Donald Corbett and Kenneth Corbett, Helen’s brothers. 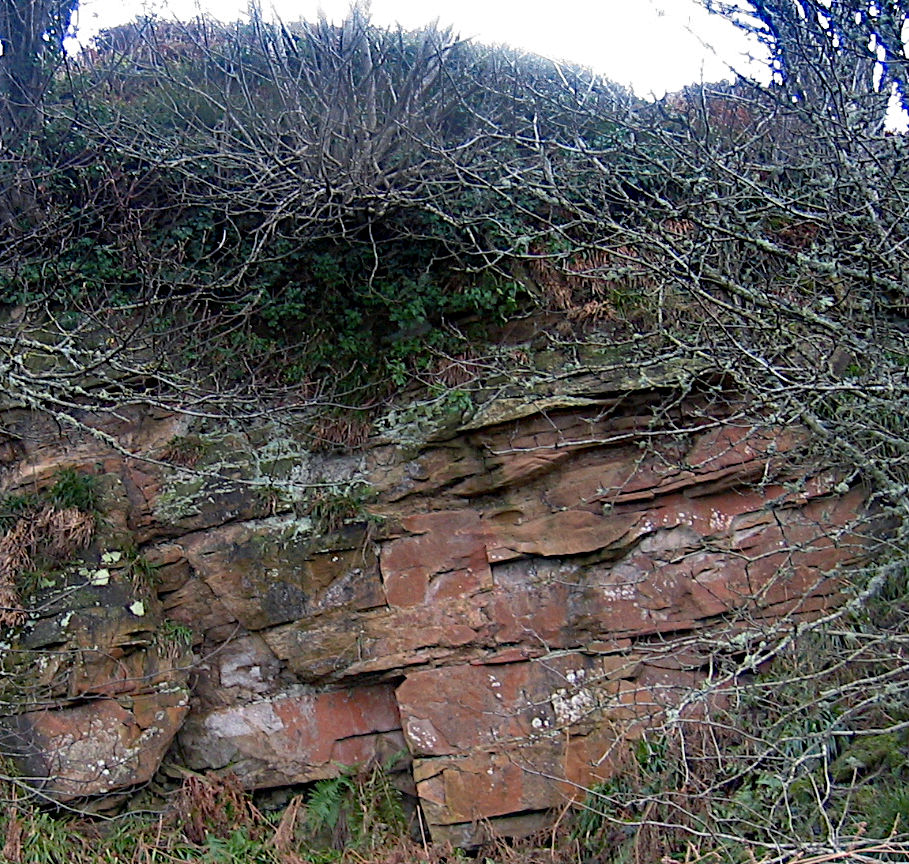 One of the now overgrown quarries at Cullicudden; photo by Jim Mackay 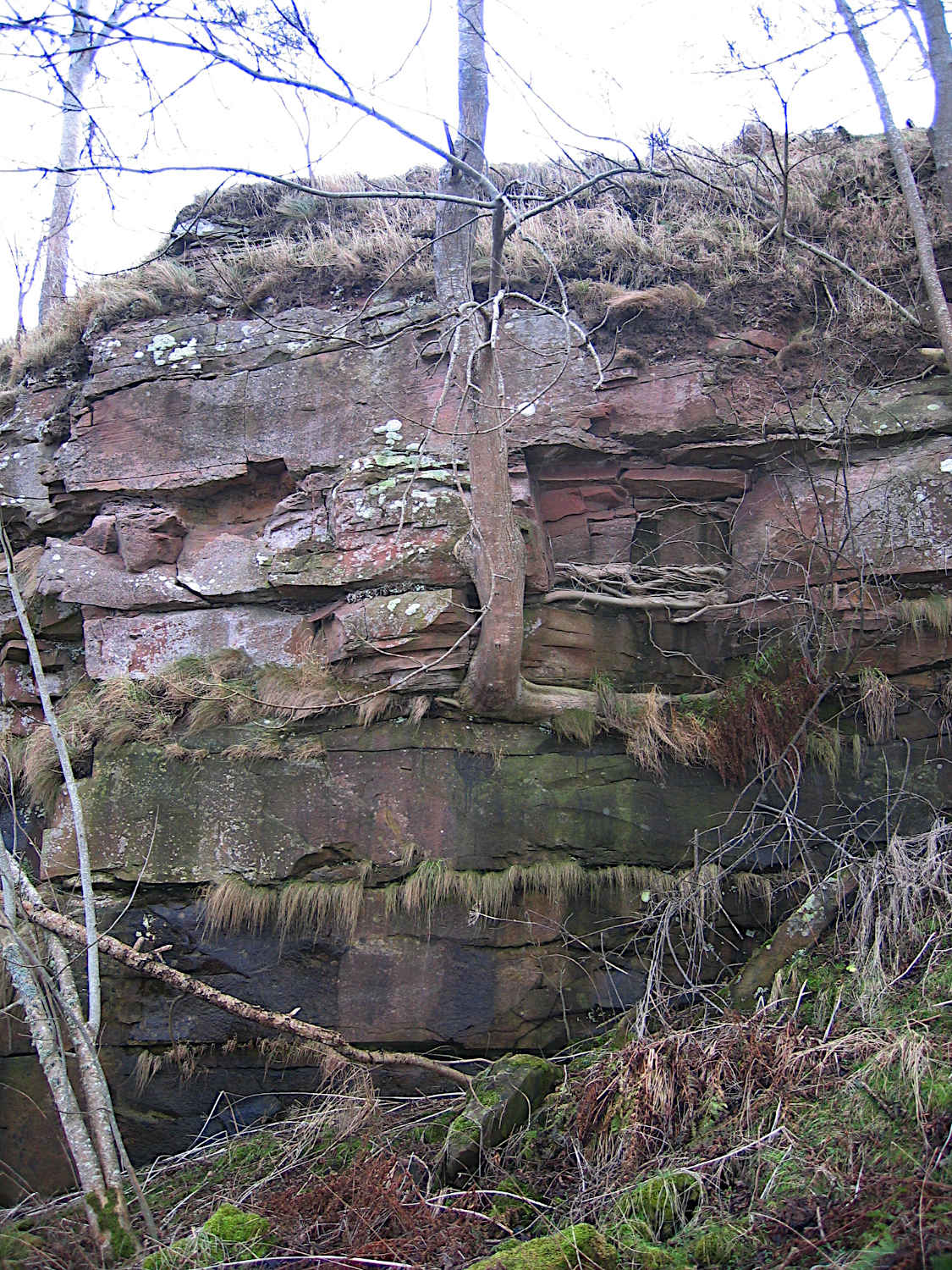 Another quarry at Cullicudden, more to the east; photo by Jim Mackay

The Valuation Rolls show (in the first accessible) that initially he was in occupancy of the Quarry jointly with William Forbes.

The 1860 Valuation Roll contains the identical entry, as does the 1861 entry but with one exception – the name William Forbes has been stroked out. Alexander Munro had taken over the whole responsibility for the quarry. In that year, his home in Cullicudden (which I think even at this time is the property later to be known as Ardmeanach or St Teilo’s) shows evidence of his quarrying activity, with two lodgers, one a stone quarrier and one a boat carpenter:

The national papers all contained the details of the sequestration process as was normal in those days; there was no place to hide. And in the National Archives in Edinburgh (under CS318/7/200) there is a collection of documents relating to the Sequestration of Alexander Munro Contractor & Quarrier at Cullicudden 1862. The examination of the bankrupt Alexander Munro took place as advertised on 6 November 1862 in Cromarty Court Room, and this is his statement.

Compeared also the Bankrupt Alexander Munro who being solemnly sworn and interrogated Depones as follows, I took the Quarry at Cullicudden about five years ago. I expended a good deal of money in working the Quarry. I spent Thirty pounds at least. It was not a paying concern. In October Eighteen hundred and sixty one I took a Contract for a Railway Cutting at Grantown in Strathspey. A Person named Peter Boyle had a share, in that Contract. Boyle took up about Sixty two pounds of our money without my knowledge and left the country, and I had to meet the men’s wages myself. I had to sell a Crane for Eighteen pounds which had cost us Twenty six pounds to meet the men’s claims. I lost about Thirty pounds through the Wreck of a Lighter I employed in carrying stones from the Quarry in July last. I account for my present deficiency in consequence of these and other losses. I made up a state of my affairs which was produced at last meeting of my Creditors. That State of Affairs which is now shown me is correct and the same is docquetted by the Sheriff Substitute and me as relative hereto – All which I depone to be truth. 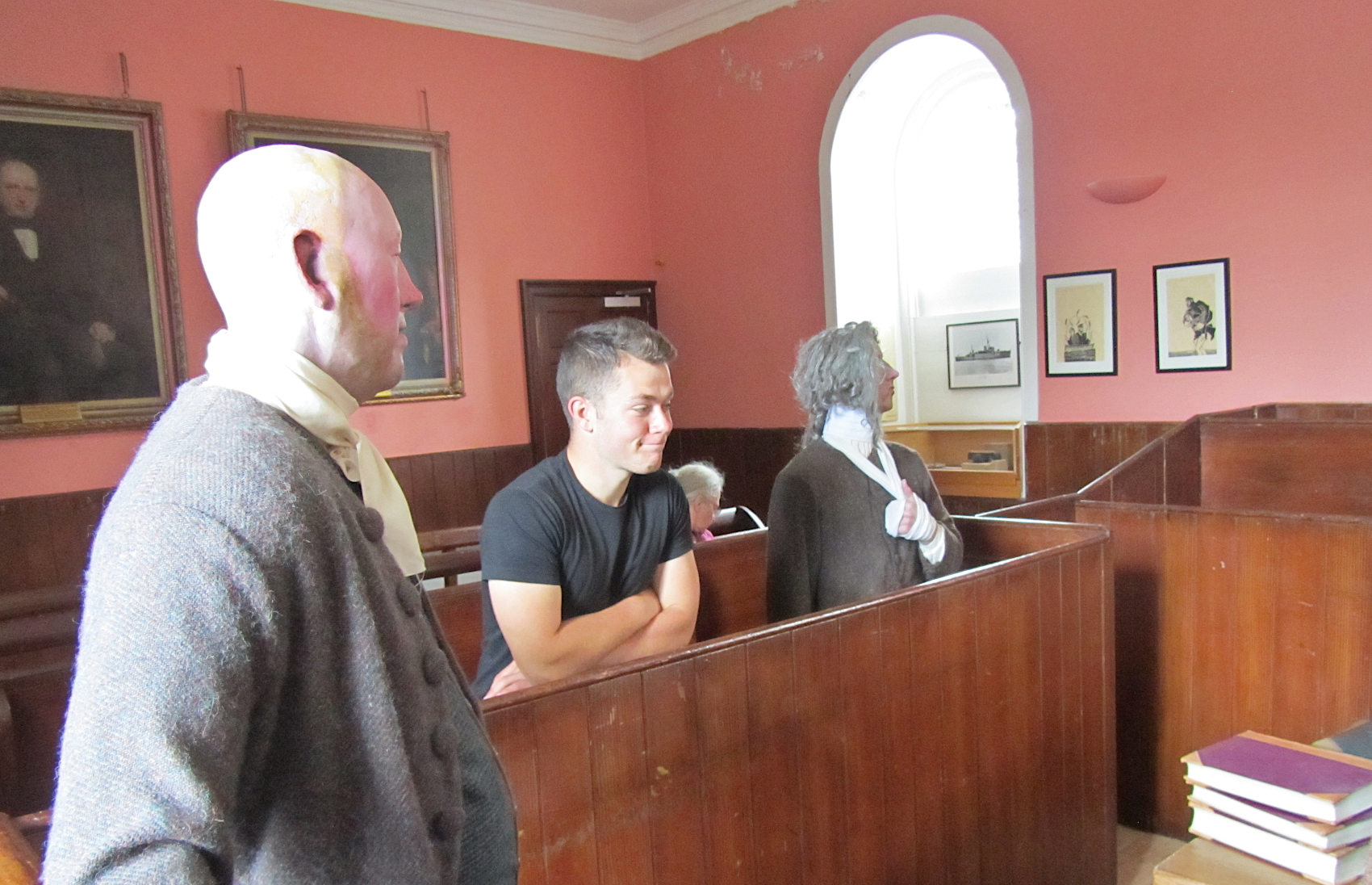 Cromarty Court room, where the sequestration of Alexander Munro played out; photo by Jim Mackay

Well, between embezzlement by a business partner and his ship sinking and his having to sell equipment at a loss it was inevitable that poor Alexander had to declare himself bankrupt. I note that in the Register of Deeds in the Cromarty Sheriff Court there is a bond of caution dated 4 December 1862 by one Donald Corbett, quarrier, Cullicudden, Trustee on the sequestrated estates of Alexander Munro, contractor and quarrier Cullicudden. Donald Corbett was Alexander’s brother-in-law, and I imagine he was regretting getting involved in the business.

The valuation of assets carried out for the sequestration combined Alexander’s equipment at the Quarry and on his croft, and the value added up to the substantial sum of £77:

But that £77 would not go far in addressing the substantial debts Alexander owed his workers and those who had supplied goods and services to the business. You can see how closely involved the Forbes family was with the quarry from the list of debtors and it is no surprise that going forward it was the Forbes family who took it over.

And finally, let us look at the detailed inventory and valuation of the quarry tools. They seem to be a surprisingly limited set, but we already know that some kit had been sold off earlier to keep the business afloat. The two cranes are the most substantial pieces of quarry equipment. The wedges were essential for the quarryman – a rock of any size can be split by a row of wedges (with feathers if the rock is larger), each wedge close to the next one, and knocked in along the row, one tap to each wedge in rotation. At some point the rock splits along the desired line. Tiny packages of dynamite in a row of drilled holes was used later, following exactly the same principle. The cranes were used to swing the blocks clear of the working face, and to load the vessels carrying the block away. 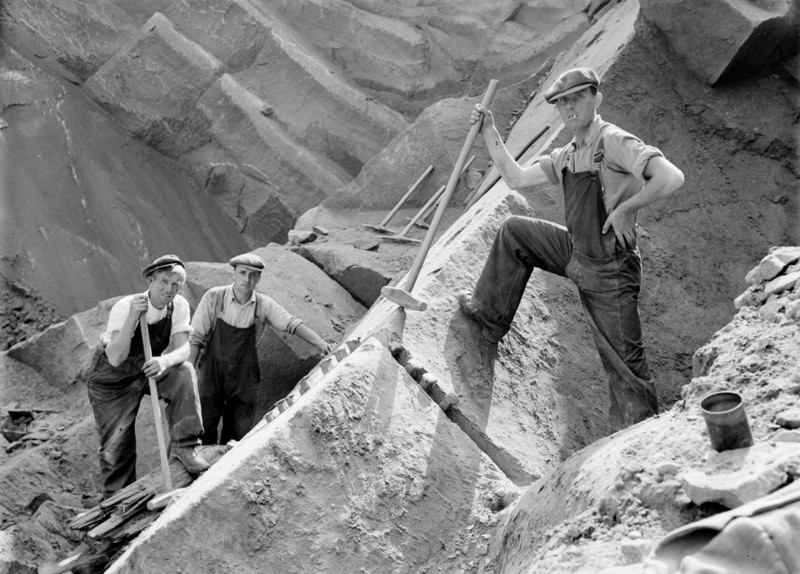 A sandstone block in a quarry being cut to the desired size by tapping a row of wedges in sequence until it splits; image courtesy of the British Geological Society

The Household Furniture was also very limited. The Trustee (Daniel Ross Merchant in Jemimaville) assessed the whole Assets to amount to £58.6.6.

From this sum there falls to be deducted the following preferable Debts
1stRent of Quarry £13.5.-
2nd. Wages due Workmen £11.-.-

This left Divisible Assets of £34.1.6. Alexander Munro was finally discharged on 4 December 1862, presumably determined never to go near a quarry again. Bankruptcy would have been a major setback for any man. However, he rallied and, presumably with assistance from family, continued crofting and actually increased the size of his tenancy. By the 1871 Census Alexander Munro held a croft of 24 acres, 15 of which were arable, in Cullicudden. His house had four windowed rooms. He was buoyant once more.

His son Alexander was shortly to depart for Trinidad to be the manager of an estate there. I have no idea how this came about. He was born in 1856 in Cullicudden, but strings must have been pulled to secure his position. At this time the sugar cane estates in the West Indies were finding it tough to compete with the increase in sugar production from European sugar beet so how he was getting on I do not know. It was not to work out for him personally as that dread wasting disease of the time, tuberculosis, known more descriptively as consumption, laid him low. He died back at home in Cullicudden.

Daughter Mary had already passed away:

There must have been pleasure, though, in seeing some of his children marrying and bringing up families of their own. Margaret had married Alexander Bisset, mason in the Whitebog, parish of Cromarty, in 1877. I see in the 1881 census that Margaret and two young children were in residence with the family in Cullicudden, so her husband must have been away.

But alas, Alexander’s wife Helen Corbett was soon to die, and Alexander had to inform the registrar himself:

Nothing daunted, in less than a year he had married again, to a lady very much his junior. He was in fact older than he was letting on as I believe he was 60 not 56 as he claimed:

A year later a further child was born, and I suspect that his new wife Catherine Murray thought there would be no more as they packed in the names:

Thus, in the 1891 Census return we have a completely new family in house with Alexander. From the known location of neighbours their home has to be the house on the north side of the Cullicudden Straight with the giant boulder beside the entrance gate. It has gone through several names over the years, including St Teilo’s and Ardmeanach, but was simply known in my father’s day as “Annie’s House” after Annie Urquhart who lived there. When joiner George Colmer (“CroftCraft”) and family lived there, George obtained permission to build a new house just to the east of the existing crofthouse which would then be demolished. George was renovating my own house and was telling me that he couldn’t bring himself to tear down the old crofthouse so he renovated it, and the two buildings now stand happily side by side. 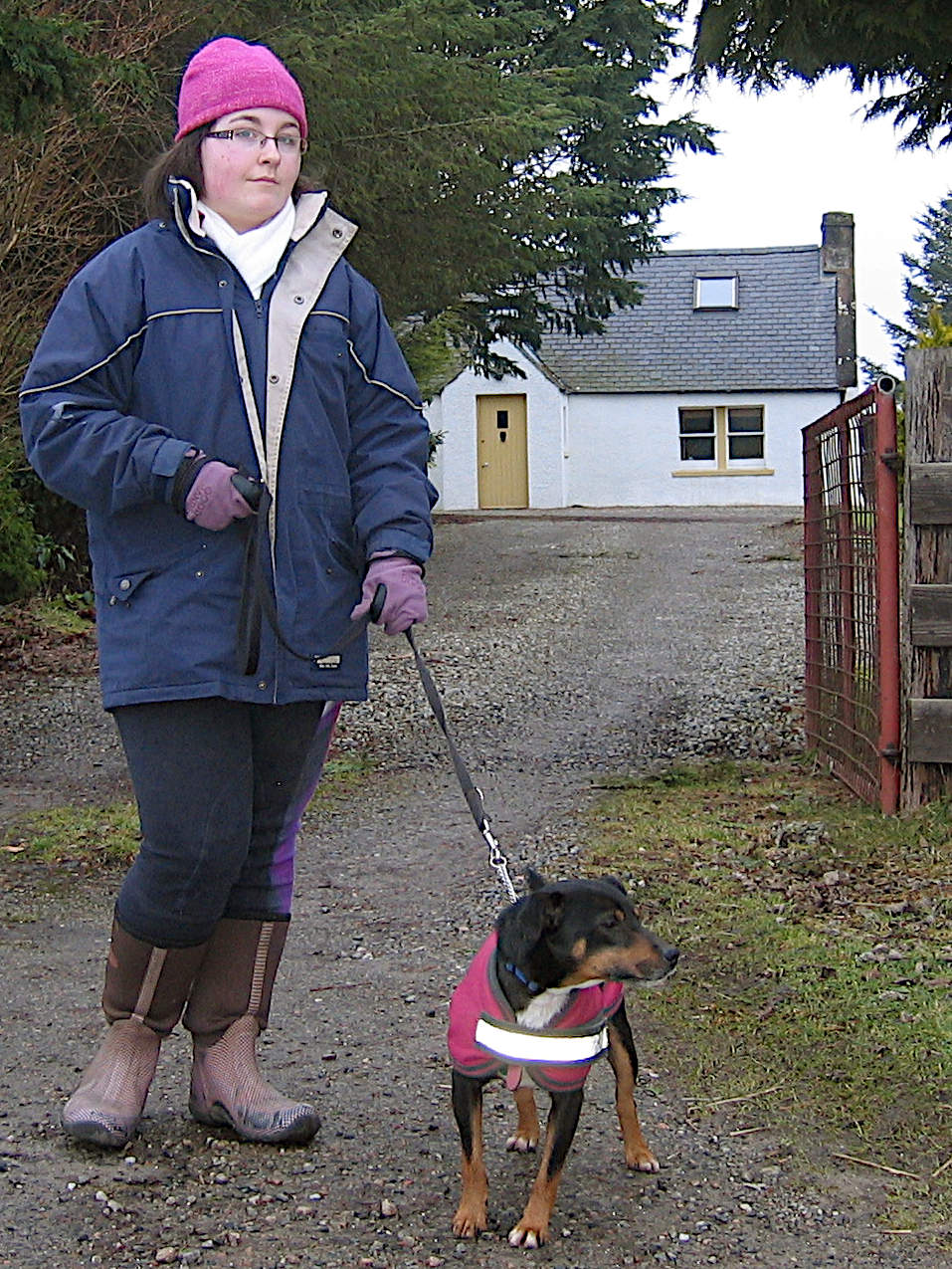 Kirsty, Ben and the former Ardmeanach; photo by Jim Mackay

Alexander now had living with him his new wife, his young son, his new father-in-law, and Georgina, his new stepdaughter. It was all change! Georgina was the result of an indiscretion of her mother Catherine Murray as I see the following in the birth register:

There was a later indiscretion:

The two children were in household with their grandparents in the 1881 census. Georgina would marry ploughman Alexander Graham a few years later, in 1896. Soon afterwards, in 1897, John, who now called himself John Urquhart, would marry Kennethina (Ina) McLennan.

Alexander was still farming, and it was following an accident with a mill that he passed away in 1898. The mill was one of the most dangerous pieces of equipment on the farm and farmers became oblivious to the risks they posed.

You will note that son Donald erroneously gave his grandmother as McLennan when we know from Alexander’s marriage certificate that the name should have been Macdonald. Always seek out multiple sources!

Alexander had already erected a good quality sandstone headstone in Cullicudden graveyard, initially on the death of his daughter Mary, although other names were added to it in time. Astonishingly, his own death was not recorded on it. The headstone reads: 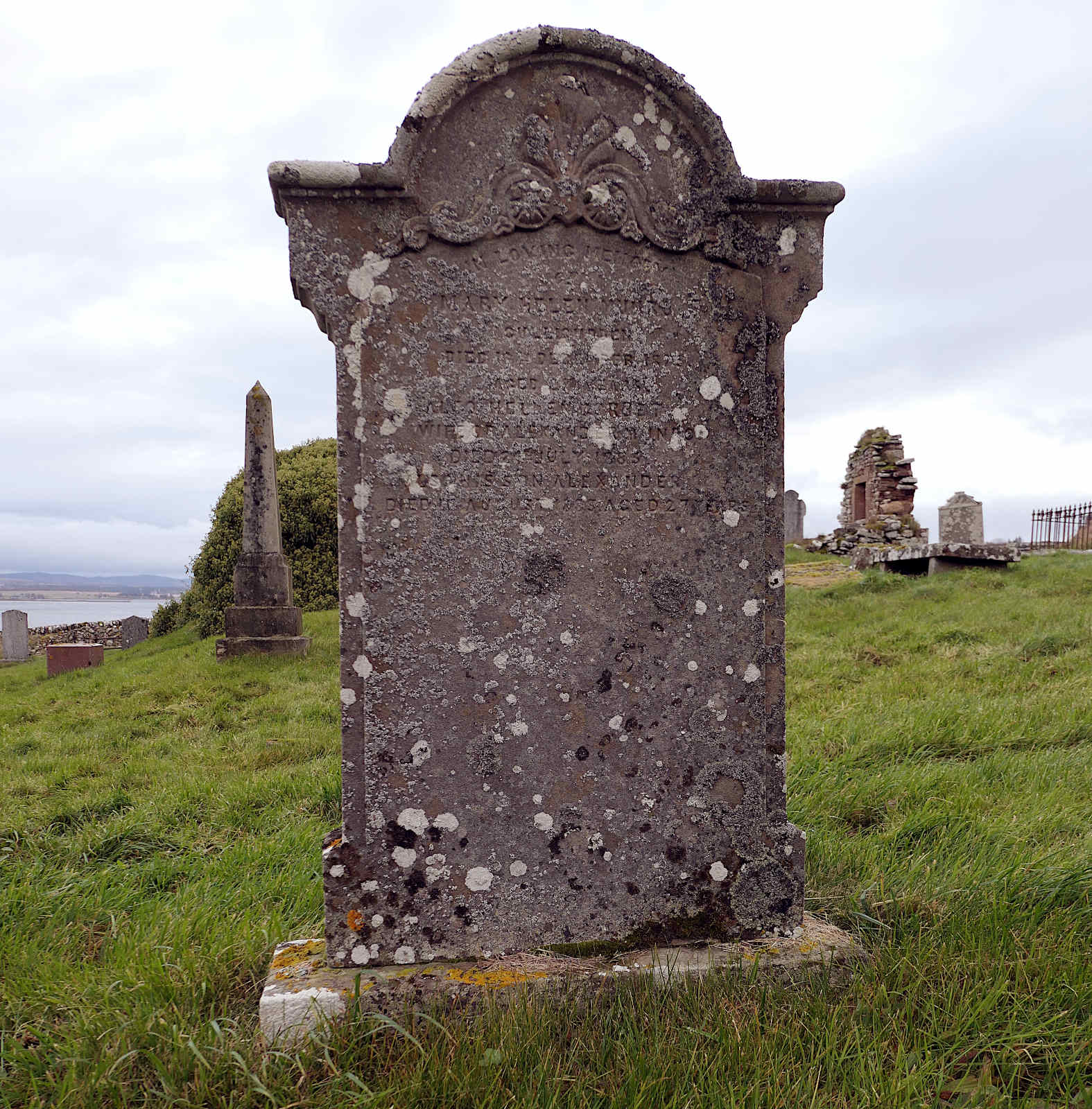 The Munro stone is one of very few in Cullicudden with the inscription on the west face of the stone; photo by Jim Mackay

Catherine continued to reside in the same house on the Cullicudden Straight, where she was joined by the family of her son John Murray, now calling himself John Urquhart.

And here we are getting too close to modern times and hence I will end at this point. My father used to tell me that Annie Urquhart, that three month old baby in this house, which was later to be known as “Annie’s House” after her, used to nurse me! So time to draw this part of the story to a close.