A surprising connection between Kirkmichael and the remote Atlantic island
text: Jim Mackay photography: as given

On 29th August 1930, the last 36 inhabitants of St Kilda were evacuated. Three of them are buried at Kirkmichael. This is their story. 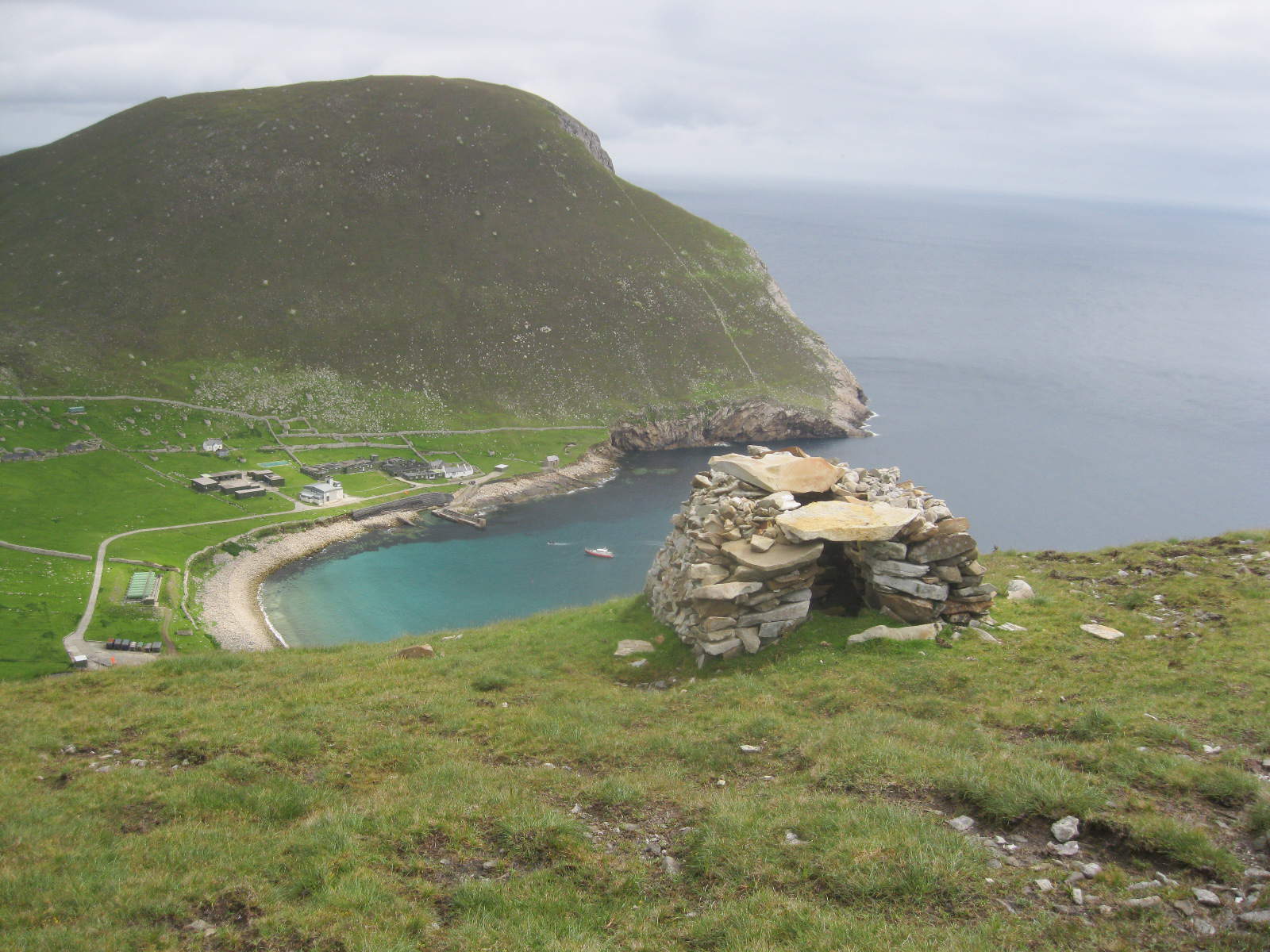 Norman Mackinnon and his wife Annie Gillies lived in No. 1 Main Street, that staggered curve of stone houses built well up from the beach at St Kilda. Their family, five sons and three daughters, was the largest still present on St Kilda. Finlay Gillies, Annie's father, and at that time the oldest resident of St Kilda, lived a few houses away at No. 7 Main Street with his wife Catherine and other family members. 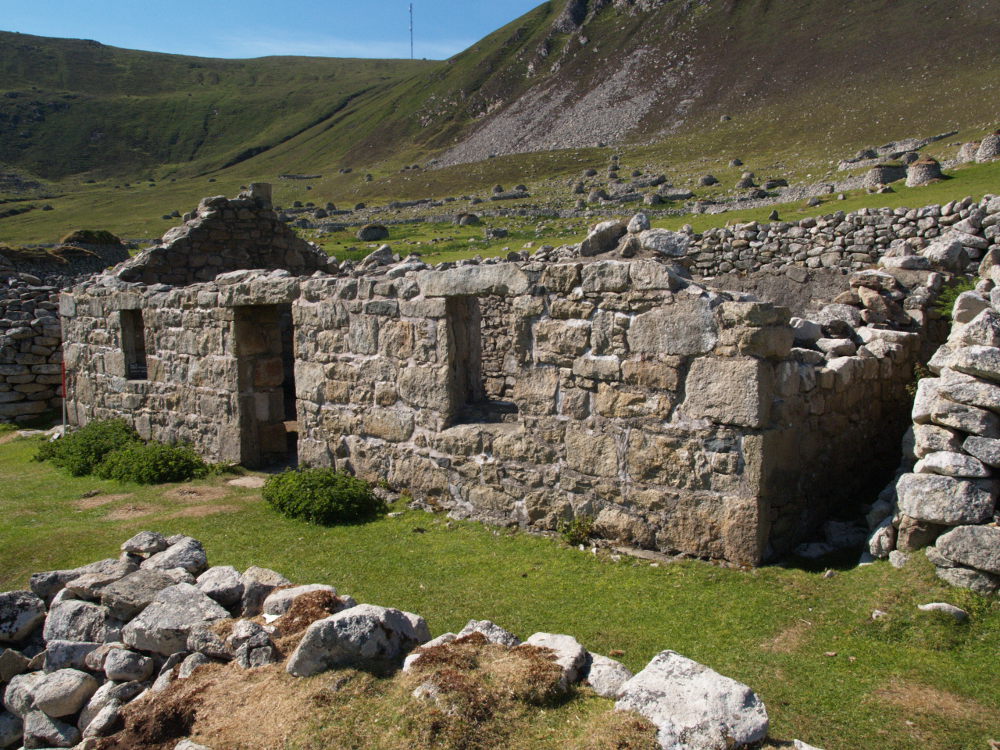 No. 7 Main Street a few years ago. Although it is a ruin, it is a well preserved one.
Photograph courtesy of Craig Stanford, St Kilda Archaeologist, National Trust for Scotland 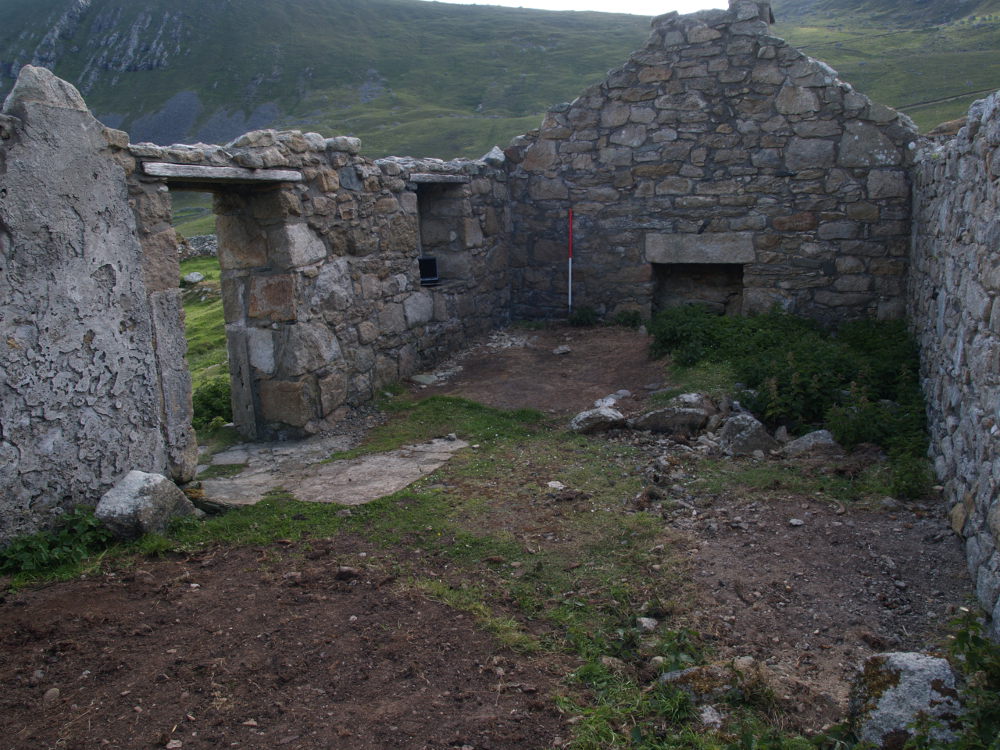 The interior of No. 7. The NTS has been slowly, carefully repointing the mortar across the whole building as part of their works to preserve and protect the village of St Kilda.
Photograph courtesy of Craig Stanford, St Kilda Archaeologist, National Trust for Scotland

The archipelago, 40 miles west of the Outer Hebrides, had been occupied for thousands of years, the inhabitants fishing, raising sheep for wool, gathering eggs and harvesting birds for flesh, oil and feathers. St Kilda and its stacs are home to the world's largest colony of gannets, Britains's most populous colonies of fulmars and puffins, and the birds here form the most important seabird breeding station in north west Europe. The local Soay sheep is the most primitive domesticated animal in Europe, dating unchanged from Neolithic times. 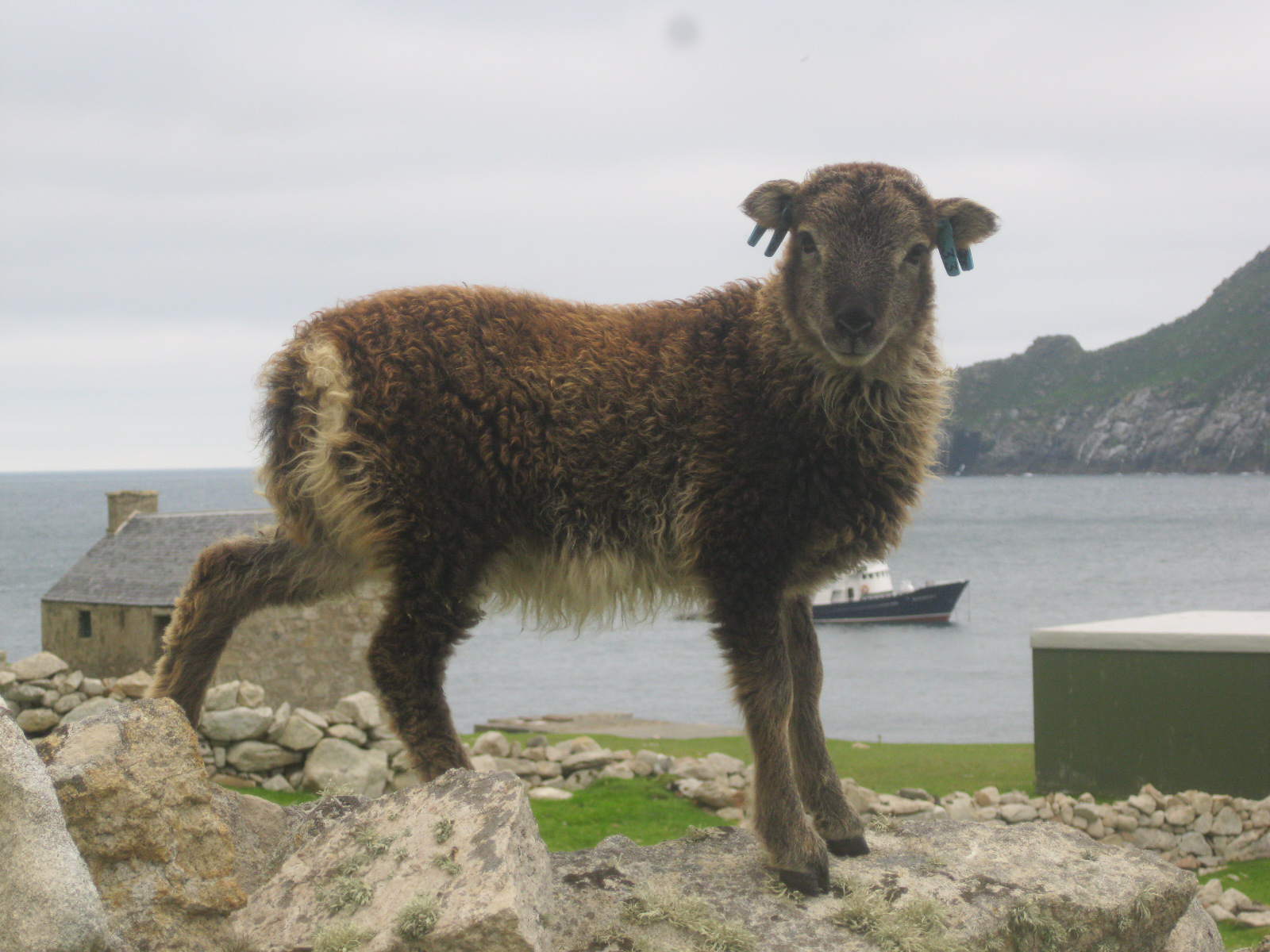 Sheep roamed the populated island of Hirta, kept out of the cultivated area by a long stone dyke above the settlement, but sometimes lost over the cliffs. St Kilda is a precipitous location. The main island of Hirta is walled in part by the highest sea cliff in the British Isles at Conachair (376 metres), while Stac an Armin (191 metres) is the highest sea stac. Most people are familiar with early film of the islanders risking life and limb gathering eggs and birds on the cliffs of St Kilda.

By the time of the evacuation in August 1930 the population of St Kilda, once very numerous, had shrunk to 36 islanders. The previous winter had been a hard one for everybody, and Norman's family had suffered in particular. There had been a long-term drain through emigration, and there were concerns regarding provision of health care given the remoteness from modern health facilities. Recent illnesses and deaths had demoralised the population. In May 1930, many of the islanders petitioned the government for resettlement. Plans were thereupon put into action to evacuate the 36 remaining St Kildans (and their 1,500 sheep), and find new homes and jobs for them.

And so on 30 August the islanders left their homes for the last time. The buildings themselves were of relatively recent origin, being mostly built in the 1860s after a ferocious gale had damaged the previous black houses, which had then been converted to sheds and stores. Existing stores were the many hundreds of small, stone-built "cleits" that dot the main island of Hirta. How did the St Kildans feel, abandoning their previous life in the remotest location within the British Isles? Accounts suggest they were generally excited and looking forward to their new lives, but tearful as reality set in. 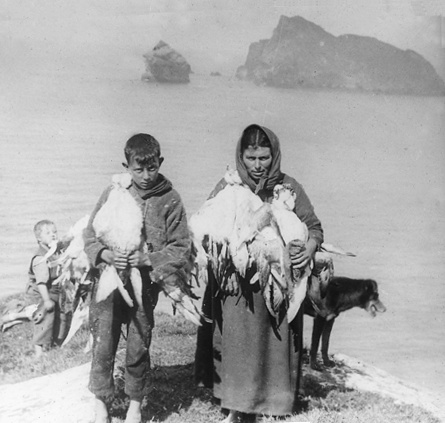 In a Department of Health for Scotland report dated 8th December 1930, the locations of the evacuees were all set out. Norman and Annie and their eight children were living in the parish of Morvern at "Larachbeg, Lochaline, near Oban" whilst Annie's father Finlay was living with his widowed daughter-in-law and her two children at "Savary, Lochaline, near Oban." The houses were owned by the Forestry Commission "for Fiunary Forest". Other families were located elsewhere around Lochaline and at Strome Ferry and Inverness. Jonathan Wordsworth tells me that when he was working at Savary in 1991, he was told by the forester at the time that the St Kildans planted trees on crags and slopes that were unfellable nowadays because of the steepness of the slopes, reflecting the agility of the St Kildans from their seabird cliff-climbing.

A letter in the Scottish Field of 30th December 2015 from a Mrs C.S. Ball, born in Morvern but then living in Alness, gives a valuable picture of the time. Her father, Donald Cameron, a Forestry Commission gamekeeper, knew the Gaelic. As the Aberdonian head forester spoke Doric her father became of great assistance as most of the evacuees could speak only Gaelic! She went to school with some of the St Kildan children. Mrs Ball mentioned that the MacKinnon family were provided with a house at Larachbeg, but tragically many of their family died from tuberculosis. The MacKinnons were relocated to Mount High Forest in the Black Isle but Mrs Ball remained friends with daughter Mary.

The Forestry Commission hamlet of Mount High, on the south edge of the forestry plantations of the Black Isle
Photo: Black Isle Images

The trail can be followed in the records. From the 1935 Valuation Rolls, we see Norman as occupier of "House, Larachbeg No. 5" at Lochaline with the Gillies family members living in nearby houses.

The Forestry Commission was at this time developing its estate. The 1919 Forestry Act had set up the Commission following concern during the Great War that the national forest had shrunk to such an extent that the UK was dependent upon imported timber. The new body was given responsibility for woods in England, Scotland, Wales and Ireland, with the mission to rebuild and maintain a strategic timber reserve. The board of commissioners was for the first eight years chaired by Simon Fraser, 14th Lord Lovat. During the 1920s the Commission acquired land to begin planting new forests, but land purchase really took off during the Great Depression so that by 1934 it held an estate of over 360,000 hectares.

With this rapidly expanding industry, the Forestry Commission was the most convenient employer to provide jobs for the evacuated St Kildans, despite the islanders' unfamiliarity with tree production methods, or, indeed, trees!

The first purchases of Black Isle land by the Forestry Commission were in 1926, on land at Findon and Kessock, but it was in the 1930s that the extensive gains of Kilcoy and Millbuie lands were made, establishing the great tracts of forestry in the Black Isle. In March 1938, it was reported in the press that the Scottish Forestry Commissioners had purchased more than 5000 acres of land in the Black Isle district. About 300 acres had already been ploughed, and by the end of spring it was intended that 500 acres would be planted with conifers.

Clearly then, the forestry industry was developing in the Black Isle in a big way at the time. The Mackinnons, and Annie's elderly father Finlay Gillies, were settled in Mount High, that hamlet of Forestry Commission houses on the road from Newhall to Fortrose, on the braes above Kirkmichael and the Cromarty Firth. The houses were for Commission workers at Blackstand Nursery and Millbuie Forest (later the Black Isle Forest) as well as some of what were termed the "Road Squad". And so the St Kildans arrived in the parish of Resolis.

Norman, their son Neil (the last baby born on St Kilda) and their daughters Mary and Chrissie were all employed by the Forestry Commission, several in the nursery at Blackstand, a short distance up the steep road from Mount High. 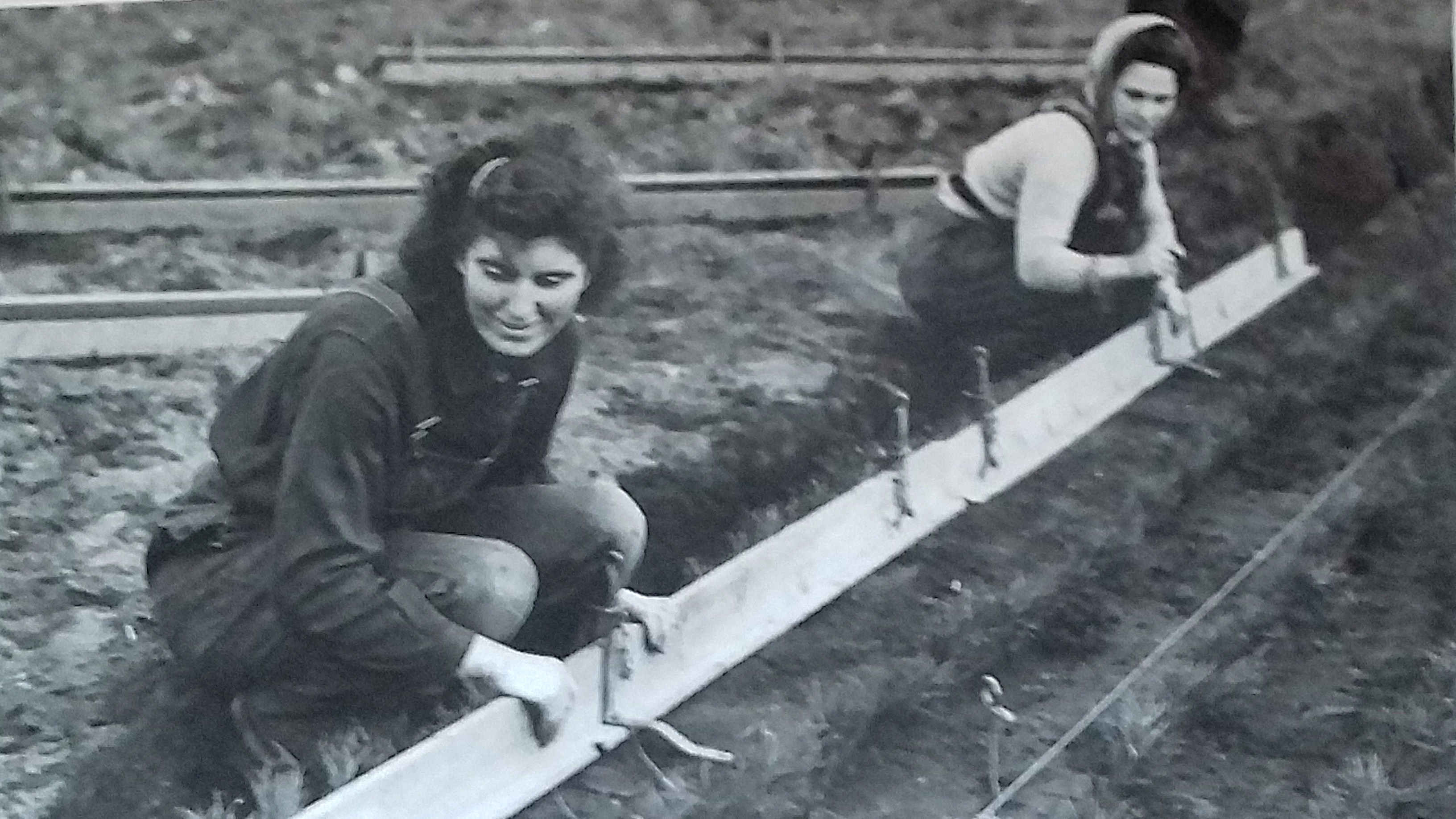 Chrissie, one of the daughters of Norman MacKinnon and Annie Gillies, hard at work in the Forestry Commission nursery at Blackstand
Photo courtesy of Joan Murphy

Neil worked as a tipper lorry driver for the Forestry Commission and can be seen in a couple of pictures of Commission staff events on their excellent on-line photographic archive. Have a look at picture 1856 and picture 3701. The latter shows Commission workers at a Christmas Party in 1957, and the complementary photo picture 3702 shows their children enjoying themselves, presumably at the same party. The location is "at Blackstand Black Isle" (this was a couple of years before the present Resolis Memorial Hall was built). The Blackstand Hall was called the "Rec" (presumably from the time it was the recreation hall of the aerodrome at Blackstand before the Forestry Commission took it over. What a great resource the Commission has created in its photographic archives!

St Kilda was gifted to the National Trust for Scotland in 1957, and became Scotland's first World Heritage Site in 1987, designated for both its heritage and its natural interests. The NTS summer work parties to carry out conservation work such as repairing and re-roofing buildings are famous.

Norman and Annie, and children Norman and Mary, lived at No. 2 Forestry Bungalows at Mount High when they moved from Morven. The two semi-detached bungalows at Mount High were therefore occupied by, on the one side, the St Kildans, and, on the other, by the Ross family. In due course daughter Mary McKinnon married James Ross next door and became Mary Ross. Their family of four children all went to Newhall Primary School and continue to live in and around the Black Isle. Some have returned to St Kilda and visited No. 1 Main Street where their grandparents lived. The kitchen has been done up for NTS staff, and the rest of the house is as it was. 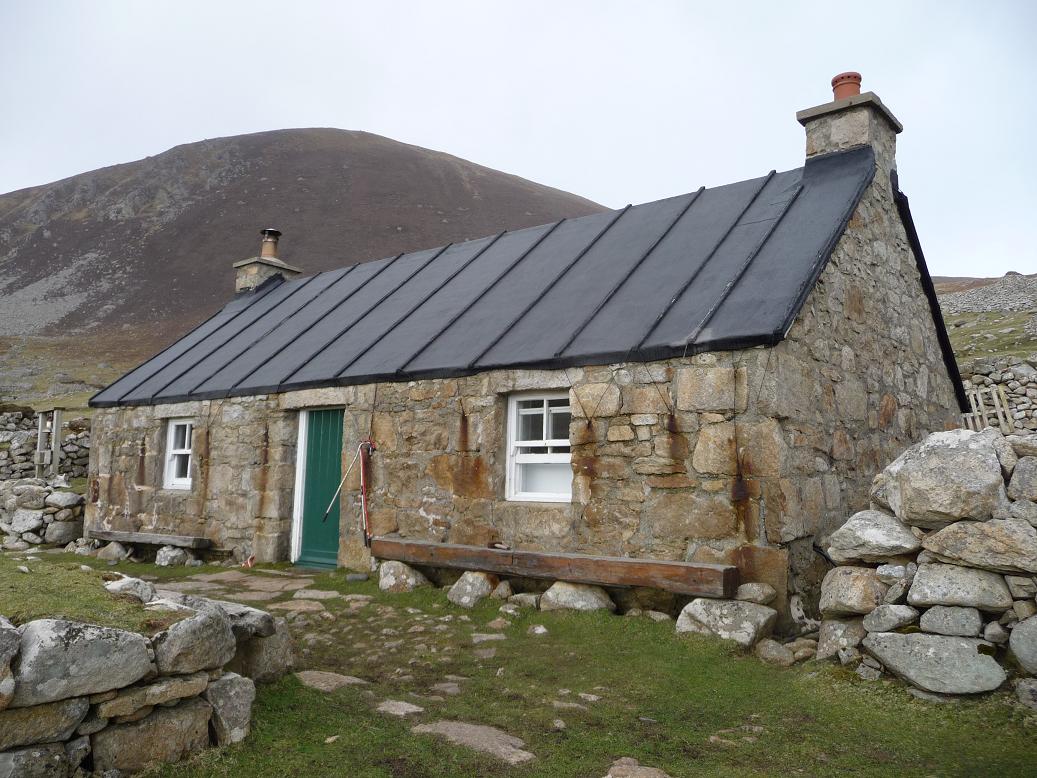 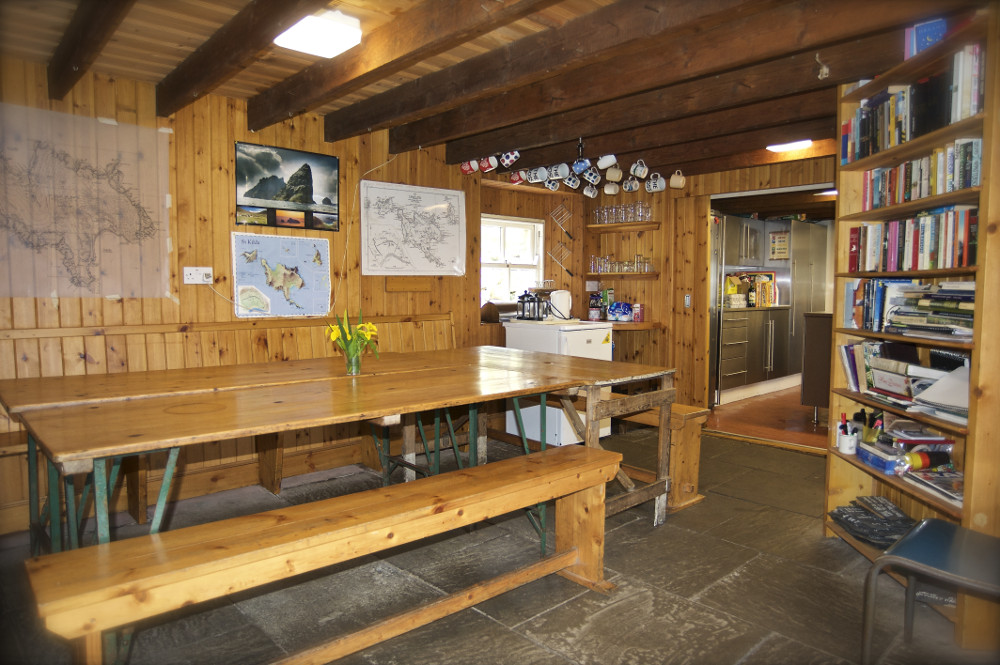 Both Norman Mackinnon and his father-in-law, Finlay Gillies, died in 1941, and the widowed Annie eventually moved in with her married daughter next door. Annie's son Neil, meanwhile, lived in the Forestry Houses, as opposed to the Forestry Bungalows, all these houses forming this Forestry Commission hamlet of Mount High, created for the workers of the Mulbuie and other forestry being established in the Black Isle. Annie, until she died in 1963, continued to reside at Mount High.

I was confused by the numbering and ages of the houses at Mount High until resident Anne Cooper explained it to me. “The original houses built for St Kilda people were built in the 1930s. These are two semi detached cottages (which were crofts with stables) and were once numbers 1 and 2 Mount High. The numbers have since been changed to 14 and 15. They are situated about 200 yards up from the newer houses along a forest track.” Thank you, Anne!

Their simple red granite gravestone in Kirkmichael bears an inscription that gives no clue as to St Kilda connections. 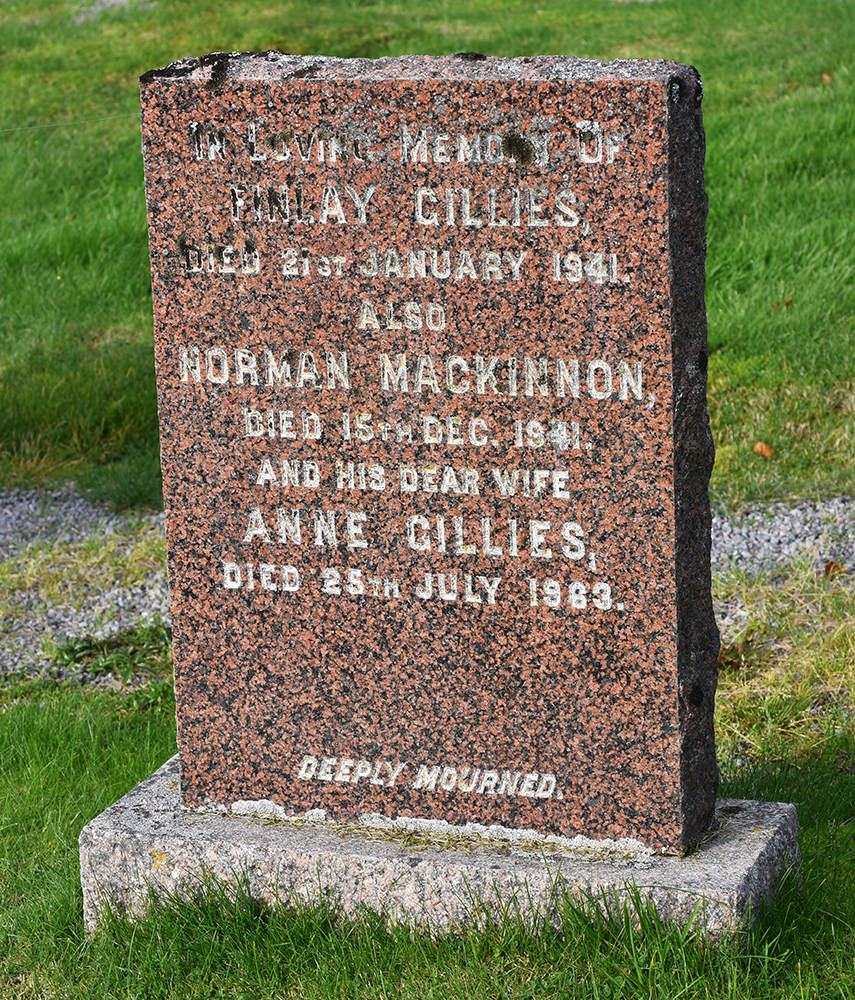 The red granite headstone in the modern section of Kirkmichael
Photograph: Andrew Dowsett 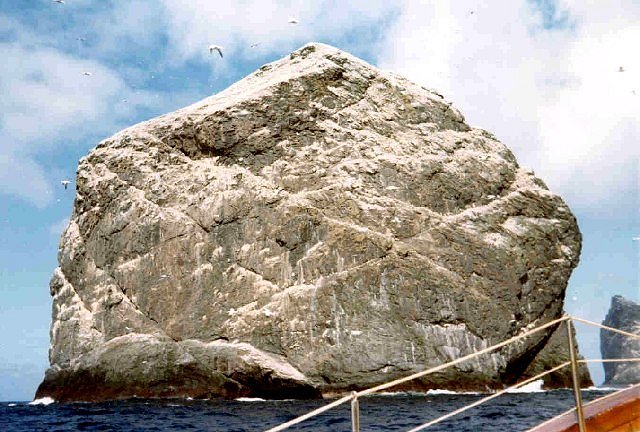 The rocky islands and stacs of St Kilda were formed from the granite, gabbro and dolerite left from an ancient volcano, forming the most distant outpost of north west Europe in the Atlantic. The granite gravestone at Kirkmichael commemorating three of the last St Kildans thus makes a connection with the distant islands where they were born.