In the former chancel of Kirkmichael is an extraordinary Urquhart memorial. In typical Urquhart style it is packed with information and symbols and is beautiful. The pious inscription, now partly lost, reads:

Here lyes the dust of WILLIAM URQUHART / of Brealanguell / son to Mr THO. / URQUHART & HENRETA DUGLAS of / worthie memorie who was born at / Esle in Morray the [space] day of March / 1660 & died at Brea. 16 Decr 1708 / Generally beloved in his life for his / uprightness & greatlie regreated his / death –Phi– To me to live is Christ & to / die is gain –Rev– Blessed are the dead who / die in the Lord – Thy dead men shall live / together with my dead bodie shall they arise / awake and sing ye that dwell in dust –Psa– / Surely he shall live for ever the / righteous shall be in everlasting remembrance. 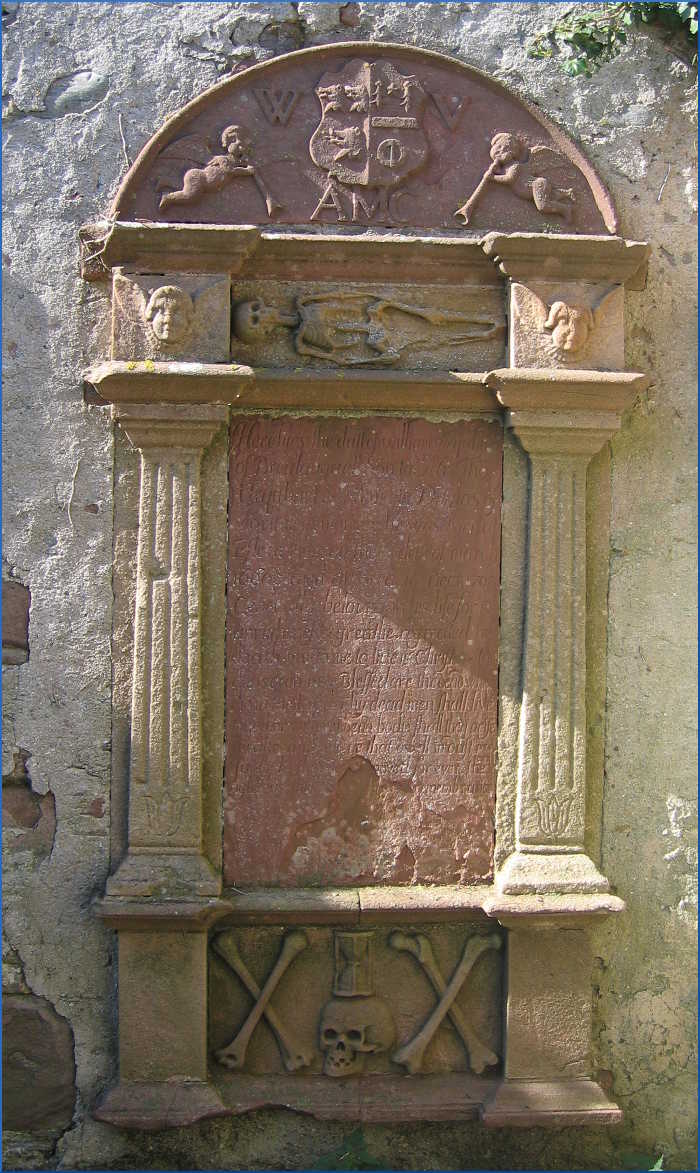 The Urquhart Memorial in Kirkmichael 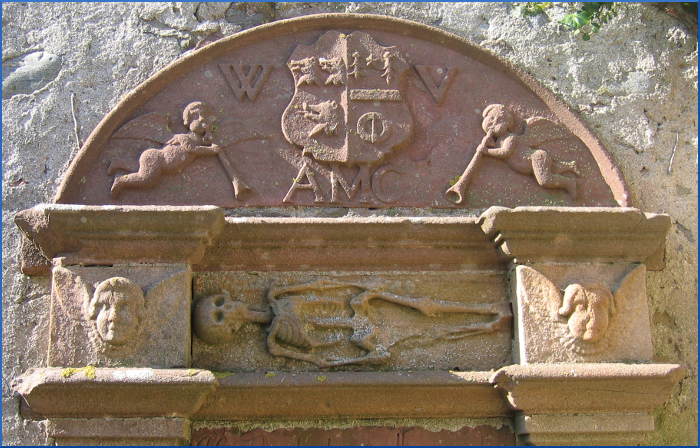 The Urquhart Memorial – the upper section

The symbols can be seen in our blow-ups: four cherubs, two blowing trumpets on the day of resurrection, lilies (see the pillars in main picture), a striking three-dimensional skellington, a most beautifully rendered hourglass, a skull tilted to one side to make it more realistic, and two sets of crossed bones (femurs and tibiae) that are so realistic they look like they are straight out of a coffin.

"WV", of course, is William Urquhart of Braelangwell. The initials "AMC" are those of his wife, Anna McCulloch of Plaids. The McCullochs held Plaids, just beside Tain, for several hundreds of years, and also purchased Kindeace, Glastullich and other lands in Easter Ross.

On the shield, on the left we have the three boars heads of the Urquharts – on some Urquhart stones these heads can sometimes look less like boars and more like wolves, but here they you can see the sculptor knew his subject, with snouts and tusks well carved. On the right of the shield is the crest of, I presume, McCulloch of Plaids, important land-owners in Easter Ross, with what looks to be a five-petalled flower rather than a star between two curious devices which I cannot interpret, although they look botanical, over a riband, and then a badge. The riband may have carried lettering or a date. The usual Clan MacCulloch shield is an arm throwing a dart (an arrow) so this stone is of considerable importance in showing the true arms of the McCullochs of Plaids. Update December 2020: the MacCulloch shield partly deciphered – I spotted that another local MacCulloch family who had a painted panel in Cromarty East Church used on the panel heraldic ermine (the stoat, white in winter) and those curious shapes on the Kirkmichael pediment memorial are now revealed to be heraldic ermine as well! See our story here. Moreover, now knowing from researching Anna MacCulloch that she died long after William Urquhart, it is clear that she would have been responsible for erection of this pediment memorial. 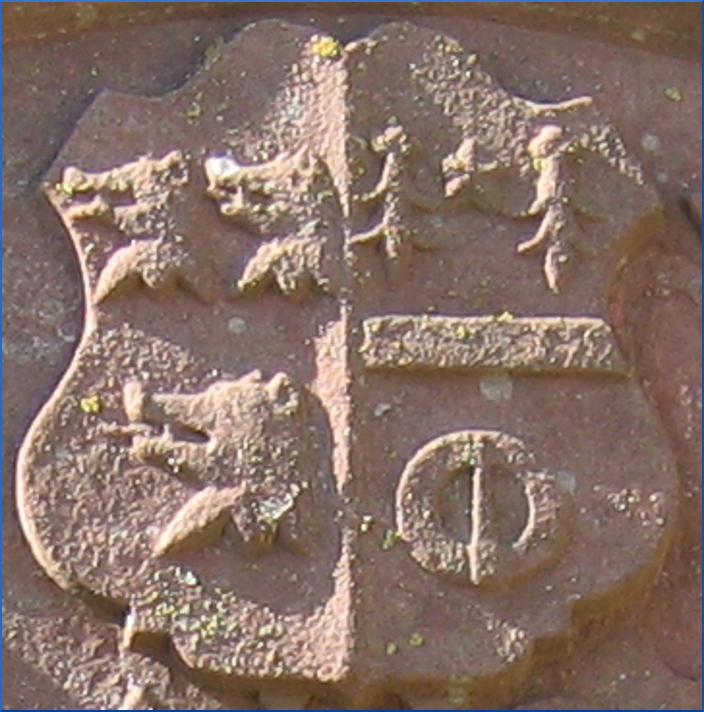 The Urquhart Memorial – the shield

The parents mentioned on the Kirkmichael memorial are well recorded. Minister Thomas Urquhart (–1685) had been the Minister of Dipple and then of Essil before being deposed in 1663 for not submitting to the church government. The parish of Dipple was amalgamated with Essil and part of Urquhart in 1731 to form the parish of Speymouth. Henrietta was the daughter to Sir William Douglas of Glenbervie Baronet.

The Fasti ecclesiae scoticanae description of the ministers of Essil includes the following.

THOMAS URQUHART of Braelangwell, son of Thomas U. of Braelangwell, min. of Arderseir; educated at King’s Collee, Aberdeen; M.A. (1651); became tutor to the family of Urquhart of Cromarty; studied divinity at Univ. of St Andrews; licen. by Presb. of Forres 16th Jan. 1656; had calls to Dipple and to Kinloss, and the Synod having decided in the favour of the former, he was ord. 13th Aug. that year; trans. and adm. 30th June 1658; dep. 19th May 1663, because he would not "own or submit to the present established government in this Church and kingdom." When the Presb. approved of a collection for James Sharp (afterwards Archbishop) in order to meet the expenses of his London and Breda mission in the Presbyterian interest, U. declared, 2nd May 1660, that "he would not give money to J. S. because he was reputed to be a man keeping up debates," whereupon he "was exhorted to walk more humblie and speak more soberly of eminent mins. of the Church." At a meeting of the Presb. of 26th Sept. 1660, he was admonished "for hearing a stranger woman pray in a minister’s family." He was imprisoned in Forres for some time in 1668 "for preaching in his own house and keeping conventicles," and for a like offence a decreet was obtained against him at the instance of Lord Advocate Nisbet on 16th July 1671. He died before 15th June 1676, having lost both speech and reason for some time. He marr. Henrietta, daugh. of Sir William Douglas of Glenbervie, and had issue – William of Braelangwell; John, min. of Gartly. – [Kirkton’s Hist., 284, 350; Wodrow’s Hist., ii., 112; Brodie’s Diary; Family of Kilravock; Covenanters in Moray and Ross, 101, 139; Laing Charters, 2667; Elgin Sas., v. 45.]

I note that the Ross and Cromarty sasines register indicate four sasines exist in relation to Thomas and Henrietta in the early 1670s which would definitely bear inspection. Similarly, there are 12 for William and Anna in the late 1670s, presumably on the death of Thomas, which could be usefully examined.

The religious extracts on the memorial in Kirkmichael are very appropriate given the line of ministers associated with the family.

While this memorial to William Urquhart of Braelangwell mentions his parents, Thomas Urquhart and Henrietta Douglas, there is no stone directly commemorating his parents.

During the Kirkmichael Trust’s guided tour of Braelangwell in 2014 Duncan Ross had pointed out a wallstone (a triangular window pediment) set into a wall in the garden. A similar wallstone bearing the initials MTV I had seen previously, and has moved within and outside Braelangwell House with different owners. Late in an evening in June 2016 a group of Kirkmichael volunteers descended on Braelangwell, courtesy of the current owners, Mr and Mrs Mitchell. Under the direction of photographer Andrew Dowsett, they assisted setting up a range of different angled lighting to maximise the information obtainable from the stones. 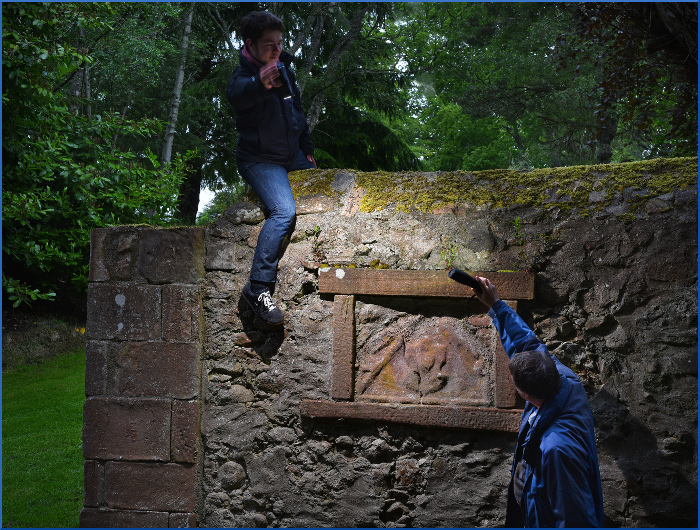 The "MTV" stone (Urquhart is always given as a "V") has at its point a broken fleur-de-lys with a five pointed star or mullet under each whorl. On the left and right sides of the triangle are typical wallstone devices that may be seen on the very similar Anderson stones in Poyntzfield. Above the shield is an "M" for "Master" or "Magister" signifying that Thomas was a minister. On the shield itself are the three boars heads of the Urquharts and two small devices which may simply be bosses. There is a flower to the left and to the right of the shield, the one on the right less eroded and bearing six petals. Above the basal ridge of the triangle is a date which, except for the final "3", cannot be distinguished. Logically it would be 1673, as Thomas Urquhart came into Braelangwell in 1670/72, but it cannot be definite. 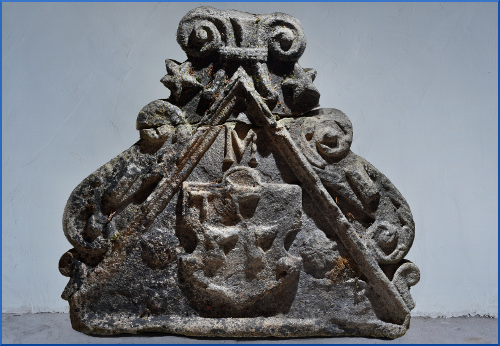 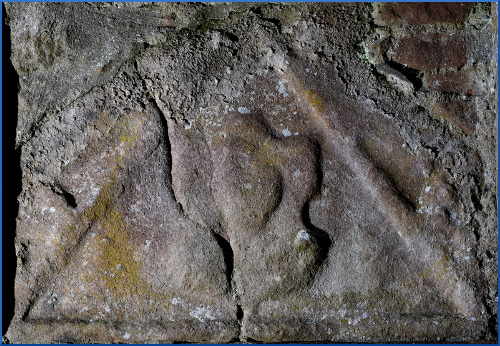 The window pediment in the garden wall was much more challenging to photograph as it has been so much more subject to damage from the elements due to being outside. The remnants of the devices outside the left and right sides of the triangle can be seen to be similar to those on the husband’s stone, and a shield is clearly there, but the symbol on the shield defied us for some time. My initial impression had been of a heart, but a shape above the heart distracted us for some time.

Eventually the penny dropped that the stone was probably the complementary stone to the "MTV" stone and would be in honour of Thomas Urquhart’s wife, Henrietta, daughter of Sir William Douglas of Glenbervie, 1st Bt. (they married in 1659). A check on the crest of the family of Douglas of Glenbervie, revealed that, like many Douglas families, it was a heart surmounted by a crown. The heart apparently was in tribute to an early Douglas who had carried Bruce’s heart to the Holy Land. Be that as it may, the heart itself was relatively clear on the Braelangwell stone. You would expect to see "HD" on the stone as well, and they may be represented by some of the raised elements, but they have long lost their detail.

So there we have it: we are fortunate to have in Kirkmichael the wonderful memorial to William Urquhart of Braelangwell which mentions his parents, Thomas Urquhart and Henrietta Douglas, and at Braelangwell we have window pediments to the parents themselves.

The pediments must have come from a demolished older house at Braelangwell, as the modern house was created in the late 18th century.

To put these Braelangwell stones into context, we can look at two other examples, one from outside the area altogether and another much closer – nearby in Poyntzfield.

Below is Path House in Kirkcaldy where there are three window pediments on the right wall – one bearing the husband’s details, the next the wife’s and a third the date of erection (1692). 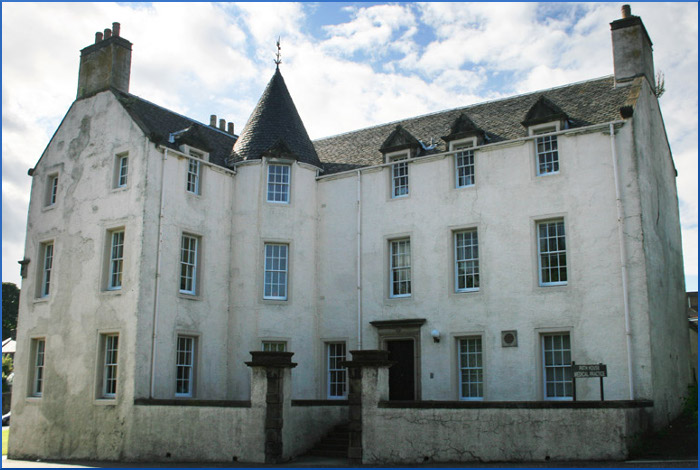 In Poyntzfield Herb Nursery lie two window pediments from a house in Cromarty which are very similar to those at Braelangwell. 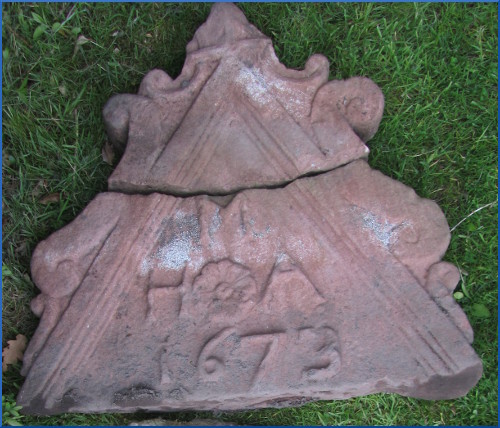 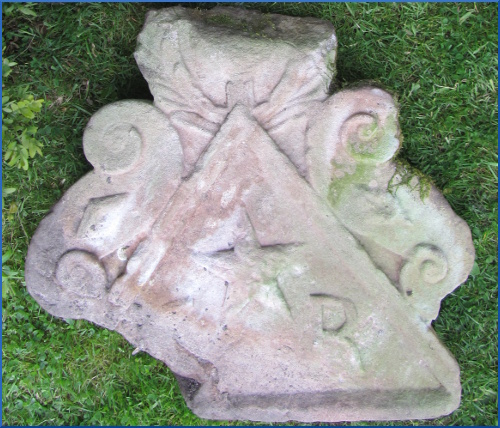 As in Braelangwell, the husband’s stone (the dimensions of the triangle) is slightly larger. The same devices are found on the left and right sides of the triangle, but while the husband’s stone is surmounted by a fleur-de-lys, the wife’s is surmounted by a very different device – a heraldic wreath. On the husband’s window pediment are "MHA" (Master Hugh Anderson (c.1633–1704) of Udol), a flower and the date 1673. On the wife’s pediment are GR (Grizel Rowe, the daughter of the principal of Aberdeen’s King College) and a star. The "G" segment has been broken in the relatively recent past and it is hoped to locate it sometime.

Hugh Anderson’s father was Gilbert Anderson "of Udol in this parish" (1597–1655), also a Cromarty minister and the subject of Sir Thomas Urquhart’s finest invective. These ministers had a hard time of it. Hugh himself, a firm Presbyterian, was deprived of his charge in 1675 and retired to Udale. He was in 1690 restored as minister and continued so until his death in 1704. He and Grizel Rowe are buried in a tomb adjoining the east gable of the East Church in Cromarty, but his window pediments somehow found their way to Poyntzfield. Both Poyntzfield and Udale were owned by the Gun Munros for a period in the 1800s and it is likely that it is this connection that resulted in their being moved to Poyntzfield.

One further one in Resolis is again a minister’s. I think from the text within the central triangle ("1682 REBUILT 1824") that it is either a reproduction in 1824 of the original, or, more likely, is the original which had "REBUILT 1824" added later.

It is now set into the gable of the house in West Brae. It bears a very simple exhortation from that famous covenanting divine, James Fraser of Brea, imprisoned at one time on the Bass Rock for his unflinching faith, to "FEAR GOD". 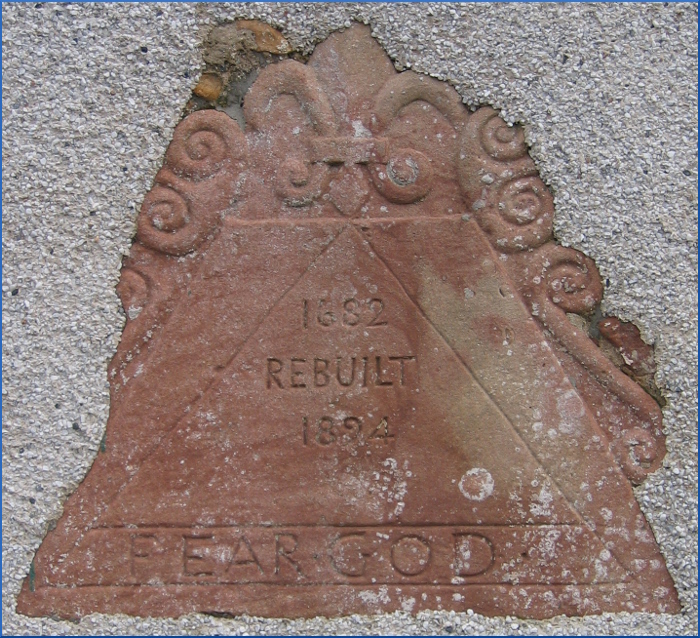