Close to the chancel door, buried in the turf, lay a shattered small headstone. It didn't look like much, but it proved to be the final memorial in Kirkmichael to a family who had lived in the area for well over a century.

The memorial mason whom we had hired to re-erect fallen headstones shook his head when we asked if he could repair it. The sandstone was rotten, most of the inscription had disintegrated, the foot was a separate broken stump lost in the graveyard soil. And this stone didn't form part of our conservation specialist's remit, being really a most undistinguished memorial. And yet ... this humble stone was key to commemorating an entire family line. 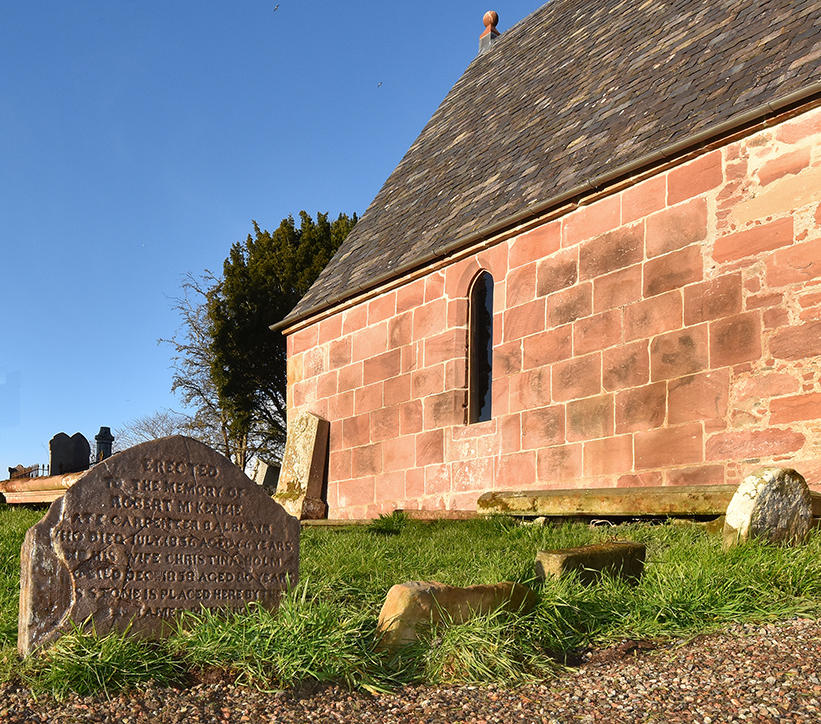 I gathered as many of the pieces as I could find and left them for several months to dry out in my garage. Then I cleaned off as much as I could of the grass root networks that had infiltrated the different planes of the sandstone. 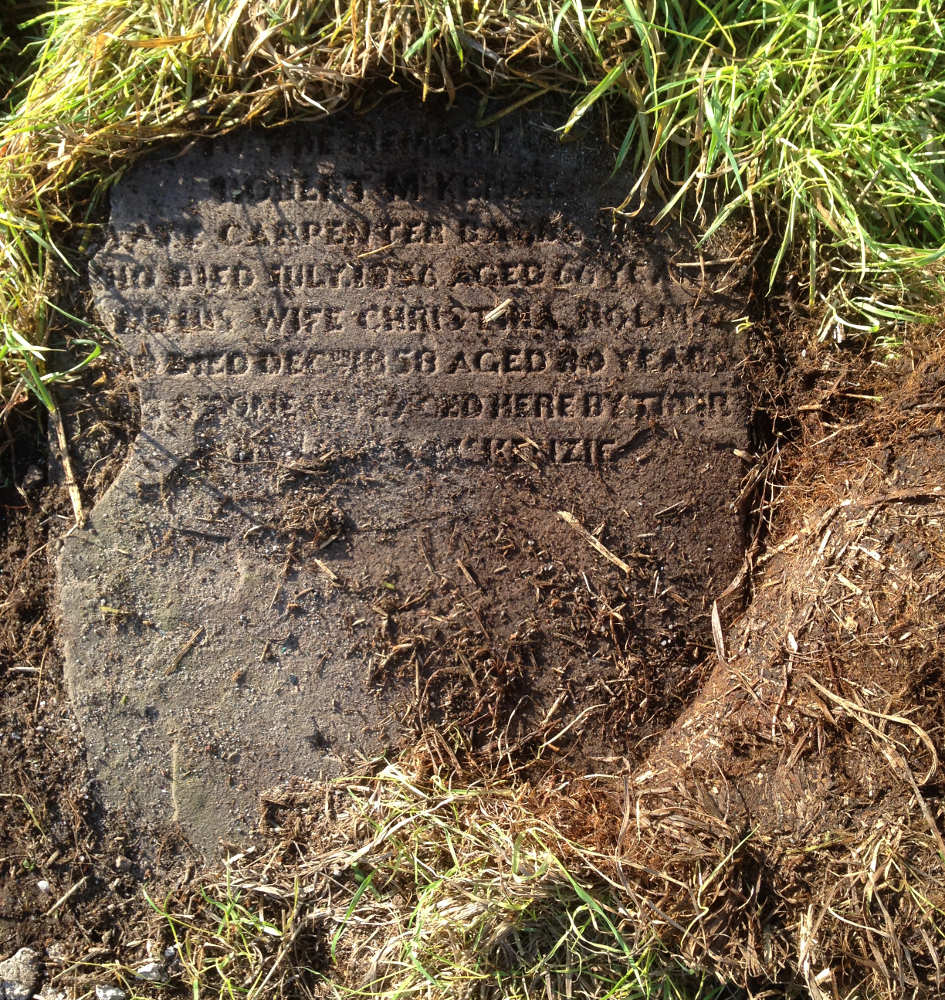 The broken stone crumbling away in the turf. Photo by Lynne McKeggie 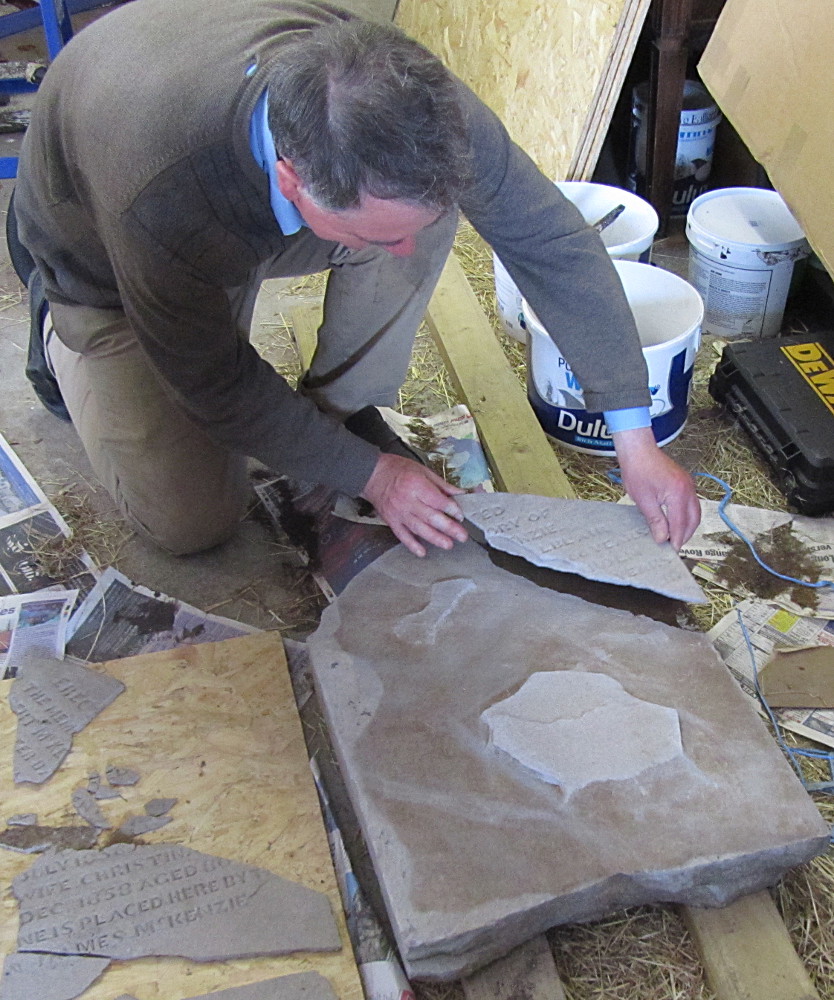 The first piece of the jigsaw carefully laid into place. Photo by Gavin Mackay

The inscription I pieced together and with conservation resin (the cost of which made my eyes water) I joined it like a jigsaw back together again on the main sandstone slab. Some odd bits turned out be half-letters, the position of which became clear when the larger segments were in place.

There were still cracks and cavities. I filled in some of the wider cracks with crushed sandstone soaked in resin, and kept pipetting resin into the narrower cracks until there were no cavities between the pieces into which rain could penetrate and expand as ice. With the top surface repaired, I then sank the stone, except for that top surface, in a tub of vinyl acetate to harden the stone and left to soak for several days, removed to dry, re-immersed, removed to dry, re-immersed and removed to dry. A long-drawn-out process! 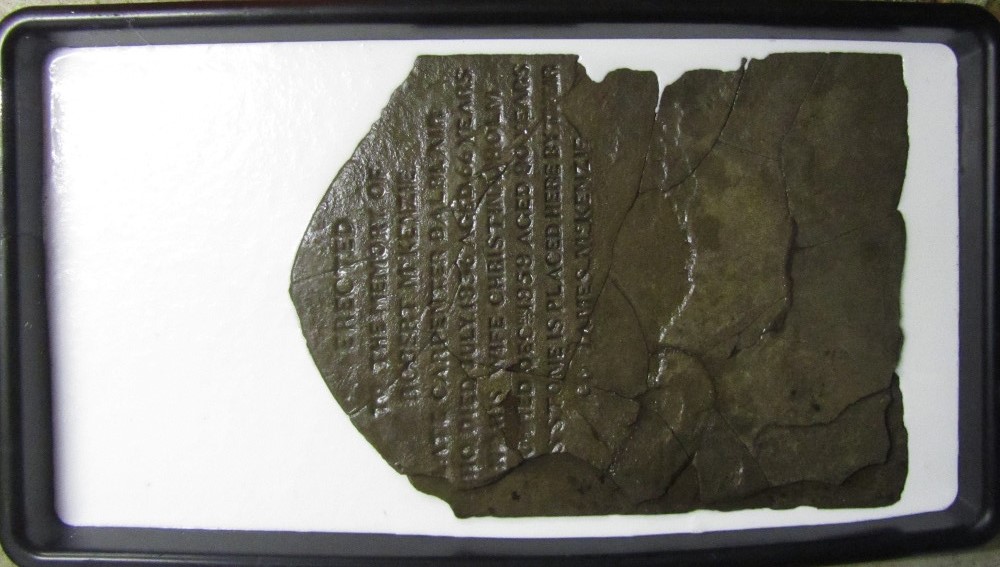 On snowy 25 November 2017, George and I returned the stone to Kirkmichael and re-erected it immediately behind its original stump, and it now forms once more the starting headstone of the line of small Mackenzie stones leading up to the chancel door. 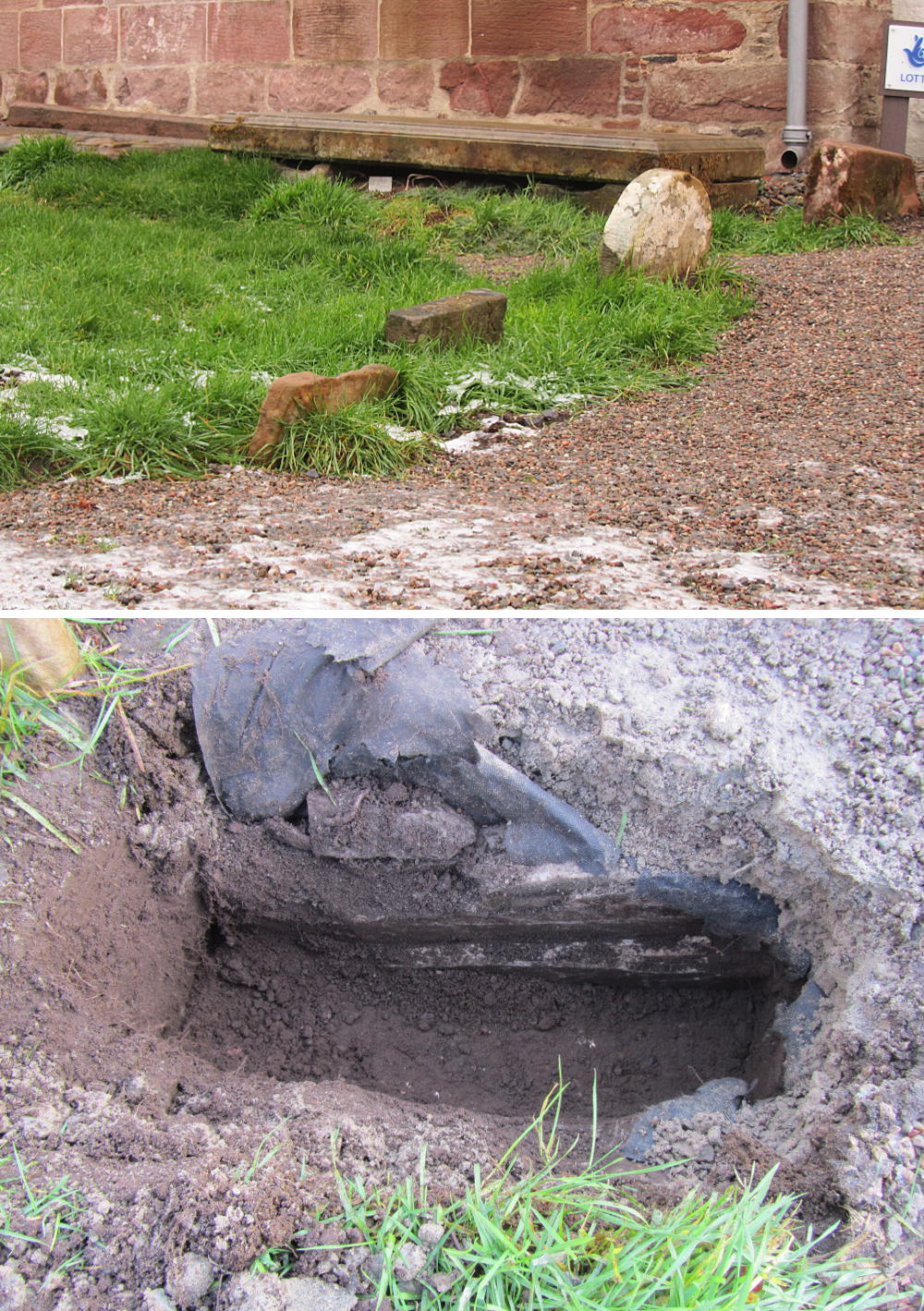 The site before the stone was restored, and re-locating the original stump of the stone. 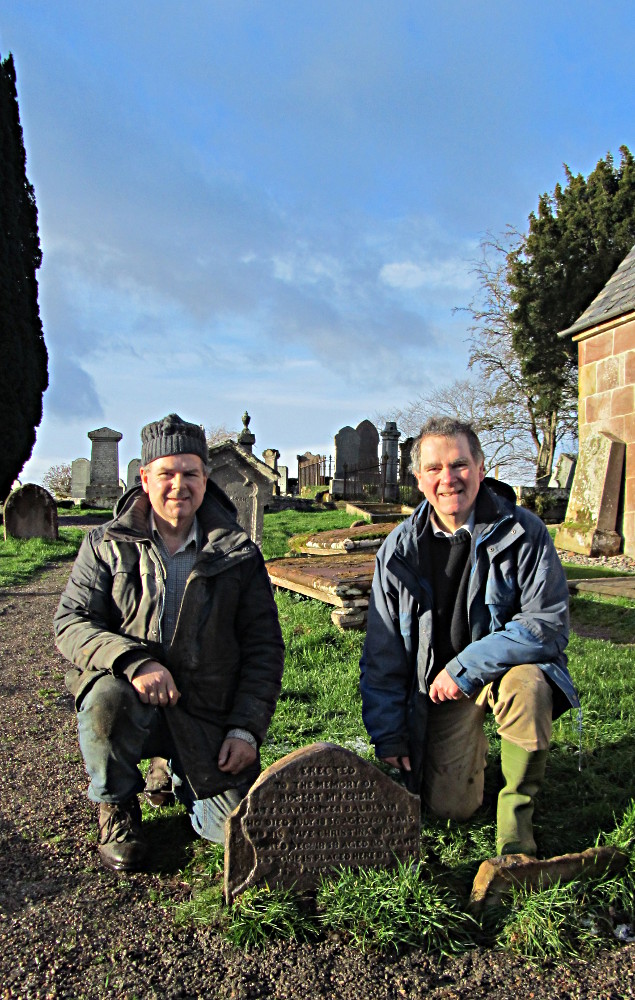 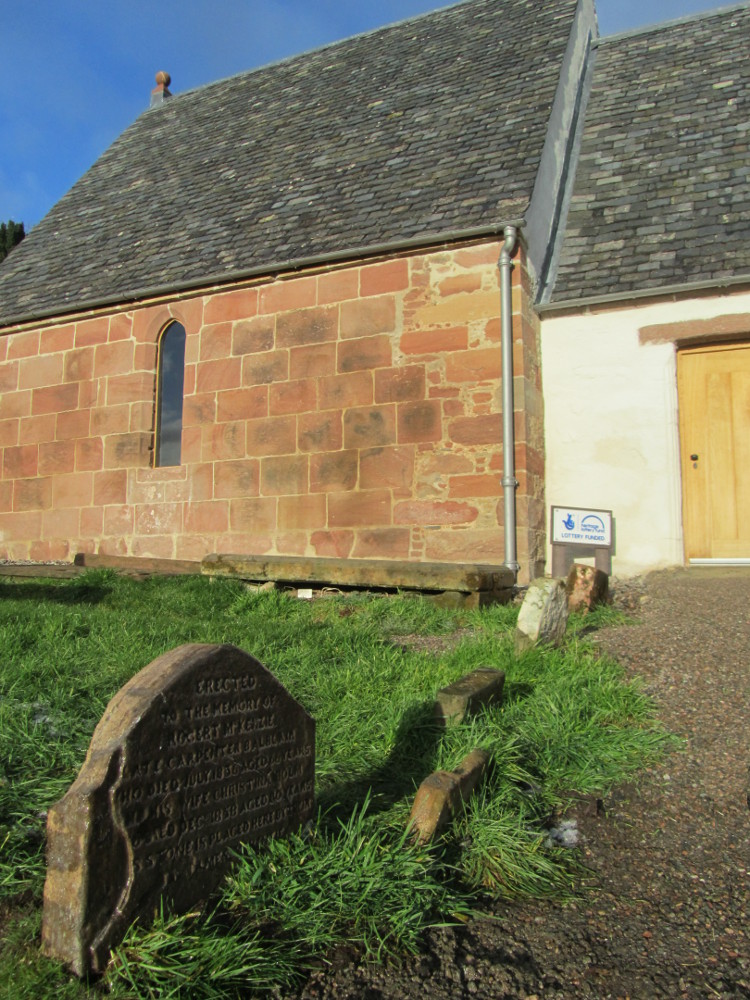 The restored text reads: "Erected / to the memory of / ROBERT McKENZIE / late carpenter Balblair / who died July 1836 aged 66 years / And his wife CHRISTINA HOLM / who died Decbr 1858 aged 80 years / This stone is placed here by their / son JAMES McKENZIE".

Our shattered headstone was the most southerly of that staggered line of five small, weathered headstones leading up to the western jamb of the chancel door. Was there a familial connection between any of these stones? The small thin stone immediately north just bears the initials "D McK" (presumably Donald McKenzie) and the remnants of a date --6?7 (possibly for 1767). However, the next two stones in the line we know are indeed related – one with initials "A McK / A R" is the stone for Alexander Mackenzie alias Bain, salmon fisher and labourer at Balblair and his wife Ann Ross, and the one next to it with "TF – AMK" represents Thomas Fraser and his wife Ann Mackenzie, daughter of the aforementioned Alexander Mackenzie alias Bain and spouse Ann Ross. I would assume, but have no proof, that Alexander Mackenzie alias Bain and Donald Mackenzie alias Bain (the father of the jigsaw stone's Robert Mackenzie alias Bain), were brothers. The final stone, close to the chancel door, is badly spalled, although there may be some information yet to be found at depth. However, given the first four stones in the line are McKenzie stones, then it is very likely that this one is a McKenzie stone as well.

The family as a whole appear to have been, while not well-to-do, financially stable. In the period covered by this group of stones, the late 1700s to the mid 1800s, the great majority of people were buried at Kirkmichael without any memorial at all. The family therefore were somewhat above the usual farm workers and sub-tenants. Looking at the family tree, we see a tacksman, tenants and tradesmen. Robert in 1799 was one of the relatively few in his social group within Resolis paying tax (2/6) in the Coordinated Tax of that year. However, in their old age several of the family do appear on the paupers' roll indicating just how important that social safety net was for the elderly.

The genealogist researching the family has the additional difficulty of several generations being afflicted by the patronymic or "alias" of Bain, sometimes, just to make matters worse, spelled Bayne. Some families actively resisted an alias, but this family of Mackenzie alias Bain seems to have embraced it. The marriage record of Robert and Christina in 1805 refers to him only as Bain, but in subsequent baptisms he is mentioned as either McKenzie or McKenzie alias Bain. That particular generation is even more challenging as Christina is sometimes given as Christian, Chisty and eventually Widow McKenzie. Subsequently, their daughter Helen, who married ploughman William Munro, is often as not called Bain in the records. The difficulties that an alias causes! However, this is what I take from the records, with our gravestone couple in the centre: 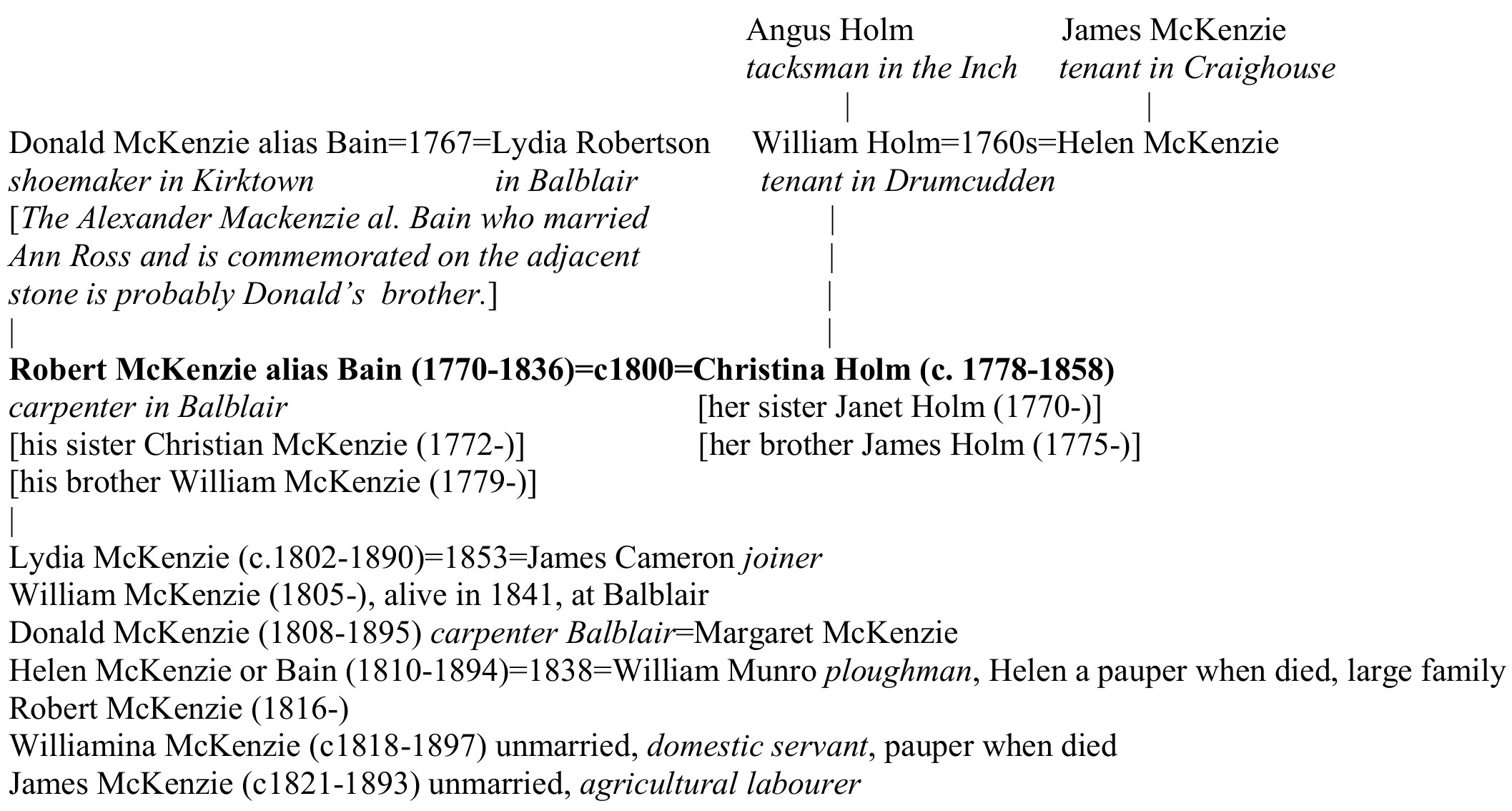 The relatively unusual "Lydia" first appears with Lydia Robertson, and recurs with grand-daughters, all with variants such as Liddy and Lydias.

I do not know if there are descendants of Robert and Christina, as they seem to have had one of those families where several siblings didn't marry and others don't appear to have had many children, one at least because she married late in life. However, I note that Helen or Hellen, who married ploughman William Munro, had quite a few children, so there may well be some descendants.

Please let us hear from you!